I am having trouble when trying to restore from one Windows 10 laptop to another.

I'll start by saying that I am not an advanced user. I have been using True Image only for a couple of months now, and I have never had to recover, so I am hoping that I am doing something incorrect on the restore process.

Summary: my HP laptop will no longer boot as it was damaged by a lightning strike surge. Therefore, I am trying to recover to a new Dell laptop. Fortunately, I performed an image the day before my laptop was damaged. I have the image on an external drive, and I have Universal Restore loaded on a flash drive. Both laptops are windows 10 with SSDs. The issue that I am having is that once I try the True Image restore and Universal Restore process on the new laptop, the new laptop does not boot. Universal Restore only shows 1 warning for a driver that cannot be loaded, so I ignore it, and Universal Restore has the status of Succeeded so I am not sure if this specifically is causing the boot issue. (Driver: pci\ven_8086&DEV_9d2f&subsys_08101028&rev_21).

Here are the steps I followed while doing the TrueImage restore and Universal Restore process. Most of this is from my memory, so hopefully, this is descriptive enough to communicate what I did. I have not done a full system test to make sure that all of my hardware and software is working as intended, as I did not want to get too far into this in case there is a better solution.

Any advice would be appreciated as the reason I purchased True Image was to be able to recover when needed.

Be it a disk clone or a system clone, both of the backups can be created and transferred to other devices i.e. another computer or SSD. The issue appears when you are creating a backup of one device and then restore to different hardware. The error occurs, in this case, is termed as incompatibility error and it will not support the boot mechanism of the new device. To deal with this recovery to dissimilar hardware or incompatibility error, you need a third-party application software support i.e. universal restore software. This article would be telling you about the scenarios in which you have to restore to dissimilar hardware along with the reasons and a software solution with which you can proceed to perform the task. Here are the topics that would be discussed in detail.

Part 1: What Is Restoring Image Backup to Dissimilar Hardware?

In a case like this one, where you have to transfer the operating system i.e. a system image with all the related applications, system drivers, and updates, restoring this image backup to dissimilar hardware is difficult. You can transfer it, but due to different configurations, you cannot process the data. The BSOD (blue screen of death) will appear. Your new device will pop up an error message i.e. Stop 0x0000007B Inaccessible_Boot_Device. This is due to problems related to the operating system’s drivers.

You can transfer the operating system by creating a bare-metal system image backup on your device. Once done with creating image backup, now you can restore to different hardware via bootable media.

Scenario 2: Deploy the same operating system to many computers

If your device is working in a network, and the goal is to upgrade the operating system for all the devices, then as an administrator, you would be confronting an issue. Not all of the devices may be using the same hardware.

In such a case, go for creating a master system image on the source device and save it to NAS/network. Now next step is to employ that operating system to al devices in a loop. This could be done via PXE network booting.

In disaster management plans for securing the data, if your device crashes or fails to run the program, you can restore to different hardware. You can perform a bare metal recovery and avoid the data loss.

Apart from this, the restore to dissimilar hardware windows 7 can be employed for cases like physical-to-virtual (P2V) and virtual-to-physical (V2P) migration or if you have to upgrade the device hardware before the old one gets completely dysfunctional.

Part 2: Why Need to Recover System to Computer with Different Hardware?

Once you are familiar with the scenarios in which you can backup and restore to dissimilar hardware, then the next step is to know why you have to go for this process. Here are some of the essential reasons that would explain why you need to recover the system to a computer with different hardware.

In case if you confront a system failure or your device crashes, so to maintain the integrity of your data, you can create a system backup and then transfer it to another device even with dissimilar hardware. All you need is a third-party application software for performing the function.

Bare Metal is an easy approach for transferring system backup image from one device to another with dissimilar hardware.

3. Migrate system to another computer or virtual machine:

If your goal is to install the systems between your device and any virtual machine, then by applying all the rules for transferring to different hardware one can restore to dissimilar hardware windows 7.

Changing the hardware i.e. motherboard or CPU, your device requires system reinstallation. So to avoid the reinstallation process you can create a system image and then restore to different hardware (the new one).

Part 3: How to Restore Image to Dissimilar Hardware?

Coming towards the practical region, creating image backup and then restoring it to different hardware i.e. backup and restore to dissimilar hardware can be performed with the help of third-party application software. In this regard, AOMEI backup professional is your deal. It is one of the best backup software that facilitates to create both the disk and the system clone in no time.

Before heading towards the steps, two essentialities apply:

Step 1: Start the process by downloading and launching the software on your device. 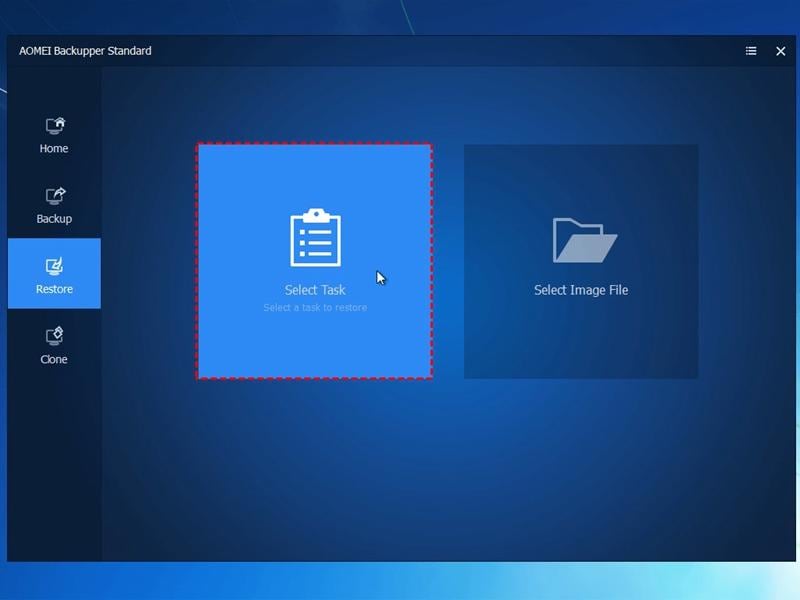 Step 4: Now in the desired location, select the backup image and click next to continue. 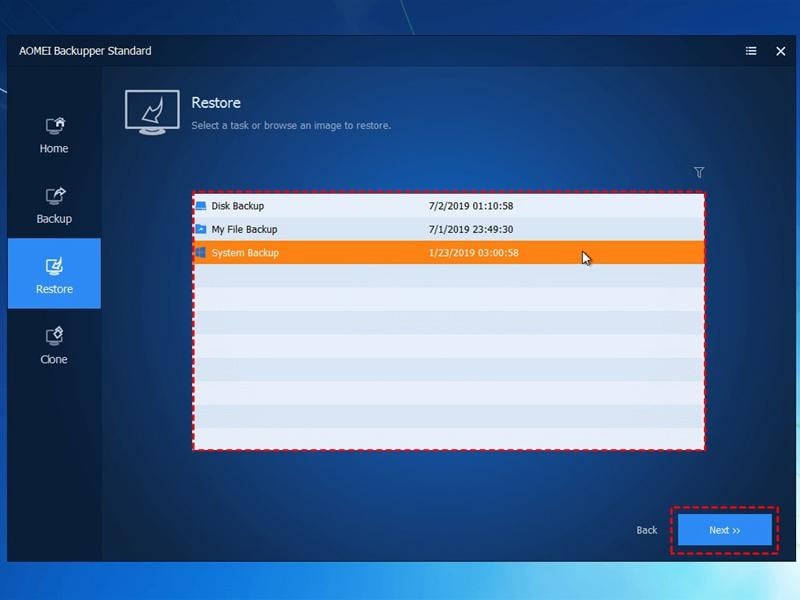 Step 5: Select the option of restoring the entire backup image o partition and click next to proceed. 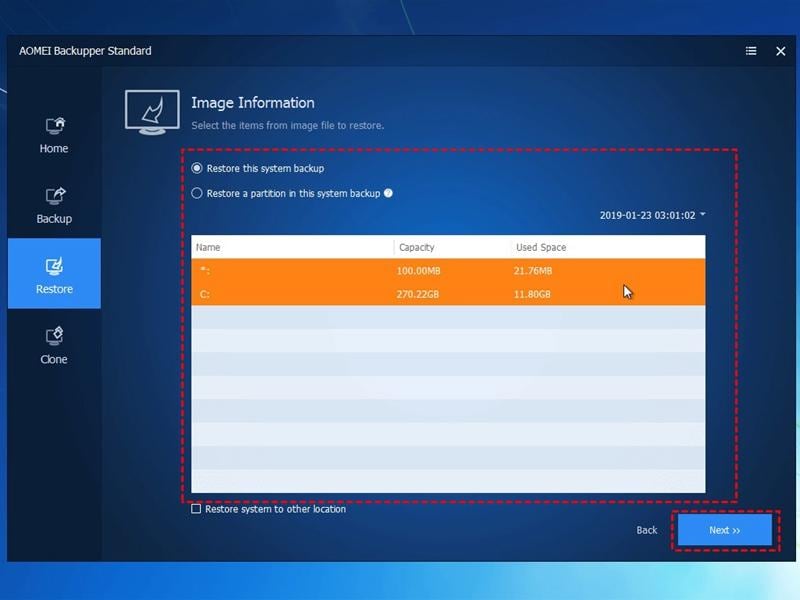 Step 6: Next page to appear would be the operation summary page. Preview it and check the box i.e. enable universal restore. Click start restore to continue. 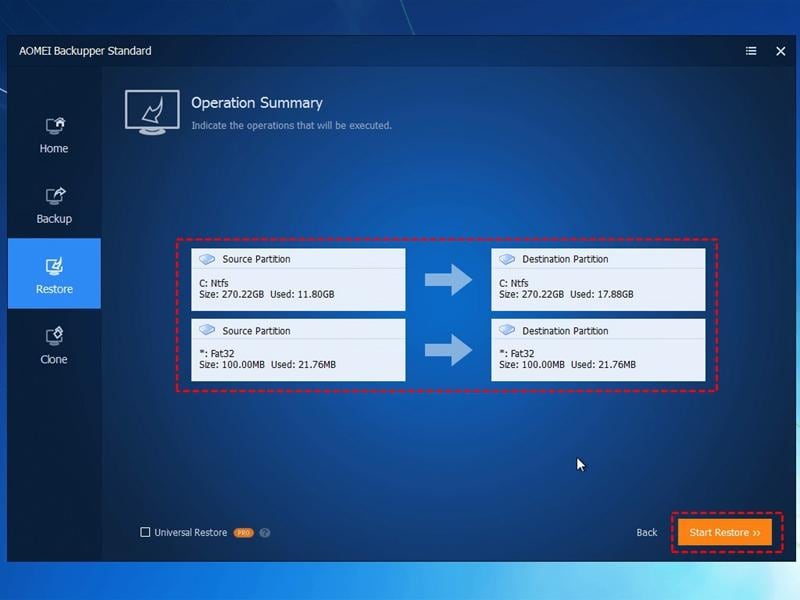 Once the restore is completed, the system image would be restored in different hardware.

Hence, creating backup images either for system or disk and then restoring them is not a difficult task to perform, but at times when the image is restored in similar hardware. Sometimes, due to sudden system failure or any disaster, you may confront a situation where to avoid data loss you have to create a system or disk backup image and you have to restore to a different/dissimilar hardware. The same goes for a situation if you are dealing with a system up-gradation in a network of devices where they have different hardware. So to back up and restore to dissimilar hardware is completely practical, the only thing you need is a third party application software support. AOMEI back upper professional is an all-time recommendable software. It comes with a feature i.e. AOMEI universal restore that serves the purpose.