Is There Any Difference Between RAID 10 vs. RAID 01

Data storage has always been quite delicate when it comes to managing and securing drives and storage points across the computer. Different versions of explicit technologies have been introduced in the market, which featured protective measures for allowing users to make sure all of their data is kept safe under risky situations. RAID or Redundant Array of Independent Drives is a technology that consumes the technology of two or more drives working together in parallel.

RAID did not come up with any standard for the market, providing the industries and companies with their own obligations of setting up RAID according to their conditions. This article shall help its readers with differentiating RAID 10 and RAID 01 under appropriate points. It would be easier for you to understand the superior version of RAID after going through this article.

Before we proceed towards discussing the variating characteristics of RAID 10 and RAID 01, we recommend you to be aware of the basic concepts involving both RAID technologies. This part shall discuss the overview of RAID 10 and RAID 01 generally and provide the users with an in-depth knowledge of these concepts.

RAID 10 is a combination of RAID 1 & 0 or the combination of disk mirroring and disk striping in concept. This technology was developed by merging the characteristics of RAID 1 & RAID 0, thus becoming the first nested or hybrid RAID combination. This configuration is responsible for holding a minimum of four disks and striping the complete data across mirrored pairs.

Under such a configuration of mirrored pairs and disks, it is evident that data can be retrieved from this arrangement even if one mirrored pair is functional. However, it should be clear that two disks failing across a similar mirrored pair will lead to the loss of data since there are no parities across the striped sets. RAID 10 is referred to provide a better and secure system as compared to other configurations present in the market. 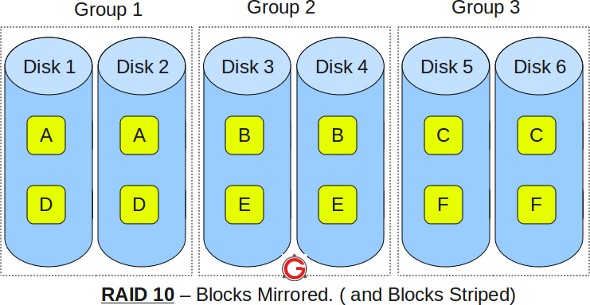 RAID 01 is another nested combination of RAID levels, 0 and 1, in this order. It is known for offering data sharing and replicating characteristics within its system. The major functioning of the RAID 01 system features mirroring capabilities across RAID 0 arrays or striped mirrored sets. RAID 01 is quite similar to a RAID 1 configuration, where it is responsible for saving half of the disk capacity for mirroring data and the other half for storing it.

To understand more about RAID 01 configuration, it should be considered that it stripes multiple disks into sets that are mirrored together. However, it is of keen notice that RAID 01 stops functioning if one drive from each of the disk’s ceases. 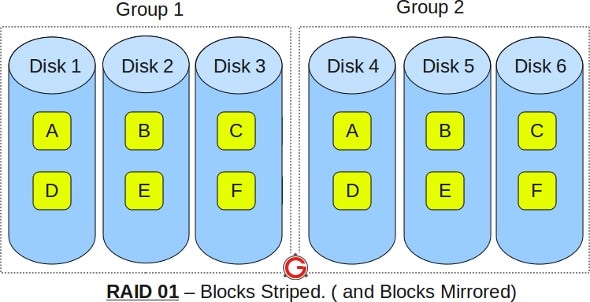 RAID 10, also known as RAID 1+0, is theoretically mentioned as a "Stripe of Mirrors." This configuration operates properly across a minimum of four disks, where each disk is pair in two for mirroring. This can be understood from the fact that under 6 disks, RAID 10 would have three groups developed.

The data within the group is mirrored across both disks, which means that if a certain group has Disk 1 and Disk 2 contained in a group, the data across Disk 1 would be exactly the same as in Disk 2. The groups, however, are striped.

For RAID 01, it is a nested configuration of RAID 0+1 and recalled as a "Mirror of Stripes." Although it can work perfectly across three disks; however, it is implemented mostly across four disks. For this, you need to consider six disks which are arranged in two groups of 3 disks.

The data across each group is striped, where every block is associated with a different disk. Across the group, the data is mirrored across the disk that has the same block as in the first group. This is the reason why it is referred to as a mirror of stripes in theory.

Part 3: What are the major similarities and differences between RAID 10 and RAID 01?

Under such circumstances, it is preferred to utilize RAID 10 as the effective configuration for disk management. The configuration is more unique, cheap, and simple as compared to other techniques.

File recovery is an important process that needs to be kept in mind after files are lost, corrupted, or accidentally deleted from the computer. Although it is preferred that users should avoid such circumstances at any cost, there are platforms that feature services of recovering lost data from external and internal devices.

To easily recover lost data from your hard drive, Wondershare Recoverit provides its users with the extensive recovery of lost and deleted data. Users can recover original and complete files off the recovery process from Recoverit. It offers recovery across 1000+ different kinds of file types and formats. Recoverit has made a very extensive image in the market for its high recovery rate.

It is very easy and convenient to recover lost data from hard drives. To execute this, the user needs to follow a set of steps that would allow them to recover their required files with ease.

You need to download and install Wondershare Recoverit on your computer. Following its installation, launch it on your device and proceed towards the screen that opens up.

Step 2: Select Location to Recover From

Proceeding with opening Recoverit on your device, select the location of the hard disk from where you wish to recover the data from. After successfully selecting a location, you need to tap “Start” on the bottom-right of the screen to initiate recovery.

The platform takes a while in scanning the lost and deleted files from the selected location in real-time. After all the files are displayed in front of the screen, the user can select any file and preview it before recovering it across the device.

Once you are done previewing the files, select any file and tap on the “Recover” button after selecting the appropriate location where you wish to save your file. Once executed, you have successfully recovered the files from your hard drive back into your computer.

Data management is a very important process that needs to be carried out at all costs. To avoid having your data deleted from the device, you employ different precautionary measures and techniques. One such measure is employing RAID as your base configuration. To effectively manage your drives and data within them, it is vital to recognize the best configuration.

This article has discussed the configuration and differences of RAID 10 and RAID 01 and has provided users with a clear understanding of which would suit them the most. We hope that you would have all your questions answered with clarity.

If you are in search of performance and redundancy, RAID 5 provides the best configuration as it sustains a complete loss of a drive without losing data.

This is a firmware-based RAID solution that has been constructed into a large number of Intel chipsets with the capability of managing RAID 10, 5, 1, and 0.

It is known that a certain configuration is better under the dependency of what the user requires from the configuration. RAID 0 offers a fast transmission of data with no fault tolerance, while RAID 1 offers to mirror, i.e., to save data across multiple drives.

> Resources > Windows Computer Solutions > Is There Any Difference Between RAID 10 vs. RAID 01