In the following article, we help users operating different variants of the Windows OS to use the Scandisk Command with ease.

In the following article, we shall assist our users who are looking to make good use of the Scandisk command in the Windows Operating System. Before we move on to the specifics of the topic, you must develop a precise understanding of how the Windows Operating System works. Don’t worry, we won’t dig into the basics of Windows OS, but merely learn about the commands that make it so special. As a Windows User, I have found the OS Commands to be pretty helpful in times of crisis. While some of the users may feel skeptical and end up comparing the Windows OS with MAC or Linux, there is no denying that Windows has created a pretty impressive interface with built-in commands for its users. The following article deals with one such helpful functionality, which happens to be the Scandisk Command.

Part 1: How to run the Scandisk Command in different versions of Windows

In the following section, we look at how to run the Scandisk command in different versions of Windows.

We recommend the following steps when you wish to run the Scandisk command in the above-listed variants of Windows:

Before you question our love for the primitive Windows variants, it is important to note that even today; some very advanced users prefer MS-DOS when it comes to ensuring the success of their programs and applications. So, to help our user segment, we list out the steps that can help them with the Scandisk Command.

Scandisk was introduced with MS-DOS 6.2, and it has been here since then. For the ones running MS-DOS 6.2 or 6.22, here are the steps to run Scandisk;

The importance of the Scandisk command cannot be ruled out in any Windows variant, especially if users are looking for the flexibility to check their drives and local hard-disks for errors and issues. For the ones who are unsure as to how to run the Scandisk command on their systems, we have listed out all the possible steps with simple instructions. If you have some alternate techniques for the same or used on of the above-listed methodologies, do share your experience with us in forums.

Part 2: What is the Scandisk Command in Windows Operating System?

Microsoft Scandisk command is essentially a diagnostic utility that has been included in MS-DOS and Windows 9X. While its brilliance lies in the fact that it can check file system errors on the disk drive, it is crucial to know that this command came as an advanced successor to CHKDSK. The command was first introduced in MS-DOS 6.2.

Scandisk overshadowed its predecessor (CHKDSK) because of the more user-friendly interface it came with, multiple configuration options, and most importantly, the functionality that was critical to detect and in some cases even recover the physical errors on the disk. This was helpful for the users in those times as it replaced and enhanced the limited functionality that was otherwise offered by the MS-DOS Recovery Utility. Scandisk command could also manage to repair cross-linked files, something that wasn’t possible with CHKDSK, thus appealing to more users.

From the onset of Windows 95, the Scandisk command also came with an engaging Graphical User Interface along with the text-based user interface that was being made available for the users working in single-tasking DOS mode. 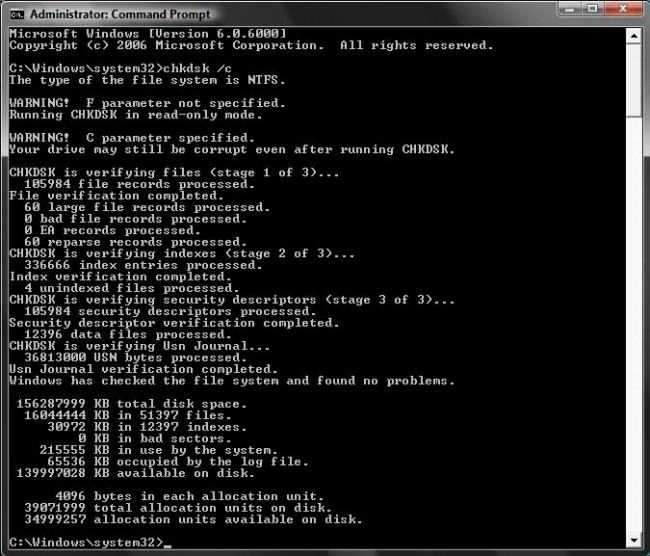 Alongside, it is important to note that Scandisk cannot check the NTFS Disk Drives, and hence, it has not been made available for computers that run the NT based versions of Windows, and instead, users are provided the CHKDSK command to comply with. This command is relatively new, and shouldn’t be confused with the earlier MS-DOS CHKDSK Command.

In the following section, we look at the benefits of using the Scandisk Command: