How to Delete Memory Dumps to Free Up Space

Memory dumps are made by Windows whenever your computer crashes. Learn how to delete memory dumps to free up space.

Memory dumps are made by Windows whenever your computer crashes and you see a blue-screen appearing in front of you. These dumps contain copies of the memory of the computer system when it crashed. The memory dumps are stored in the form of a paging file on the computer system and can help in the identification of the reasons and the issues that were responsible for the system crash. There are various types of memory dumps that Windows can create. Depending on their type, memory dumps can be quite large and take up a great deal of space on your hard drive. If you want to clear out this space, then all you have to do is to delete memory dumps.

Part 1. How to Delete Memory Dumps

If you have had a blue-screen a while back, you should have a memory dump file sitting on your hard drive. Since memory dumps contain copies of a good portion of your computer’s memory, this .dmp file might have a file size of up to 800 MBs. If you are experiencing a shortage of memory on your hard drive and want to free up some of the space, then deleting these memory dumps would be a good choice. However, the memory dumps are buried deep into the Windows folder and you would have to dig deep to find them.

More ways to free up space:
6 Ways to Delete Folder on Windows/Mac
The Quick and Easy Way to Delete Windows Update Files
How to Automatically Free up Storage Space with macOS Sierra

You can delete memory dumps quite easily by using the Disk Cleanup utility offered by Windows. However, there is a chance that the space occupied by these memory dumps isn’t completely vacated even after they have been deleted using the Disk Cleanup utility. The only way to be perfectly sure that the memory dumps have been permanently erased from the hard drive is by making use of a data erasure tool. Such tools are capable of erasing all types of data from the hard disk. However, not all tools which claim to erase data are reliable.

There are only a few that do the job as per requirements. Stellar BitRaser for File is a data erasure tool which can delete memory dumps from the hard disk forever and ensure that it isn’t recoverable.

Step 1. Download and launch Stellar BitRaser for File on your Windows computer. 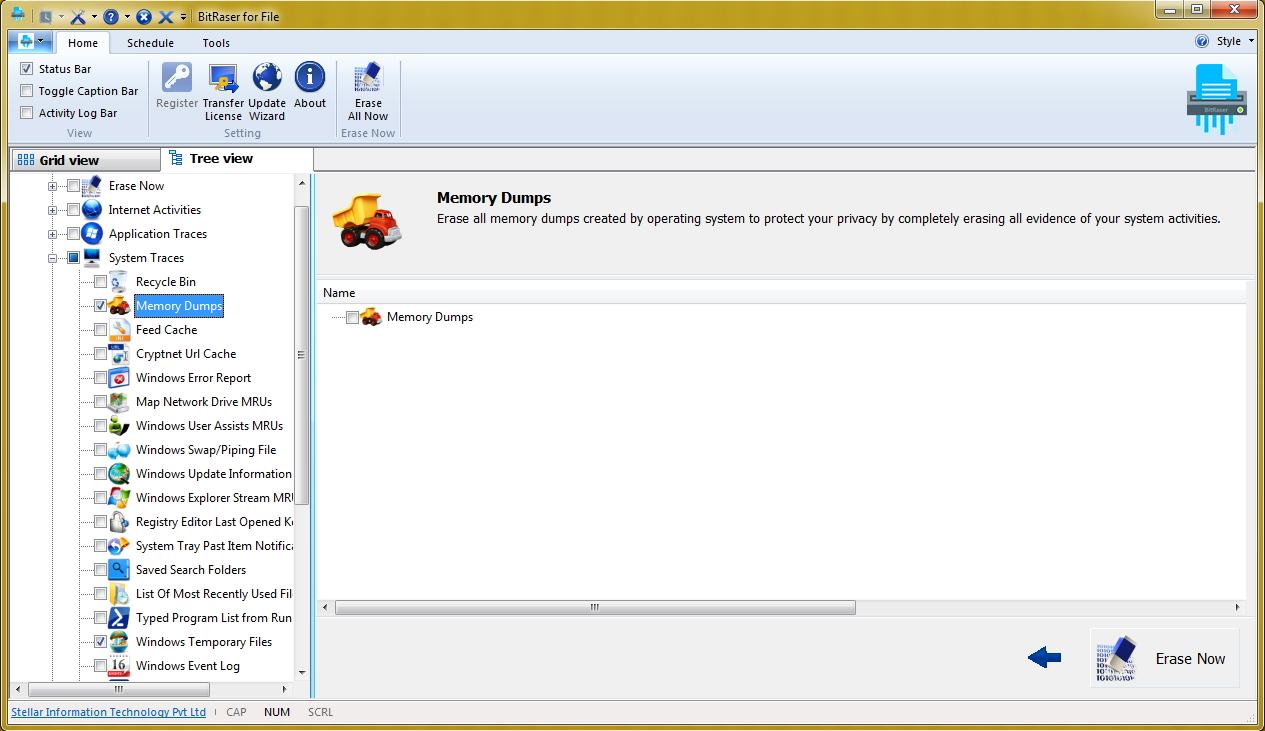 Part 3. What is Memory Dump Files for Windows?

Kernel memory dumps collect the kernel memory alone and are thus far smaller in size than complete memory dumps. Memory allocated to the HAL or Hardware Abstraction Layer and kernel-mode program and drivers is recorded in a Kernel memory dump. This type of memory dump also requires a page file on boot volume for its creation. It is considered to be the most useful dump file.

Small memory dumps occupy the smallest space on the hard drive. This type of dump file can hold as low as 64 KB of data in it. The amount of system memory recorded in a small memory dump is only useful for identifying the reason for the system crash but isn’t enough to debug it. A paging file having a size of at least 2 MB on the boot volume is necessary for creating a small memory dump.

Memory dumps are paging files that contain copies of computer memory at the time of its crashing. It can provide developers the chance to diagnose the issues that caused the computer to crash. There are various types of memory dumps available and each one carries a different amount of system memory in it. Because of their large size, memory dump files can take up a lot of hard drive space. You can delete memory dumps to free up space on your hard disk. This task can be accomplished by using the Data Cleanup Utility. However, if you want to delete it permanently from the system, then using a data erasure tool like Stellar BitRaser for File is your best available option.