Comparison between RAID 10 and RAID 50

Why is this confusion when we are here? Since RAID is preferred to be the widespread data storage module in the information technology field, such chaos for choosing is usual. From RAID 0 to RAID 6, you might be familiar with these versions but never knew which is best for your device? RAID disks offer high performance with the primary task of reducing the data loss risk or redundancy. Among the RAID recipients of the family, RAID 10 and RAID 50 are the higher level RAID implementations widely used for business for flexibility and good performance.

But, which is the best level for your device or business? We have made a simple comparison between RAID 10 and RAID 50 to get to know which is better.

RAID, called Redundant Array of Independent Disks, is a disk of array technology that allows you to store a mass amount of data in multiple disks. Based on your requirement, the RAID level varies; thus, today, in this session, let's discuss RAID 10 and RAID 50 in detail.

RAID 10 is a union of both RAID 1 and RAID 0. In simple terms, RAID 10 = RAID 1 + RAID 0. While RAID 1 uses the concept of “mirroring,” with two disks written with the same information, if anyone disk fails, no information is lost, but it isn’t the same in RAID 0.

Yes, in RAID 0, two or more disks are connected as a single disk called “striping,” leaving data loss if at least one disk fails. Whereas RAID 10 is a hybrid type, it is a bunch of disks mirrored and stripped together to provide functionalities like reliability and fast. Apart, better performance and improved fault tolerance are provided too by RAID 10. 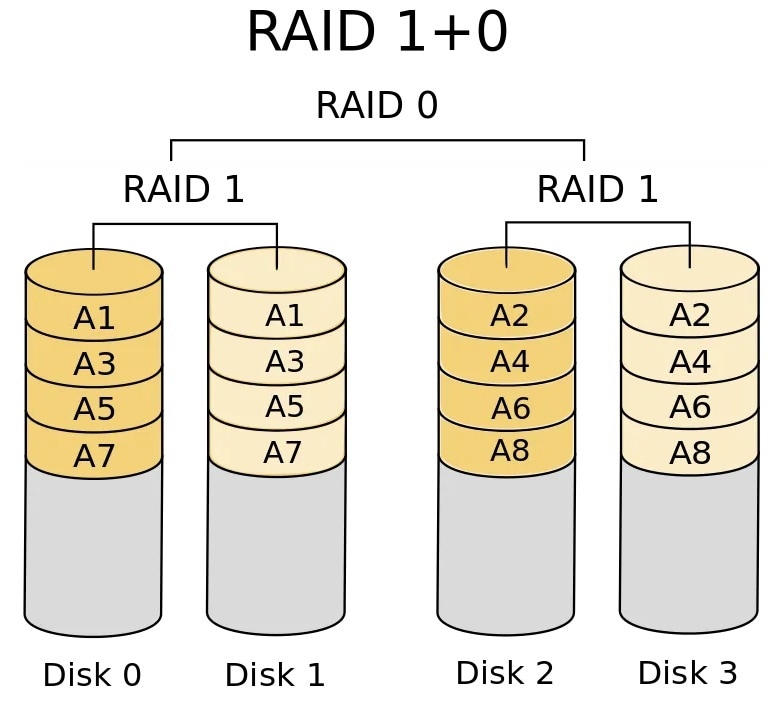 Is your assumption completely reverse? Are you wondering why it is so? Yes, unlike RAID 10, you might have imagined that RAID 50 is a combination of RAID 5 and RAID 0 but, it is pretty different in this case. Without a doubt, RAID 50 is described in such variety too, yet, in a layman's language, 2 RAID 5 level striping is a RAID 50 array. A RAID 50 configuration is treated as a soul disk with 2 RAID 5 arrays in technical terms.

With the requirement of 6 physical disks, you will get four disks wherein each array and parity info gets stored for storage. When it comes to implementation, 2 RAID 5 array configurations for increased data redundancy and performance as RAID 5+0 requires complex RAID controller hardware. Being at the adequate RAID level, you can use 18 disks effectively in RAID 50. 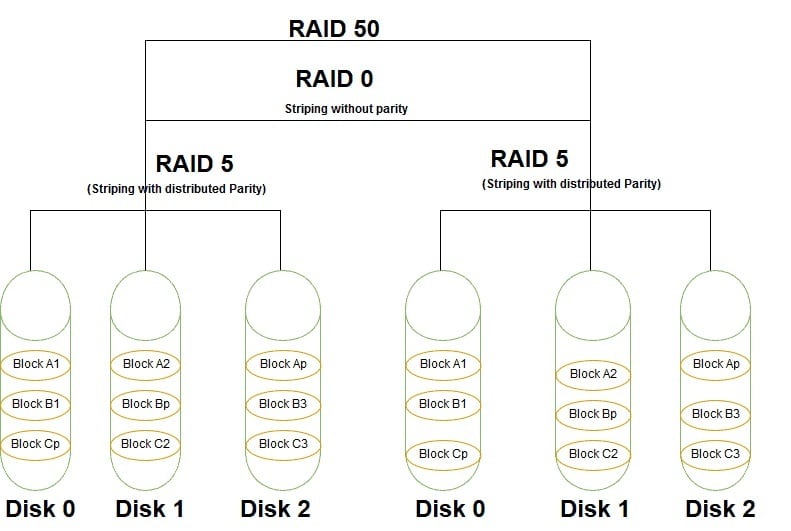 Bonus Tip: How to recover lost data from a hard drive?

And here is a bonus tip on how to recover lost data from a hard drive. Yes, there are various scenarios where you might end up losing data like accidental deletion, system crash, or drive corruption. In such conditions, all you need is a data recovery tool, Wondershare Recoverit , by your side.

Trusted and recognized by top brands like Microsoft, Samsung, Sony, and Dell, Recoverit from Wondershare is a free data recovery tool. With an easy-to-use interface, you can recover all deleted files like emails, documents, photos, and so on from Windows and iOS. Not just lost data recovery, but with Recoverit, you can also perform wonderful activities like data restoration from emptied recycle bin, external devices data recovery, crashed system, and repair the corrupted videos too quickly.

To get back lost data from the hard drive with Recoverit, follow the below step-by-step manual.

After Recoverit download and installation is over, open the application. Select the hard disk to proceed.

An all-around disk scanning will take place by Recoverit, and the time for completion will take a while based on the file size. Upon completion, you will receive a screen with the results.

Once you have found the lost file, with no delay, preview the file, and hit the “Recover” button to get them back.

Our today's article on the comparison between RAID 10 and RAID 50 has now ended! With a short discussion on Recoverit from Wondershare, I believe your search for a suitable tool to retrieve lost data from a hard drive has come to an end too!

Now that you have gone through an interpretation on RAID 10 Vs. RAID 50, I hope you find this guide helpful. RAID, no doubt, is the beautiful disk management tool for your business, whereas finding the best one would have been a problem in the past but not in the present. So, which is better - RAID 10 or RAID 50?

Although both the RAID levels have unique features and advantages based on mirroring and striping, when it comes to the write-read speed, RAID 50 offers high or better performance when compared to RAID 10.

Although RAID 10 is expensive, it is best in case of fault tolerance and performance. RAID 10 is a safe choice with the mirroring technique behind it, as fast as the vast bulk of data can be read-write simultaneously to different disks.

3. Which RAID level is better?

Each RAID version or level is advantageous in certain factors, where when it comes to high data transfer speeds, RAID 60 is the best. In case of redundancy balance and drive usage, RAID 50 and RAID 5 get listed.

4. Which RAID level is well suited for data backup?

For instant backup of files, RAID 1 level is highly recommended but on certain conditions. You have to cut off the disk space to half as even if the drive capacity is 1TB, 2TB will display by the drive.