NAS vs SAN: What's the Difference

Here’s a definitive guide that helps you distinguish between NAS and SAN configurations.

For any network configuration, deploying a reliable storage configuration is crucial. It minimizes data loss and allows for seamless access for multiple users simultaneously. While there are several options available, system administrators find SAN or NAS viable for most situations. 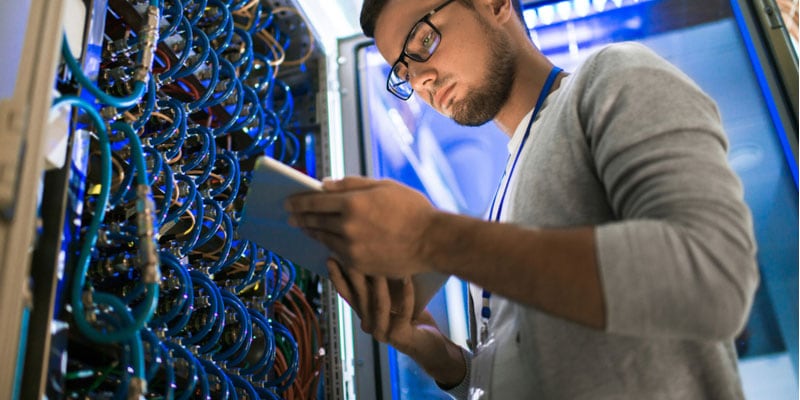 However, applying one presents several benefits and disadvantages. If you're looking to streamline your network data storage, here's a short guide detailing the difference between SAN and NAS. We'll also let you know which applications are best suited for either one.

You might prefer a SAN configuration for your network if you want high-speed connections. It is suitable for fiber channels and often utilizes physical cables. Several LAN gaming modules use SAN to reduce controller latency and make the software more responsive to user input. 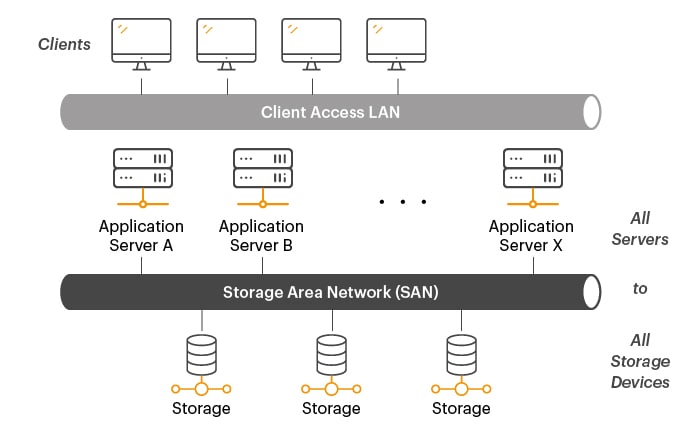 Storage area networks separate the connections between the clients and servers using host bus adapters (HBAs). Those can allow limited access from the users, thus reducing the load on the servers. Since you can also connect server storage independently, each server can contribute towards the storage pool and maximize the available storage.

The Most Common SAN Protocols

The Fiber Channel Protocol (FCP) is SAN's most widely used protocol. It consists of three separate layers of connections:

Benefits and Limitations of SAN

You can scale up your SAN configuration to near-limitless levels.

SAN avoids server overloads and bottlenecks on the network, as no component interferes with the LAN connection of the core servers.

Since all devices share the same local network, it's easier to implement or modify security measures. The administrator can conveniently isolate the drives with sensitive data. Moreover, modifying the firewall for one server does the same for the rest as well.

You can only maintain this storage network by shutting down the servers. Thus, it's not ideal for services that rely on continuous or emergency services.

The excessive connections and control make SAN configuration quite expensive. It can be a dealbreaker for SMBs with limited budgets to scale their network storage.

Compared to SAN, NAS slows down the connection speed between devices. However, you trade it for more reliability and increased security. In a NAS configuration, you can access the storage separate from the servers using a switch. All the drives are created as a redundant array of independent disks (RAID), with each disk capable of backing up the data should the previous one fail. 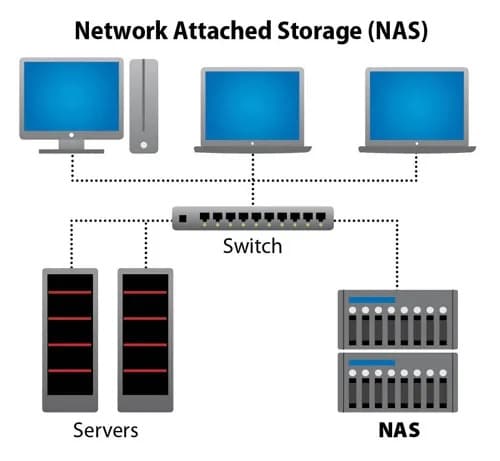 The Most Common NAS Protocols

For the users, the NAS is displayed as one or more drives. They can connect to the storage using Ethernet. A NAS configuration supports almost any protocol for connection, including TCP/IP, NFS, and HTTP. You can apply them to regular LAN devices through Wi-Fi or similar technology. It doesn't require you to be an IT expert, either. Most of the hardware comes with a simple instruction manual, and you can create a robust system within a couple of hours.

Benefits and Limitations of NAS

The architecture of NAS makes it easier for the end-user devices to identify the drives. You don't need additional software or protocols to modify the systems.

NAS devices are straightforward to secure as they are separate from the primary servers.

The NAS configuration is relatively inexpensive to implement when compared to SAN. That makes it ideal for SMBs that usually have a limited budget.

NAS offers reliable maintenance capabilities because you can remove and repair individual drives without shutting down the servers or denying service to the end users.

NAS usually has a slower connection speed than SAN. So, you may require faster LAN capabilities to balance the input or file transfer lag.

Removing connection overloads or bottlenecks can be challenging since there is no high-density pathway to free the network.

There are specific criteria that can help you determine whether you desire SAN or NAS for your network. Let's compare those head-to-head for both configurations.

When it comes to NAS, you can obtain a more straightforward setup by utilizing run-of-the-mill hardware. You don't need to create specialized software or retrofit devices. Administrators can avail most of the tools from regular sources and create the entire network storage without any formal training.

In contrast, SAN requires you to create multiple layers of infrastructure that require precise specifications to remain compatible. While it offers faster communication, flash-based devices are closing the gap for SAN vs NAS speeds.

NAS offers file-and-folder data access that is more straightforward for data processing. The users read the drives as if they were connected externally. The configuration operates with a global namespace, so the experience of using the data is the same regardless of the user's device.

On the other hand, SAN processes the data in a block format, which requires a few mandates for all connected devices. There is also the possibility of the system restricting access to devices other than the ones authorized for use. It may occur when an employee tries to find a project with their smartphone instead of their workstation.

When it comes to SAN vs NAS IP, the latter supports broader and more accessible network protocols that you can conveniently utilize from the internet. Most of them like TCP/IP, HTTP, and NFS are open-source, so administrators don't have to worry about licensing fees.

SANs typically use more specialized protocols like SCSI and FCoE, which provide higher speeds but are more complex and expensive to implement. Although, more SAN setups today are moving towards IP instead of FCoE to save costs.

SAN is optimized for high speed of file and input transfer, which allows it a far better response and traffic management than NAS. That's why you'll find most dedicated servers for video games use SAN. With an excellent SAN configuration, you can achieve speeds anywhere from 2 GB/s to 128 GB/s.

Regarding SAN vs NAS speed, the latter can allow you up to 20 MB/s with eSATA drives. However, you can quickly scale that past 1 GB/s using faster LAN devices and SSDs. Still, there can be issues in the form of bottlenecks, which the administrators must account for ahead of time.

Both SAN and NAS networks are highly scalable. You can even upgrade NAS configurations without shutting down the servers. That's why it's more desirable for emergency and government services. Nevertheless, scalability can be an issue for low-end NAS hardware, which is why most corporations prefer building their network with SAN.

When it comes to installing and running costs, NAS is the clear winner. You can configure it precisely to your needs for lower investment and save those funds for future upgrades. But, past a certain point, you may need to swap out the entire system for a fresh one.

That's not an issue with SANs. Once you conclude the initial installation, the system can scale to near-unlimited storage. Yet, those initial costs can be a problem for enterprises with limited starting capital.

For SAN, you can conduct management cycles faster due to a centralized structure, but it requires that you shut down the servers. On the flip side, NAS maintenance can be done with active storage servers, but it usually takes longer to detect and rectify any faults.

Given the various differences between NAS and SAN, they are suitable for different applications. You can find out more about them in the details below.

NAS is best used for applications that have limited budgets and can’t afford to remain offline. You can find such configurations in emergency services, government offices, domestic systems, and big data applications for SMBs.

Since SAN is concerned with speed without worrying about costs, it’s mostly used by big corporations. It’s the go to for e-commerce sites and video game developers to provide a stable platform during high-density sessions.

Part 6. NAS or SAN: Which One Should You Choose?

Given all the above information, predicting which configuration suits you best in the long term can be challenging. Here's a simple checklist to help you decide whether you desire SAN or NAS.

The following vendors are the best to approach for a NAS configuration.

SAN equipment is usually costly. Thus, it's best to get it right the first time and avail of it from the following vendors.

Unified SAN/NAS combines file and block storage into a single system. Those unified systems support up to four protocols simultaneously. The storage controllers allocate physical storage for NAS vs SAN processing. Thus, you get the benefits of both worlds while keeping the hardware costs relatively low.

Such configurations are prominent for mid-range enterprises that need both SAN and NAS but lack data center space and specialized admins for separate systems.

And that concludes our guide to the difference between SAN and NAS systems. We hope this guide grants you enough information to make the appropriate decision for your business. Remember, no matter how robust you make the system, there's always a chance that you might need to recover data from the NAS drives. For such scenarios, check out Wondershare Recoverit NAS Recovery from the official page.

How To Recover Data From NAS Hard Drive

This article listed the most comprehensive solutions to recover data from a NAS hard drive.

With the listed methods, you can easily recover data from the Seagate Central NAS drive.