Back in 2015, Microsoft released Windows 10 through a free-update program for owners of computers with licensed copies of Windows 7, 8, and 8.1. This strategy was used as an attempt to force the rapid adoption of the new OS. While the results were pretty positive, not every user promptly jumped in the Windows 10 bandwagon. Therefore, the giant of computers was forced to see 2009 Windows 7 keeping the lead for a long time. However, we are in 2019 now and things have turned positive for the latest version of Windows software.

According to a report from Net Applications, the latest version of Windows has passed 50% in market share. That's the second milestone in 2019 since the company has passed Windows 7 back in January this year. The new achievement means that every other desktop computer is now running Microsoft's latest and greatest operating system. Windows 10 road to becoming the most popular Windows software took longer than Microsoft expected, but of course, the company is finally satisfied with the latest achievements of the operating system.

The OS adoption started very strong in the first months but naturally slowed after the initial buzz. The US giant was aiming for 1 billion devices running Windows 10 in two to three years, however, it toned down its expectations after noticing that this accomplishment was quite impossible. 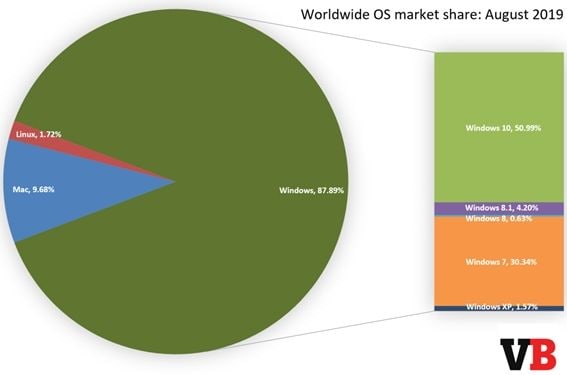 Windows 8 wasn't the most popular of Microsofts Operating Systems, while it shares some similarities with Windows 10 in terms of UI, the Operating System was a target of huge backlash due to some controversial changes in the Interface. This particular version of Windows stayed flat in the margin at 0.63%, The improved version, Windows 8.1 lost 0.91 points to 4.20%. These two versions when combined have a 4.83% slice of the market. For a quick comparison, the Windows 8 duo reached its peak at 16,45% back in 2015.

Windows 7 was the most popular version until this year, according to the August results It dropped 1.49 percentage points, falling from 31.83% to 30.34%. Windows 7 was the company's most successful attempt to overcome Windows XP's popularity after Windows Vistas' failure. The OS surpassed the 2000 Windows XP way back in September 2012, it became World's most used operating system, passing the 60% market-share spot, in June 2015. The successful version of Windows is finally giving its last steps with Microsoft set to end its support on January 14, 2020. Therefore, hundreds of millions of users have just four months to leave Windows 7 for a more modern version (Preferably Windows 10). Microsoft will still deliver paid security updates; however, only corporate clients will be able to afford it.

At the bottom of the Windows margin, here are we again talking about Windows Vista. This is definitively one of the most controversial versions of the operating system. While it failed to overcome Windows XP, it brought some big changes to the interface that were later upgraded in Windows 7. Windows Vista falls below 1% market share at the start of 2017, the month of its 10th anniversary. Now, according to the research data, this version is flat at 0.15%. Interesting enough, Vista is still behind Windows XP which has 1.57% of the margin.

The research also revealed the results achieved by most of the PC operating systems that are available in the market. According to it, Windows 10 slipped 0.56 percentage points to 87.89% in August. Interestingly enough, Apple's macOS gained 0.70 points to 9.68%, while the popular free and open-source OS, Linux slipped 0.38 points to 1.72%. According to the research, the only OS to achieve positive results is macOS which is only present in Apple computers, unlike Windows and Linux that can be easily installed in most PCs from different brands.

The research captured by Net Applications is based on the data captured from 160 million unique visitors each month by monitoring some 40,000 websites for its clients. The results are strongly aimed at determining the user market share as a whole.

Microsoft surely knows what is doing when started to prompt users with the end of support of Windows 7. The company isn't hoping that users jump for the unpopular Windows 8/8.1, instead of its easy to assume that they'll upgrade the OS straight to Windows 10. The company used the same strategy when it decided to pull off the plug of Windows XP back in the days. Interesting enough, things are slightly different this time around. According to a report, users of Windows 7 were more reluctant to give up the OS than they had Windows XP.

Microsoft could definitively accelerate Windows 7 Exodus directly to Windows 10 if it decides to put some money where its mouth is. "If you continue to use Windows 7 after support has ended, your PC will still work, but it will become more vulnerable to security risks and viruses," Furthermore, the company could allow the last minute of the year-long free upgrade offer for Windows 7 Home and Windows 7 Professional systems. Such a minute would reduce the number of PCs that will be left in the hand of exploits. Unfortunately, this move is unlikely to happen since it could directly affect the sales of Windows 10 Home and Windows 10 Pro licenses. However, we still believe that this movement wouldn't be more surprising than it was back in 2015.

The 12-month average increase of Windows 10 during the free offer was 1.7 percentage points, according to Net Applications. If Microsoft repeats this feat by offering free upgrades immediately after Windows 7 "official death" we could see a similar effect to the original. Based on this speculation, we would see the January 2020 user share of Windows 10 reaching its peak at 68%. Windows 7 would be approximately four points lower, or around 26%, when it falls off the support list.

Windows 10 KB4512941 update is giving headaches to some users

Unfortunately, the news isn't only positive for Windows 10 users, according to a report a recently released update is causing problems to some users of the latest Operating system. Microsoft has just released the Windows 10 KB4512941 update to every user who hits the 'Check for updates' button in Windows Update and click on the new 'Download and install now' option. The update in question comes to address an issue with the broken Windows Sandbox, the black screen issue hitting Remote Desktop connections, and several other bugs. However, while this update fixes the referred issues it is also causing problems to several users who have installed the build.

According to various reports on Mirosofts Forums and Feeback Hub, several devices running the latest update may startup with a high CPU usage problem. Thus decreasing the overall performance of the systems, making the whole experience problematic to not say terrible. The culprit for this issue is no one else than Cortana.

Let's clarify, the Cortana (SearchUI.exe) process is generating a high CPU usage for some users and the process has recorded a bump of around 30-40 percent in Task Manager. Worth noting that the usage strongly depends on the number of cores a processor has. There is some issue with the virtual assistant that came along this update.

According to a user "After installing KB4512941 (OS Build 18362.329) the pop-out window with the search results stays blank, SearchUI.exe is constantly using CPU and ~200MB of memory".

Another user also came to FeedBack Hub to express its dissatisfaction with the latest build of Windows 10: "Cortana is consistently running above 35% CPU usage and 150 MB memory as reported by Task Manager, for at least one day now. Despite this fact, using the Search button next to the Start Menu pops up a dialog that will not display any items upon entering any search query, even after waiting for several minutes," another user complained about the CPU usage on Feedback Hub.

Testers reported the problem before the public release

Things become worse when we know that Microsoft tested KB4512941 build with several Windows Insiders enrolled into the Release Preview Ring. The build was consistently tested for more than a week before the company decided that it was ready for the general public.

According to users on Feedback Hub, there were several reports of high CPU submitted multiple times by testers earlier this week. Unfortunately, these reports appear to have been ignored because they didn't receive the necessary amount of votes to appear.

Since there's still no schedule for a new update that addresses the issue, and not everyone is willing to roll back to the previous version of the OS due to the bugs that were fixed in the new one, some users already developed a workaround to the issue with Cortana's process.

According to some users, deleting a Registry key, which prevents the Start menu search from sending local search queries to Bing, will resolve the CPU usage problem.

We do believe that this process will definitively break something in the Bing-related functions, however it's a price that some users are happy to pay to make this update more stable. Of course, not all users will feel comfortable in messing with Windows Registry. For that reason, if you're not familiar enough with the advanced depths of Windows OS, then the best choice to make is to uninstall this update and rollback to a previous one. Despite the aforementioned issues that were solved with the KB4512941 update, you'll feel an improved and more consistent performance in older releases. You just need to follow a few steps:

Microsoft responds to the issue with security update KB4515384 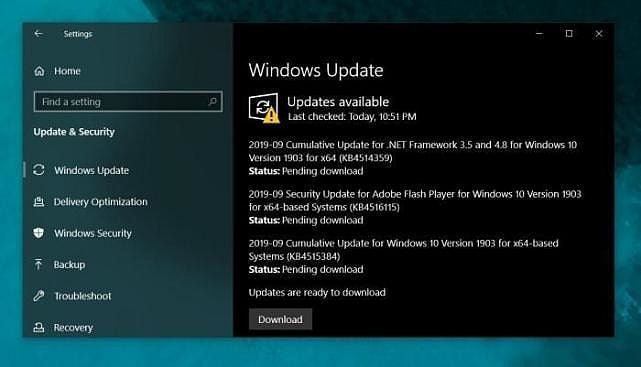 Microsoft promised that a fix for the high CPU usage would be provided by mid-September, but the company delivered it a little earlier, as part of its huge September Patch Tuesday update. The company is rolling out security updates KB4515384 to address this issue. By the way, high CPU usage may be caused by Ntoskml.exe.

Still, a small number of Windows Insiders had reported the same issue through the Feedback Hub in preview testing of the buggy update, which Microsoft missed despite recent efforts to improve its detection of narrowly reported issues. The Patch released Tuesday address two zero-day elevations of privilege flaws that were under attack already. The update included 80 security fixes.

In addition to the above fixes, Microsoft patched two remote code execution bugs in the Remote Desktop Protocol. However, these issues arent so dangerous as the recent BlueKeep and DejaBlue vulnerabilities, which could be used to create a wormable exploit to automatically infect vulnerable machines on the same network.

Of course, Microsoft will need to keep improving its software support and beta testing in the coming months, after all, Windows 10 is now present in more than half of the World's PCs. So any bug popping in the upcoming public updates will be noticed and affect a large number of users.