Can't you install Windows because your disk is of the GPT Partition Style? Don't worry, there are various solutions to solve this problem and also, you can recover your information if you lost it through a professional and reliable software.

The technology of MBR partitions has become practically obsolete, although it is still used, mainly on disks that were produced several years ago. These disks can work like slaves without problems, but when it comes to working as masters (when installing Windows operating system) you may see the message "Windows Cannot Be Installed to This Disk The Selected Disk Is of the GPT Partition Style." Here you will review what triggers this restriction by Windows, as well as the solutions and a professional alternative to rescue your information if you should require it.

Solved: The Selected Disk is of the GPT Partition Style

Q: I have reformatted my disk and I did it without problems, however, when I try to install Windows, I got a message like this: "Windows Cannot Be Installed to This Disk The Selected Disk Is of the GPT Partition Style," could you tell me what do I have to prevent this restriction from appearing again?

Let's first talk about the BIOS (Basic Input Output System) and UEFI (Unified Extensible Firmware Interface) of computers, which are a standard that defines the firmware interface of PCs and laptops, thanks to them, the computer can turn on, test the hardware and load a bootloader or operating system so that it interacts with all components.

Both of these boot modes can be found on the disks, however, UEFI is becoming more common as it is the one that has been replacing BIOS. Even so, UEFI can be configured to start in BIOS mode (this adaptation is called "Legacy"), because there are still users who work with old disks and who do not have the technology to work with partitions GPT.

So, since the topic of boot modes was touched on, let's now talk about the GPT and MBR partition style. The first works with UEFI boot mode, while the second must make use of BIOS. So, you should make sure you know which partition your disk can work with, as otherwise it will be incompatible and the operating system will not be installed.

About GPT and MBR

MBR (Master Boot Record) partitions have been used since 1983. They are characterized by storing the logical partitions of the storage unit in a single place. Broadly speaking, it makes information recovery very complex if it becomes affected by corrupt files or a virus. Another relevant aspect is the storage unit capacity, MBR partitions allow up to 32 bits for each sector of the storage unit, which limits the maximum size of the units to 2 TB. finally, if your hard drive uses MBR it can have a maximum of four partitions.

GPT (GUI Partition Table) partitions began to be designed in the 90s. However, it was not until the end of the previous decade that they became popular on most computers. Unlike MBR, GPT technology distributes copies of data across all partitions, so retrieving information can be easy if it is replicated to other partitions. Another advantage is that it allows up to 64 bits per sector, which means that units with 9.4 ZB are available, an amount that includes billions of Gigabytes; finally, it can also be highlighted that if you want to use GPT on your hard drive, you can have up to 128 partitions.

GPT is a much newer and more compatible technology, as well as providing greater security and storage capacity to the units. So, if you have an updated disk and you have a UEFI boot mode on your motherboard, you will not be able to choose MBR partition to install your operating system, on the contrary, it will give you the message "Windows Cannot Be Installed to This Disk The Selected Disk Is of the GPT Partition Style " due to the lack of compatibility that exists. This message may also appear if your computer boots with Legacy BIOS and you configured GPT partition to install Windows.

So, Windows can be installed in a GPT partition if the system boots with UEFI mode and, on the other hand, an MBR partition cannot boot with UEFI, but only with BIOS or Legacy BIOS (an adaptation of UEFI to boot in BIOS mode).

There are three methods to convert partitions from MBR to UEFI and also to change boot mode between BIOS and UEFI, which will fix the problem of Windows installation. Both alternatives can be seen in the next part.

1 Convert MBR to GPT by Reformatting the Drive:

If you reformat your drive, you can convert MBR partitions to GPT. To do it, you just have to follow these simple steps:

Right-click on the Windows icon and select "Disk Management. 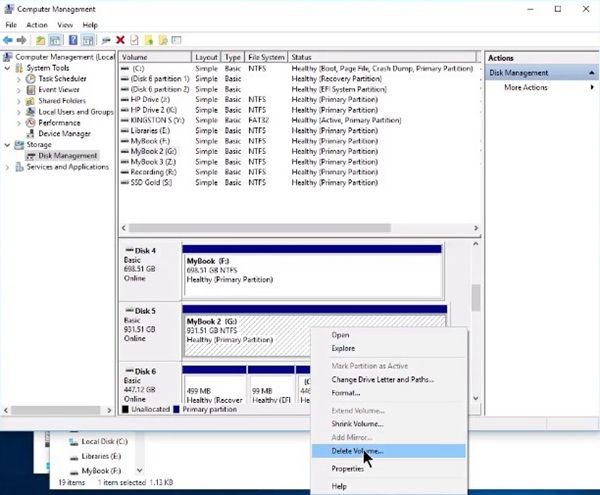 Look for the disk you want to change partition style, then right-click the corresponding white box and select "Delete Volume…" from the list. You should back up your information before doing this step because it will be completely deleted after this task. 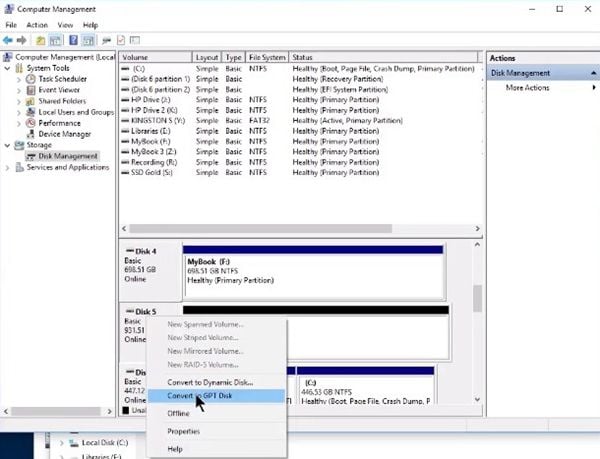 After the volume is deleted, it will appear as "unallocated" with a black bar at the top of the blank square. Now right-click the disk name/number you want to change partition and select "Convert in GPT Disk." Now your disk will get GPT partition style. 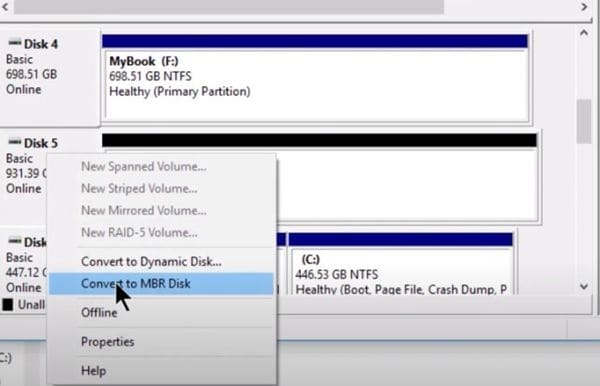 If you want to confirm your disk has switched to GPT, right-click it again and you will see "Convert to MBR Disk," DO NOT select this or it will switch to MBR again. 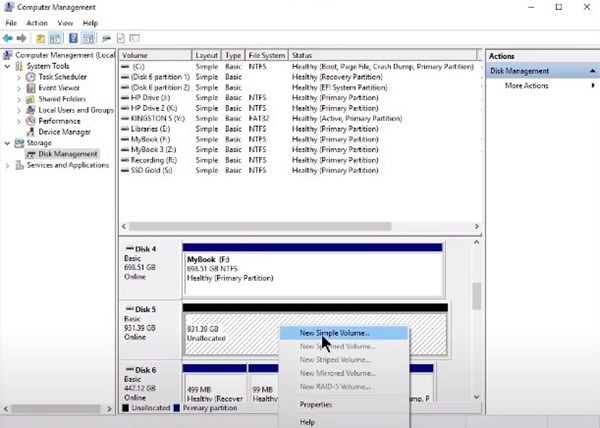 Right-click the corresponding blank square of your disk and click "New Simple Volume…" then you have to specify volume size and assign a drive letter, then your disk will be formatted and this process may take several minutes. After this, your disk will be ready to be used again.

2 Convert GPT to MBR with Diskpart:

You can convert GPT to MBR with diskpart command via Command Prompt.

Click on the Windows icon and then type "cmd", right-click on "Command Prompt" and select "Run as administrator".

Step 2: Convert GPT to MBR with the commands 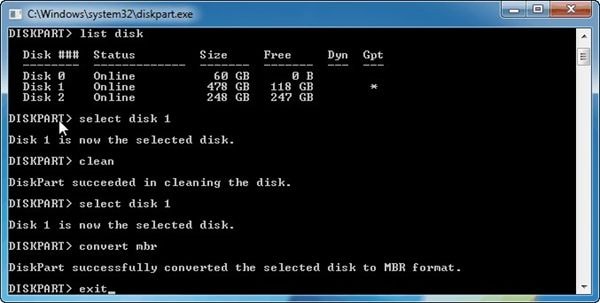 Type the following codes in order (don't forget to press "Enter" after typing each one).

Remember UEFI boot mode is the compatible one with GPT, if Legacy BIOS is the selected boot mode, you can change it with this simple process: 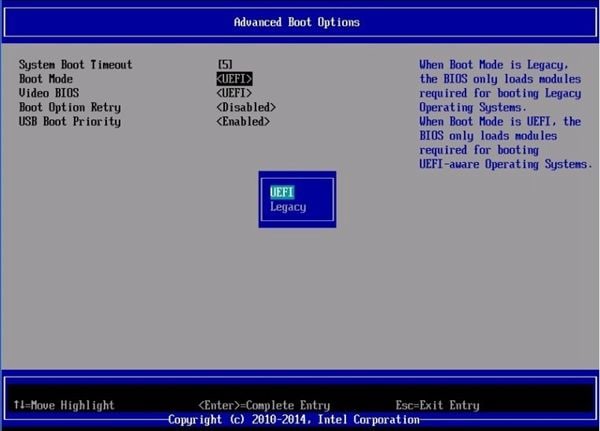 The previous method is foolproof but losing the data can be unfeasible in some cases. On the other hand, UEFI offers the option to exchange the boot software between Legacy (BIOS) and UEFI, in this way you could force the compatibility with the operating system.

During the startup of your computer, press the F1 / F2 / F8 / F10 key (the key will depend on the motherboard manufacturer) Now you must go to the "Boot" section and set the parameter of "Legacy Boot Option Priority" to "UEFI."

As you may have noticed, changing your disk from MBR to GPT causes your information to be automatically deleted, so it is highly recommended to make a backup to avoid losing it. If for some reason you forgot to back up your data or there was an error in this procedure, you may think that there is no remedy, but there is software that will help you recover your files even if you reformatted your disk. This application is Wondershare Recoverit, which is professional, safe, and effective. You can download it from the following download button.

Step 1: Choose a drive to scan

Once you've installed and opened the software, select the drive where the deleted data was located

Step 2: Select the files to recover/restore

Now all you have to do is select the folder or folders you want to recover/restore and click on "Recover".

More Related: How To Install Windows 10/11 on GPT Partition

GPT has become the most effective and comfortable way to use your disk partitions, thanks to the advantages and benefits it has offered, which is why it has become the successor and improved version of MBR. As you may have noticed, if you convert your MBR disk to GPT your information will be deleted. However, thanks to Recoverit, this process is no longer worrisome, since, with a few simple clicks, you can recover your information even after reformatting your disk.

How do I change GPT to primary?

The GPT layout only uses primary partitions. The concept of extended and primary partition is only decisive when working with MBR disks due to their limitations. However, if you want to switch from GPT to MBR, you can do it during Windows installation with the "diskpart" tool via the portable version of command prompt.

Can Windows 10 install on MBR partition?

Yes. You can install any version of Windows on an MBR disk. However, you cannot boot or install Windows on MBR partitions if your computer's firmware is EFI. It is for this reason that it is recommended to check what type of firmware you have before starting to install Windows.

How do I change GPT to NTFS?

GPT is a management layout for the partition table, while NTFS is a file system format. Both concepts are different and you can use the NTFS file system from a GPT device. If your device is not NTFS but you want it to be, you can change the file system through Disk Management but don’t forget to back-up the information before.

How do I change my BIOS to UEFI mode?

Changing your BIOS compatibility settings to UEFI is pretty straightforward. You just have to access the BIOS setup screen, pressing DEL during boot (The key may vary depending on the manufacturer). Once there, head over to the boot mode section and select the UEFI support option. Don’t forget to save changes before restarting.

Does Windows 10 use MBR or GPT?

Windows 10 can use both, but the main criteria you should follow when deciding which layout to use for the partition table is the compatibility with your hardware. Remember that Windows cannot be installed in MBR partitions in EFI systems and that if you want to use disks with greater capacity than 2TB to install Windows you must use the GPT layout.