How to Repair Damaged JPEG/JPG files from Memory Card?

JPEG/JPG files are image files that contain the syllables as an extension. Files with such an extension are normally small in size and many such files can be easily stored or saved on storage media. If the storage media is damaged, the image files may get corrupted. Storage media may include spaces such as those of a Computer Hard Disk, Flash Memory Card, or Memory Sticks. Depending on the level of damage to the storage media, the images files previously saved therein may seem completely lost. This, in essence, may make one ignore the urge to save or recover the files.

Now, for those wishing to get back the files, especially those having been on a memory card and due to damage may get corrupted, there is a way one can repair damaged jpg files from such unforeseen incidents. The process is pretty simple and requires on to make use of a tool that can do this task effectively. This is a repair tool. One of the best repair tools to use to get back the corrupted files will be theWondershare Repairit.

Part 1. How to repair damaged JPEG/JPG files from memory card

The process might be a bit lengthy, all the same, it is better to be safe than sorry, in the eventuality you end up with errors cause of trying to use shortcuts to achieve repairing the damaged files. For the most part, the process is fun and the user interface of the software used will leave you stupefied, especially due to its clarity, execution speed, and ease of use.

Note, for the secondary storage media such as memory cards, one may first need to recover the media data on the device, that is the photos. Then proceed to repair damaged jpeg files. Another recommended software is Recoverit Data Recovery, that will effectively recover the lost or damaged photos, for repair. Also, one should first start by getting the tools mentioned above and install them to start using the software. 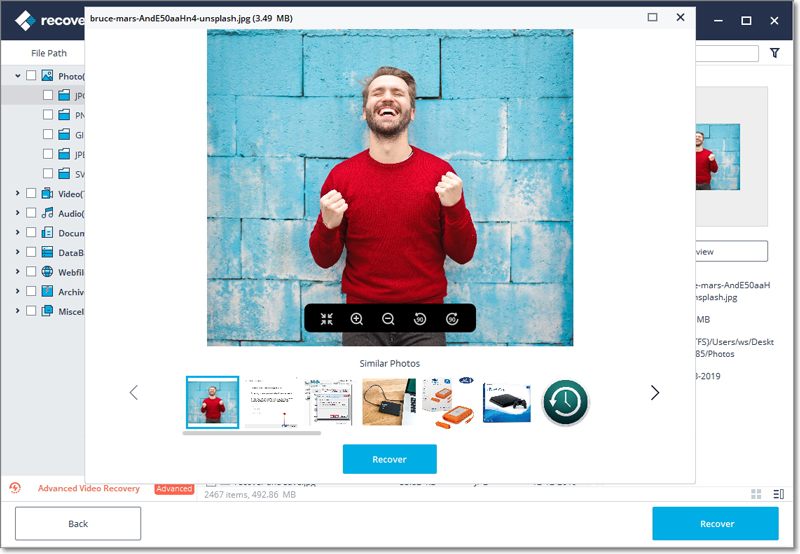 Now that you know how to recover photos, let us also learn how to photo repair using this all-round software. The first part is over, now to the final and last part of the recovery and repair of the damaged image files.

Here, one will need to use the Wondershare Repairit to repair the recovered files, in case they are or were damaged.

Using Wondershare Repairit, you will at first start by adding the corrupted image files. This is after downloading and installing the software. It is free to download from the software's Official Website.

Step 2 Choose Files to be Repaired

Depending on the number of files, or in case you are inserting a folder, a list may be created by the software. It is better to selectively choose the files from the list by either checking or leaving the checkbox blank.

Finally, once the process is over, the pop-up notification, displaying "Repair Complete" will come up on the screen which will signify that the operation is done. At last, click "Ok" to finish.

The reasons behind the damage of JPG files from a memory card may be diverse. However, if we introspectively look at the matter, it clearly shows that the damage must have first ensued from the storage media, thus corrupting the files. With the above in mind, here are some reasons why the JPG files may have been corrupted by the damaged memory card. Noteworthy is that the damage to the storage media, which eventually corrupts the image files may be both logical or physical.

These are damage reasons due to the rationality with which the memory cards are handled. One thus needs to be sensible enough to overcome such issues.

Part 3. How to protect the image from the memory card

Here are some steps that you can take for image protection in memory card:

Memory card, also known as the SD Cards come in many different forms, all performing the same function. The only difference is usually in the formats used for saving. All the same, data saved on the memory card is subject to damage and corruption. The reasons for these have been discussed. All in all, to repair damaged jpg files, follow the laid-out steps above and you will eventually get back the corrupted image files from a damaged memory card.

What Is AIFF and How to Open/Recover It?

What Is AA3 File and How to Open/Recover It