How to Screenshot on Windows and Mac

If you are wondering how to take a screenshot on a Mac, then you can learn the various ways to do it. Get to know all about screenshots and its importance here.

Normally, the people who switch from Windows to Mac are the ones who do this research. You will find unlimited queries stating, "how do I take a screenshot on my Mac." In Windows, the screenshot feature is used with the Print Screen key, but Mac PCs don't have that key. So, if you are one of them, then don't panic.

In this article, you will get to learn everything about the screenshot feature in Mac OS. Once you are done reading this article, you will know how to do a screenshot on Windows and Mac. As there are several methods to do this, you can choose any of the easy options for you. Whether you have MacBook Air, Pro, or iMac, you'll be able to learn all the screen capturing methods here.

Part 1 What Is a Screenshot?

You might have heard the term many times, but can you describe it properly? Well, we can do it for you. The term screenshot is used to describe the action of capturing a static image file of your desktop or computer screen or a particular area of the screen.

Thus, the screenshot feature allows the users to take a picture of whatever is on their device's display screen. This feature is so useful that every electronic device, whether it is mobile phones, tablets, or computers, they have it.

Before you learn how to do a screenshot on a Mac or Windows, you must know about its uses. When you can't explain something in words, at that time, screenshots come in handy. Few examples where a screenshot can be of real help are given below.

Saved screenshots lost? Go to the page for solutions - How to recover pictures permanently.
- 2 minutes to read it.

Part 2 How to Screenshot on Windows 10

1. How to Take a Screenshot on a PC Using Snipping Tool

If you don't want any trouble screenshot Windows 10, then the snipping tool is perfect for you. This tool was released with Windows Vista and available for all other versions too. It can take screenshots in various sizes and formats. Along with the capturing tool, the Snipping tool also has a basic image editing tool with an eraser, highlighter, and colored pens.

Windows users can use the Snipping tool to: 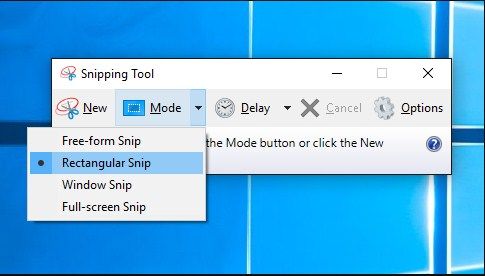 To take a free-form or rectangular snip, you will need to select a particular area with the mouse.

If you are good at remembering shortcuts, then the Snipping tool can also be activated using the Keyboard shortcut keys. Here are the shortcuts that you can use to capture the screen with keys.

So, that's how you can use the snipping tool to take screenshots on any Windows PC.

2. How to Screenshot Using Print Screen on Windows 10

The steps you need to follow to take a screenshot in Windows 10 are as follows:

The mishandling of taking a screenshot might cause photo corruption. How can you restore corrupted photos?
- 2 minutes to read it.

3. How to Save Screenshots on Windows 10

To save the screenshot on Windows 10, you don't need to do much. As you press the Windows Key and PrntScrn keys together, the screen dims for a second, and the screenshots automatically get saved to the default folder.

As the default format for Windows 10 screenshot is PNG, you can use another method to save the screenshot in another format.

But, in some systems, the PrntScrn key has other functions too. Then in such conditions, you'll need to press the Fn + Windows key + PrntScrn simultaneously to capture a screenshot. You can find the folder under the User Profile's Pictures option.

4. How to Edit Screenshots on Windows 10

Hopefully, now you know how to screenshot on Windows 10/8/7. Along with this, the method of editing screenshots in the Windows system is also straightforward. Usually, the tools which are used to take screenshot have their editing function.

But the default PrntScrn method doesn't have an editing option. Therefore, to edit the screenshots, you have to use a slightly different method.

But with Windows 10, a tool named Microsoft Snip allows the users to draw some lines, add audio files, and add animated things in the screenshot before sharing. In the older version of Windows, the users can also use the Snipping tool for editing.

Part 3 How to Screenshot on Mac

Without the PrntScrn, many users who switch from Windows OS to Mac get lost. But don't worry; Mac OS is not that hard to operate as you think it is. So, here's how to take a screenshot on Mac easily. Luckily, you get more customizable options for Mac than Windows OS.

To capture a particular screen area, you can use the Mac screenshot shortcut. As there are various options available, you have to follow slightly different steps to take screenshots of a particular area.

1 If you want to use screen capture on Mac for a window, you should press Command + Shift + 4 keys at once. As the crosshairs appear on the screen, press the Space key, position the cursor over the window, and click on the mouse or the trackpad. Remember to hold the space bar while dragging.
2 As you click, the camera icon will appear, and the window will turn grey. If multiple windows are open, choose the window you want to capture and click on the mouse to take the screenshot. The image will appear on the desktop automatically.

To take a screenshot on MacBook, you only need to press the Command + Shift + 3, and you will hear a shutter sound of the camera. By default, the screenshot will be displayed on the desktop.

1 To screenshot MacBook pro or others, you should press Command + Shift + 4 keys simultaneously. With this shortcut, you'll be able to capture a part of the screen.
2 As you press the keys, a cross will appear on the screen with some numbers. You can drag the cross across the area which you want to capture. Press the Space bar while dragging to move the entire selection. Then release the mouse or trackpad button, and you'll find the screenshot on your desktop.

Any photo corruption issue can be solved. Here are the solutions - How to Repair JPEG Files.
- 2 minutes to read it.

2. Do a Screenshot via macOS Mojave

But to get to the controls, you'll need to click on the Command + Shift + 5 on the keyboard, and the screen capture controls will appear on the screen. But you can also use keyboard shortcuts.

Screenshot the whole screen on Mac:

If you want to know how to screenshot on macOS Mojave, then follow these steps: To capture the screen, press the Command + Shift + 3, and the screenshot of the entire screen will be automatically saved on the desktop.

To capture the screen of a particular window, you will have to follow the below steps:

Screenshot a portion on Mac:

To take the screenshot of a particular portion, you need to follow these steps:

Once you have learned how to take a screenshot on a MacBook Pro, you will need to know how to save screenshots. So, here you can find out where the screenshots go after you capture them.

It is vital that you also know where do screenshots go on Mac. By default, the screenshots are saved on the desktop. But you can also use other tools to customize the location where the screenshots might be saved.

As you now know how to screenshot on Mac Air/Pro/Mini or any other Mac version, you will be glad to know that you can also edit them. Furthermore, it is easy to straightforward edit the screenshots. All you need to do is following the steps below:

4. How to Save Screenshots on Mac

In Mojave, you can use apps like Grab to save your screenshots elsewhere. The screenshot images will be saved in the Documents folder with Untitled Name.

As you click on the Command + Shift + 5 keys, open the Save to section and find the location where the images are saved. You can easily customize the location in any of the Mac versions. 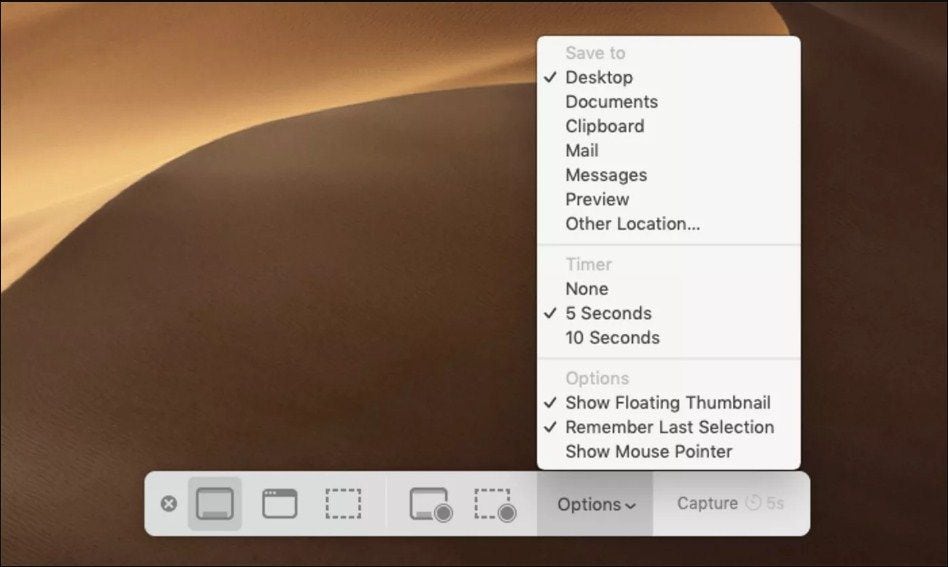 Part 4 How to Recover Lost Screenshots

Sometimes, even though the screenshots are saved, there is a possibility that they still get lost. But luckily, you still have a reliable method to get them back if you save the screenshots on your PC, hard drive, SD card, and so on. The method is taking advantage of Recoverit Photo Recovery.

Once you know how to take a screenshot in Mac, you can take as many screenshots as you want. But unfortunately, sometimes, we can also go through the accidental deletion, formatting, and system crash that results in data loss. But luckily, we can recover the photos easily with Recoverit Photo Recovery.

This tool is specially designed to take care of the media files that you accidentally lose. Whether it is photos, videos, or audio files, you can easily recover the screenshots with Recoverit.

How to Recover Screenshots on Windows and Mac

People usually swipe the saved screenshot and fall into despair. You can download Recoverit Photo Recovery to get the screenshots back from your computer, tablet, Android phone with an SD card, etc.

You can choose the location where you lost your data. If you don't know the exact location, then choose the "I can't find my partition" option and scan the disk.

The software will scan the selected hard drive worldwide to search for all your lost or deleted screenshots. Once the scan is complete, all the recently deleted photos will be displayed on the screen.

Finally, you can have a preview of the files you want to recover, select the screenshots you want, and click on the Recover option to get them back.

Hopefully, now you've learned how to get a screenshot on Mac and Windows both. It is easy to keep track of the screenshots. And if you ever lost some important screenshots, then the Recoverit Photo Recovery tool is always here for your help.

Further, read and get the exact guide on recovering pictures from Photo Booth.
- 2 minutes to read it.
Download | Win Download | Mac

How to Recover Sound Files from Zoom H1 Recorder