Backups are way too important. Yet sometimes while creating backups for the data, you might have confronted an error with a code i.e. 0x807800c5. Suddenly a pop up appears on screen saying windows 10 backup error 0x807800c5. This article is your guide to resolve this windows backup error code 0x807800c5.

Hi, I'm using Win10 Home and want to save the backup on an external hard drive. It only worked the first time, then no backup could be completed due to the following error: 0x807800C5

PLEASE NOTE: I'm a simple user, I've read other posts regarding this issue and didn't understand the suggested solutions / how to do them. Could you please be so kind and suggest a solution for a no IT guy. Thank u.

"There was a failure in preparing the backup image of one of the volumes in the backup set. Details: The mounted backup volume is inaccessible. Please retry the operation". Would appreciate some help. Thank you.

Creating backup is an essential requirement for all the users as this is going to protect your data from potential data loss consequences. This data can be in the form files, folders, documents, and media, all the data present on the hard drive, external drives, or even the operating system. Creating a backup of data on windows 10 usually comes across with an error that says windows 10 backup error 0x807800c5. This error code appears on the screen and impedes the process. This article will explain all about the error 0x807800c5 in detail.

The error code under discussion i.e. 0x807800c5 is said to be an error occurring in a situation when windows 10 users try to create a backup (system image) to a NAS storage (cloud storage). In this regard, an error message appears on the screen that says: "There was a failure in preparing the backup image of one of the volumes in the backup set. Details: The I/O operation has been aborted because of either a thread exit or an application request." Click on the error to see the details and you will come up with a short message i.e. windows 10 backup error 0x807800c5. The problem occurs when a system backup is created and tried to be stored on cloud storage. Else there appears no error when the same system image is saved on the external detachable storage device. This article will discuss all the aspects related to error code 0x807800c5 along with the solutions to resolve the windows backup error code 0x807800c5. Here are the topics that would be discussed in detail.

A system image is all about a backup of your operating system including the system files, system updates, applications, system software, system drivers, on the whole, a complete operating system which when transferred to another device, excludes the effort of reinstallation. The error code 0x807800c5under discussion is related to system image creation on windows 10. As mentioned above, trying to create a system image and storing it on a NAS (network associated storage) is the time when you are going to see the error message i.e. windows 10 backup error 0x807800c5. Several possible reasons may end up in this error. Here are a few of them:

Here is how it exactly looks:

There was a failure in preparing the backup image of one of the volumes in the backup set. (0x807800C5) 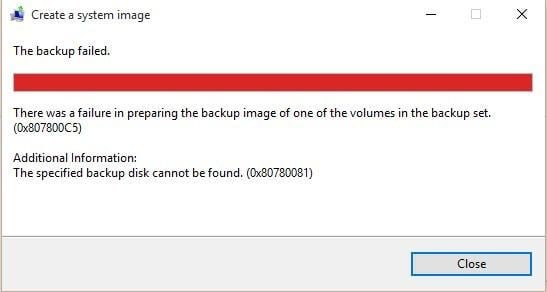 Additional information associated with this error code 0x807800C5 i.e. the specific backup disk cannot be found (0x80780081) or the process cannot access the file because it is being used by another process (0x80070020). Along with the windows 10 backup error 0x807800c5, you may also see these two error messages in the details.

Coming towards the solutions to resolve windows backup error code 0x807800c5, it is said that you can only create a single system image and save it on NAS storage. The second attempt would end up in this error. Here are the two built-in solutions to resolve the error 0x807800C5.

As mentioned above, creating a second system image is the problem that shows up with error 0x807800C5. But what if you change the name of the windows image backup folder? It can work. Moreover, you can remove the previous backups to make a room for a new one. Here are the steps to follow:

Step 1: In the main menu to windows, click This PC and locate the windows image backup.

Step 2: Once found, right-click the folder and select the option of rename. Change the name of the windows image backup folder to WindowsImageBackup.old. 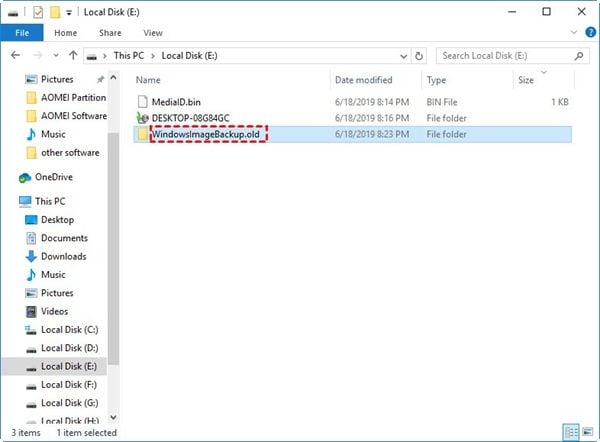 Step 3: Create a new system image now and try to save it on desired NAS storage. If still the error appears, then consider deleting the files i.e. MediaID.bin file, file with your computer name, and WindowsImageBackup folder. 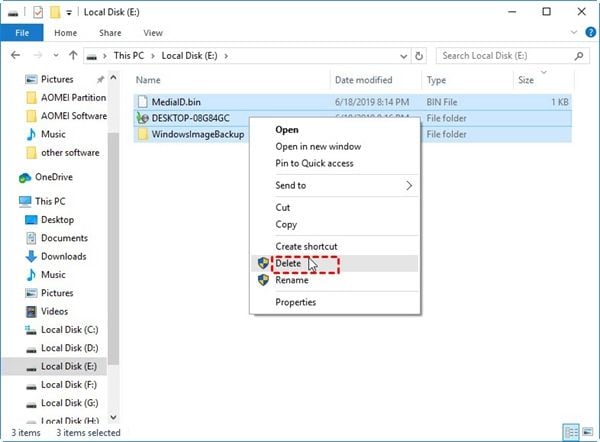 Once you delete the files, the error would be resolved. Now create the system image and you can now easily store it on NAS storage.

Another method to resolve windows 10 backup error 0x807800c5 is via disabling system protection or by deleting the restore points. How? Have a look!

Step 2: A pop-up window will appear. In this window, select the option of system protection. 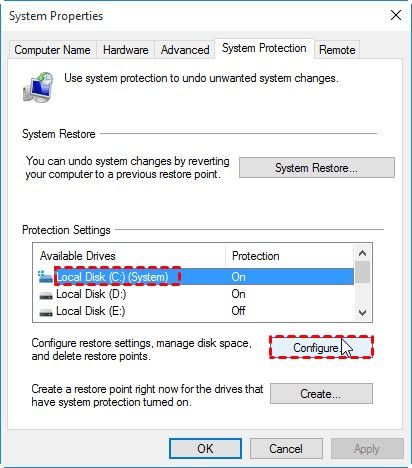 Step 4: In the next pop up window, check the option of disabling system protection, and click ok to proceed. 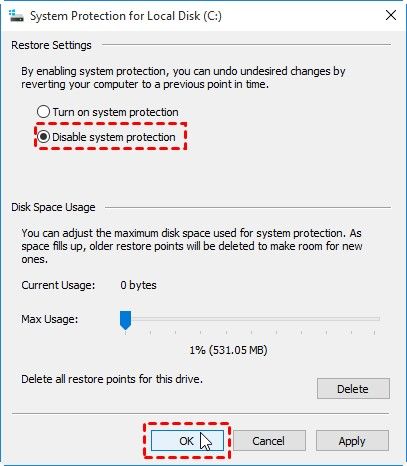 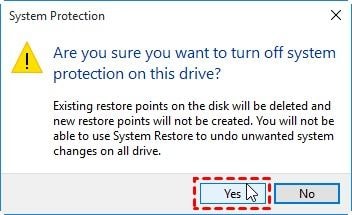 Step 6: Once all steps are completed, restart your device. You can turn on the system protection for a certain drive if required. Else the error is resolved. Now create the system image and store it to NAS storage.

If you have more than one drive with system protection on, then repeat from step 3 to step 5 for all the drives.

Part 3: How to Backup Windows 10 with AOMEI Backupper?

Apart from error code 0x807800c5, windows backup may also fail to work under situations like windows backup freeze at 97% or windows 10 backup 0 bytes. To resolve such issues, you can always take a back from a third party software solution. AOMEI backupper is an all-time love. As a savior, the software helps to create system/partition/disk and file backup. It is compatible with Windows 10/8.1/8/7/Vista/XP. Here is how you can use it.

Step 1: Download the software on your device and run a successful install.

Step 2: Once installed, launch the software on your device, and in the main menu, select the option of backup followed up by selecting system backup.

Step 4: Once everything is set, click start backup to complete the action.

Once the process is complete, the system image would be saved on destination location i.e. NAS storage for this particular case. You can also use the schedule feature of the software to schedule out your backup plan. It could be done on a daily, weekly, or monthly basis. The software also presents you with features like choosing the compression level for backup image files or doing a sector-by-sector backup.

Hence, in this article, you would get to know about an error code i.e. 0x807800c5 or windows backup error code 0x807800c5. It is an error associated with creating a system image and storing it on a NAS storage. This error code may appear due to corrupted or missing system files, already existing system images, and already existing partitions of previous versions of windows (operating system). To resolve the error, here in this article, two of the built-in techniques are introduced. The first one is to change the name of the windows image backup folder or by deleting the previous files. The second way is to delete the restore points or by disabling the system protection. A third party application software is also lined up to resolve the error. AOMEI backupper is the recommended backup software to resolve the Windows 10 backup error 0x807800c5.