During ancient times, data was kept secure by downloading the data on a computer's hard drive and storing them on a set of floppy disks. These floppy disks were then kept in physical containers. However with the advancement of technologies, backup changed from solid storage to wireless systems and different innovations.

Part 1. What Is Differential Backup?

Data backup is defined as a process of duplicating to allow for the chance of retrieving such a duplicate in the event of a data loss. In recent times, data backup occurs in different forms and it is a way to ensure vital information of organizations, which kept secure and that upon loss of data either in a natural disaster, theft or hardware loss, the information is recoverable.

There are three types of backup: full backups, differential backups and incremental backups. The differentiate are shown in the picture below. 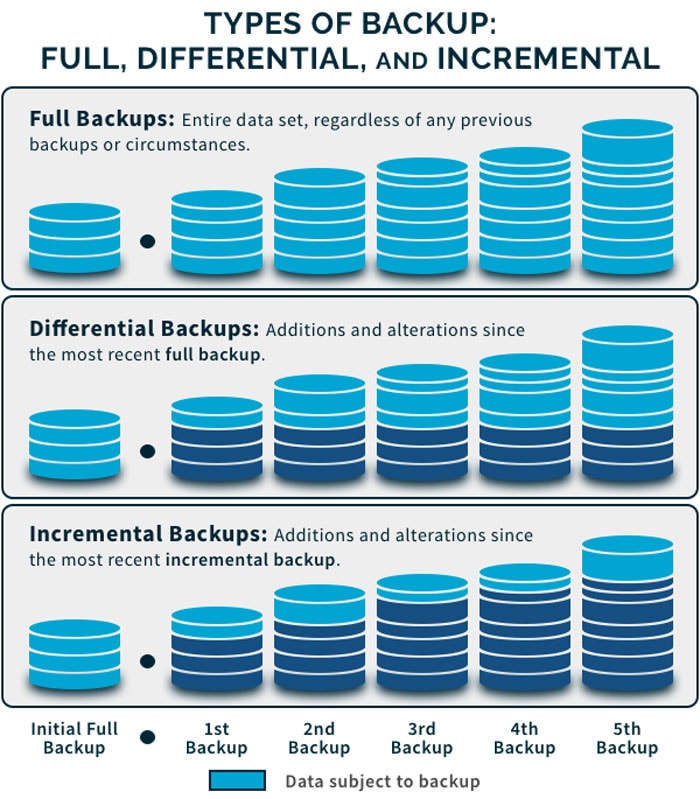 From it we can see that a reliable type of backup is the differential backup. Data backup is more than just storing data. It involves storing data that can be accessed in the future.

Additionally, differential backup is faster than a full system backup because it only deals with the latest data changes. This system also helps to save storage space and eliminates redundant files. The storage space required for the entire backup will steadily increase after each backup cycle. The backup speed or increase in size is dependent on the number of new files in the system. Therefore, it is faster relatively than saving every single file on the system during every system backup.

Differential and incremental backups are referred to as "smart backup" because they save time and disk space by storing only the recently changed files. The major differences between them are in their working processes and the results obtained from each backup. The technology used in designing both backup systems was because information on computer systems change slowly or rarely change. You will rarely find changes in the Operating system, system or user applications, and other forms of user data. Typically, a tiny percentage of information changes daily or weekly. Due to this, it is sensible to store data that changes daily.

The next point is to discuss the major differences between backup modes.

Further Read:
How to Make a Full System Backup in Windows
The Best Incremental Backup Software for Windows System

Part 3. How to Perform Differential Backup

One Way to Do Differential Backup

Download an AOMEI Backupper version that is compatible with their computer systems. After installation, launch it. In this example, we will use file backups. Click on Backup and then File Backup. 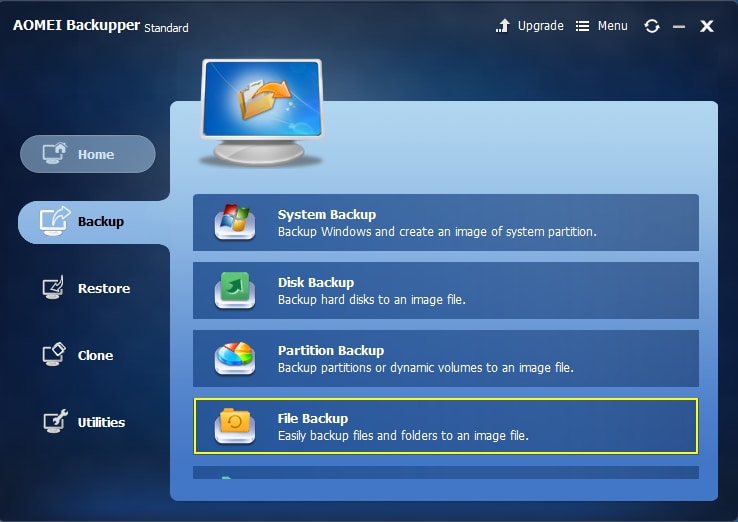 Click "Add File" or "Add Folder" to choose the desired files and folders that need to be backed up. After this, select a destination disk drive to store the backup. Files can be stored with a certain file extension if the software is upgraded to AOMEI Backupper Professional. 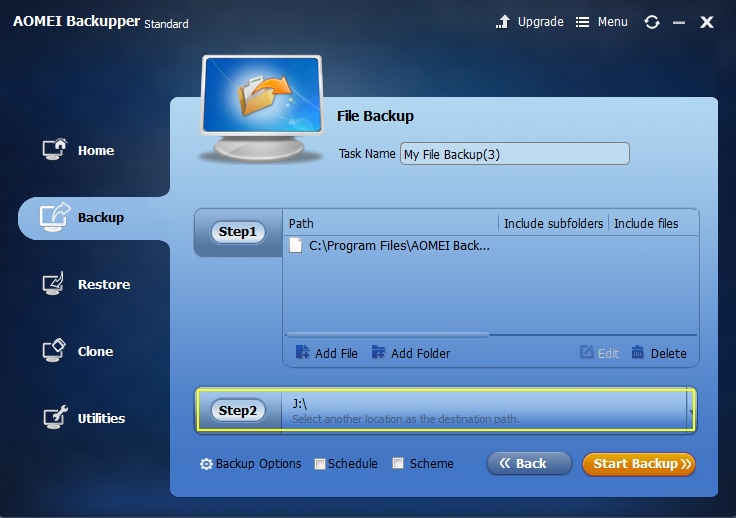 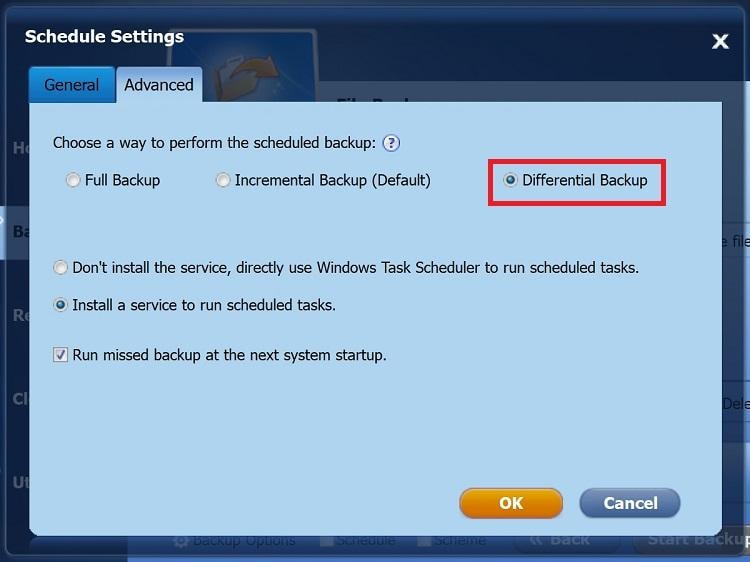 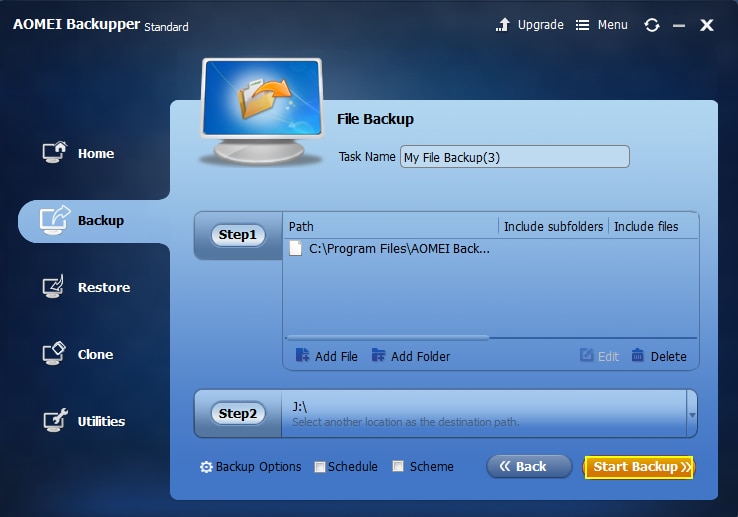 Another Way to Make Differential Backup

And maybe you have ever made backups via AOMEI Backupper for your files, folders, system, partitions, or hard drive. In this case, you can just follow the 3 simple steps to do the same - doing a differential backup.

Move the cursor to the finished backup task under the "Home" tab. With 3 tabs popping up, click on "backup" button and then "differential backup". 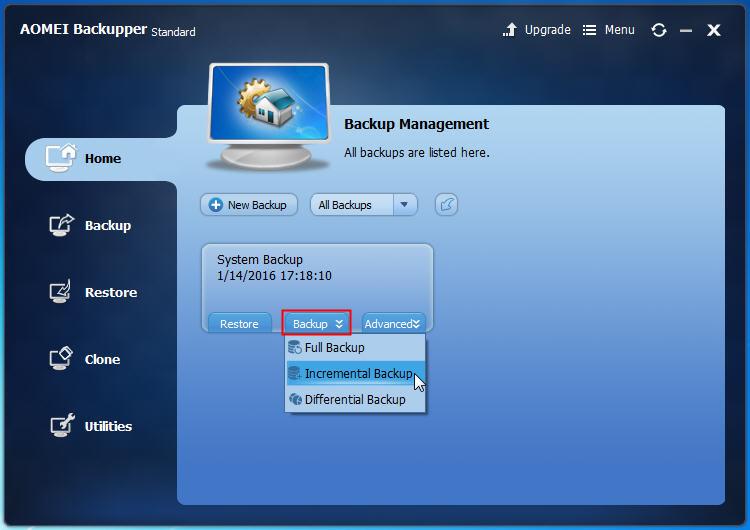 Later, you can write some comments on this differential backup task for easy identification. It is optional. And then click "Start" to continue. 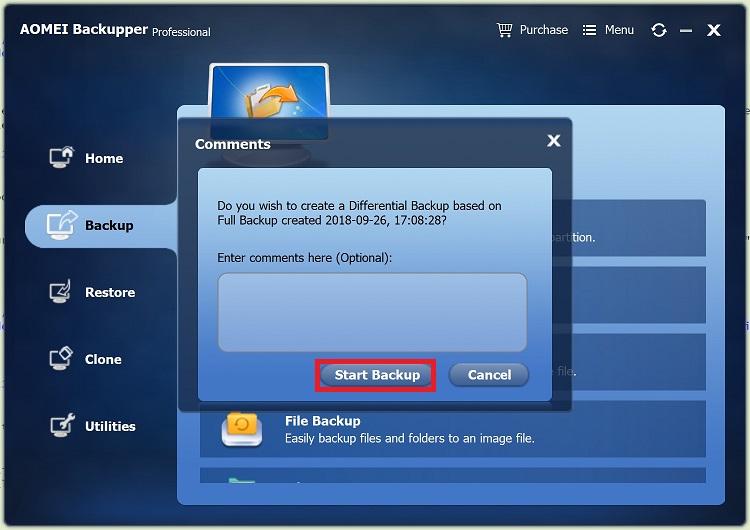 Finally, wait for a few minutes and then click "Finish" to complete the differential backup task. 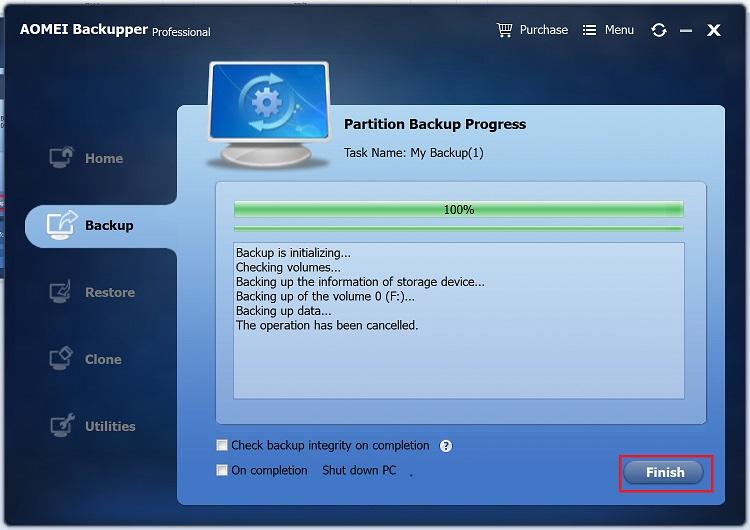 The AOMEI BAckupper data backup software is an impressive third party software that is effective in creating a differential backup and can also be used to easily restore the files.

Differential backups are very effective and a good way to save space and time during backup. Users who take advantage of this backup system will experience all the special features which are otherwise not available on the full backup. It is even quite easy to set up if the right third party software is used and the steps listed above are followed. And here AOMEI Backupper should be a top priority for you as it boasts such many user-friendly features. Now, download the backup software and have a try!

> Resources > Take Data Backup > What Is Differential Backup and How to Do It?