How to Clone RAID Array to Single Drive

Cloning a RAID to an SSD is the best way to be prepared for any possible adversity. In this post I will explain why and how to do it step by step.

RAID technology has great advantages, mainly in the professional environment of data management. Thanks to RAID technology it is possible to minimize the risk of data loss and optimize reading processes, however, this does not make it immune to failures and for this reason, precautionary measures are usually taken, such as cloning all the RAID information to a single SSD, since this way you can be prepared in case any problem occurs. It would be enough just to restore the data from the SSD back to the RAID.

Q: I have a security company and I store the recordings in a RAID 5, I am concerned that some disks are beginning to experience wear problems and I would like to back up the information to a single disk so that I can replace the old disks with new ones without losing the information they have stored. Is there a way to clone a raid array into a single unit?

RAID technology (redundant array of independent disks) allows you to use two or more disks to structure the information in certain ways to take full advantage of the capacities of the disks and thus achieve some benefits. There are different RAID levels and each one is focused on solving specific needs. Below I will explain the advantages and disadvantages of each.

RAID 0 sums the storage capacities of two or more disks and divides the information into small segments in sequential order (stripes), dividing the information equally between each of the disks, in this way, higher reading and writing speed is achieved, however, if any of the disks that make up a RAID 0 is damaged, this would corrupt the information that is stored on both disks and, additionally, will make it unusable. The fragmentation of the information without a parity segment makes them totally codependent and therefore vulnerable.

RAID 1 requires two or more disks, as it creates mirror copies of the main drives. This feature increases the reliability of the storage since if any disk is damaged, there will always be an identical copy available, and also, by having two or more disks with the same information, RAID 1 optimizes the reading processes by assigning to each disk a portion of the process. The main disadvantages of RAID 1 are that it wastes the unused space of the disks designated to function as a mirror and that by having exact copies of the information that exists on the main disk, these copies would only serve as a backup in case a disk fails as if a data corruption problem arises, the data would be corrupted on both the primary disk and the mirror disk.

RAID 2 is currently deprecated. This sought to distribute the processes of writing and reading at the bit level, which currently would require between 32 and 64 disks to store the data and at least one additional disk to store the parity. This process is not exactly efficient and is vulnerable to data loss if more than one disk is damaged at the same time.

RAID 4 requires a minimum of 3 disks and unlike RAID 3, it divides the information into blocks instead of bytes and also reserves a disk exclusively to store the parity data, which considerably accelerates the speed and stability of reading processes, by organizing information in blocks can serve several reading requests simultaneously with ease, however, if more than one disk fails at the same time, it would be impossible to reconstruct the information in the same way that happens with RAID 3.

RAID 5 does not reserve any particular disk to store parity. RAID 5 requires at least 3 disks and divides the information into blocks in the same way as in RAID 4, but with the difference that it will add a parity block for each stripe on each disk. This way, more space is available, however, RAID 5 will not be able to rebuild the information if more than one disk is damaged at the same time.

RAID 6 incorporates the versatility and advantages of RAID 5 but adds a parity block for each data stripe, in this way, it can reconstruct the information if two disks fail. RAID 6 is a considerably good method of protecting information, but due to the large number of parity blocks that RAID 6 creates, it greatly reduces disk space and slows down writing processes, nevertheless does not penalize reading processes at all.

Part 3: Why You Need to Clone RAID to a Single Drive?

Using RAID technology to improve data reading performance is a very common practice today. Many companies combine the benefits of NAS / DAS and RAID technologies to store large files securely and allow information to be accessible from multiple computers simultaneously without losing transfer speed while minimizing the risk of data corruption at a low cost. However, as I mentioned before, RAID technology is not foolproof. Many of the RAID levels cannot reconstruct the information when more than one or two disks fail, for this reason, cloning your RAID to a single disk would allow you to have a complete copy of the programs, configurations, and the system, in this way, if for some reason RAID cannot reconstruct the information, you would have a copy of the original information, which you could later use to replace the damaged information of your RAID and thus repair all the damage in a matter of minutes.

Part 4: How to Clone RAID Array to Single Drive/SSD in Windows?

AOMEI Backupper is a professional data backup software. This software was designed to perform all kinds of backup processes with great ease and includes a feature that will assist you to step by step to clone a disk or partition with total security.

Below I will show you how to use it.

Once you have opened the program, you should go to the "Clone" section located on the left panel and then click on "Disk Clone"

Here you must select your RAID as the source disk and then, click on "Next"

Once you've selected the "Source Disk", all you must do now is select a "Destination Disk ". 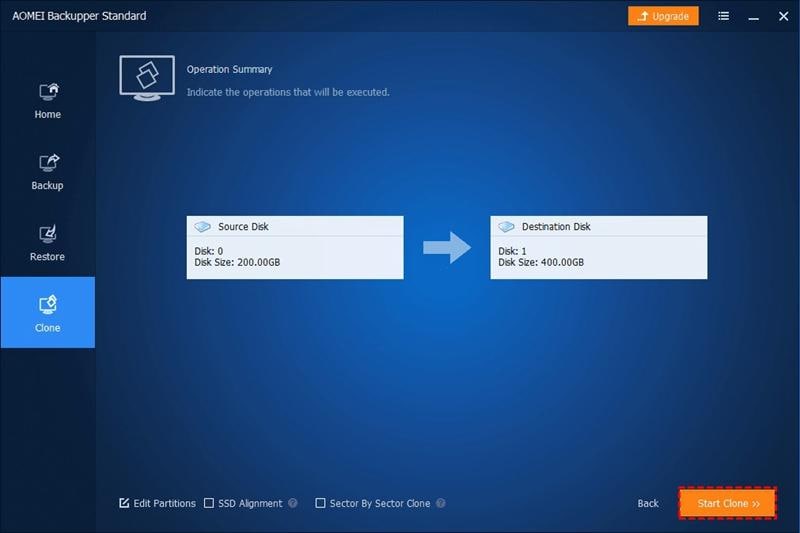 Now all you have to do is click on "Start Clone"

Many companies choose to use RAID technology to manage their data, however, and as I mentioned earlier, RAID technology is not foolproof. Many times the disks suffer wear and tear or even some physical damage that jeopardizes the integrity of the operation of your RAID, for this reason, it is highly recommended to clone your RAID to an SSD since in this way you could easily solve any adversity in very little time. Also, as you have noticed, you can use AOMEI Backupper to carry out this process with great ease and in a very short time.