Solved: The Specified Disk is Not Convertible

Working with computers is something that cannot be avoided in this generation. The reason is that almost all careers are linked with computers directly or indirectly. Another fact is that if there is something wrong with the computers that we use, it is certain that our productivity would reduce. So it is important to make sure that you know about the different common problems that arise with computers. And one of the most issue is the need to convert the disk that you have.

Overview and the reason for the error:

Converting a disk drive from MBR to GPT is something that a person who is closely related to computers would certainly have to do at least once. The major reason is that MBR disk drives have their limitations when it comes to different applications. But one problem is that when you try to convert the disk, an error saying ‘the specified disk is not convertible’ might occur. The reason is that you would have to clean and only then would you be able to convert the disk to GPT. Also, another problem is that windows do not allow you to clean the disk if you are currently running the disk.

A partition is a logical division of the hard disk that you have. The partition table would have the details of the divisions. There would be two types of divisions- MBR and GPT. MBR supports only sizes up to 2 TB and also there cannot be more than 4 partitions on the drive. On the other hand, GPT can have an infinite number of partitions, and also one partition would be able to have up to 256 TB of space. Also, the process of recovering the data that is lost is easy with GPT. 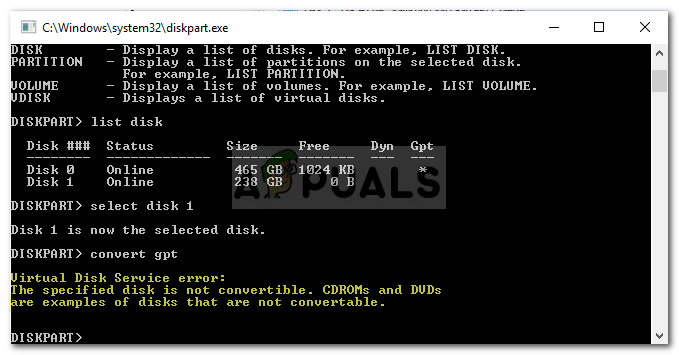 MBR or the master boot record is a comparatively old partition structure and hence they do not support the installation of new operating systems like the newer versions of windows.

The major reason for the error is that the operating system might be running on that particular disk. This would prohibit you from using the DiskPart utility for converting the disk to GPT. In such situations, you would have to use third-party software like the EaseUS partition.

Solving the error with the help of the DiskPart tool

1. Type in diskpart and press the enter button.

Then type in list disk. This command would list out all the available disks on the computer. In this list note the number of the disk that you want to convert.

Here the # needs to be replaced with the number of the disk. Then press enter. Type in clean and again press the enter key. Type in the command ‘convert mbr’ and hit Enter.

3. The process would begin and you would be notified when it is over.

Now try out the installation and if the error persists then you would have to use some sort of third-party application software like the GParted.

4. One other thing that needs to be taken into consideration is creating a backup of the disk partition before deleting or converting it.

This is because there are chances that all the data on the disk might be lost forever. So backing up data is quite important especially if the data is important.

Also, there are Remo Recover and other similar software that can be used to recover data that has already been lost during the conversion or cleaning process.

When it comes to computers and disk partitions, the process of converting to GPT is a process that would be required occasionally. But if an error occurs, then it would be necessary to clean the disk before converting it. Follow the steps carefully to solve the error. But if you cannot get it done, then make sure that you seek the advice from an expert.