How to Update MacOS? A Complete Guide

MacOS updates usually contain new security fixes and additional features. Here are some methods on how to update your MacOS.

With the introduction of modern Operating Systems, managing a computer has become easier than ever before. The operating system interacts with a computer's hardware by conveying the user's commands to the hardware. It also acts as a platform for all other software on the computer by providing necessary resources for them to function properly. Apple has been a pioneer in the technology industry most famous for providing cutting edge designs and updates in their devices and software. MacOS is one of the company's biggest creation. It is the second most consumed operating systems in the world.

Apple's security through its operating system is impenetrable. It is nearly impossible to hack through Apple's computers but the stored data is vulnerable during an update that could lead to the deletion of important data like pictures, videos, and documents. Continue reading this post to know the answer to the following queries - How to update Mac OS and can you recover the data lost after such update?

MacOS was developed for Apple's line of computers. Hera-MacOS X server 1.0 was released in 1999, since then 15 versions have been launched in the market. In 2001, MacOS X 10 Cheetah was the first one to be released for commercial use. This operating system has been widely regarded as the inspiration and core behind the iOS, Apple's watchOS, and the tvOS. MacOS 10.14 Mojave is the latest version of Apple's computer-based operating system.

Mojave is compatible with Apple systems released after 2012. It supports almost all devices from desktops to laptops which include the latest versions of MacBook, MacBook Pro, Mac mini and the MacBook Air. It was initially offered in 22 different languages which were for the convenience of the user but with the latest update, Apple now offers 38 languages that can be changed from one to another by simply clicking on the system preferences. The user would just click on Language and Region and select the desired language from the list available.

The latest OS offers some exciting feature with its release.

Part 2. How to Check for Updates on Mac?

The latest update of any MacOS comes with its improvement in security and reliability. It includes updates in the browser-Safari and other apps like iTunes. Here are the steps to check for updates on Mojave. 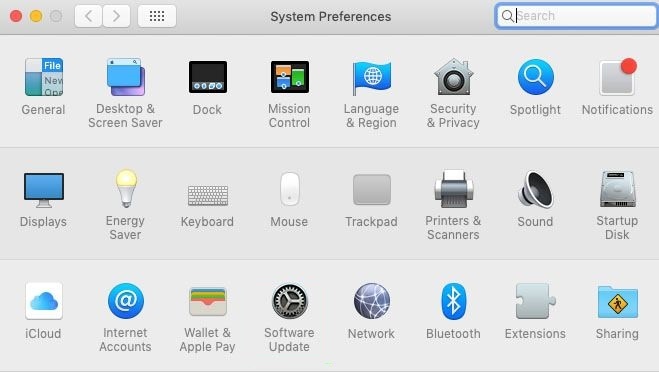 Part 3. How to Update Safari on Mac

To perform Safari browser update you need to follow the steps below.

There are many ways to update your MacOS which include checking for a software update within the system, downloading the operating system from Apple's website, and installing it from a Bootable USB drive. Here are the steps to update MacOS Mojave.

To ensure auto updates from further on, Check the "Automatically keep my Mac up to date." option.

When the latest Operating system is installed it updates all the system apps which include Safari, FaceTime, and others. You can also update it from the Apple App store by opening it and following the below-mentioned steps.

Apple has a tendency to release updates frequently to the operating system through the course of the year until the latest version is launched. Those updates cater to the software problems and bugs which are fixed but sometimes a new feature is also added with the update.

Updating and installing Apple's operating system is extremely easy. Sometime during the update, problems occur which causes an installation error that stops the downloading process. Many factors can halt the normal process like the Apple account issue when a user accidentally provides the incorrect password or a wrong Apple ID. The user also should check the Apple server as they are prone to collapse whenever a major update is introduced due to the heavy traffic on the servers. Here are the things that are required to fix the update error.

Part 5. How to Recover Lost Data Due to Mac Update?

It is common during a MacOS update that data tends to get erased and lost. Recoverit Data Recovery tool is the most convenient option to recover all the lost data in Mac. Developed by Wondershare, Recoverit Data Recovery Mac is used by more than 5,000,000 across the world. It is a recovery tool that provides such amazing and advanced features. The tool provides an instant preview of what is recovered after a thorough scan. It allows to connect almost every type of portable device and recover data from them.

If the data is important then the user must perform a data recovery operation to get back all the lost files using Recoverit Data Recovery tool for Mac. It offers an effortless solution to the user's data recovery problem caused during the installation. First, you are required to download the Recoverit software on your Mac from its official website and install it.

After successfully following the procedure and installing the software, run the program and follow the step-by-step guide on how to recover lost data.

After launching the Recoverit Mac data recovery software, select the location where data was deleted or lost after the update. Click "Start" button to initiate the process.

Data scanning will start in Recoverit, depending on the size of the data lost the scanning will take time to finish the scan and the result will be displayed on the program window.

The recovered files will be displayed on the Recoverit window. You can select the data by browsing around and locate the desired file using the preview feature, whether it be images and videos, you can preview the file in Recoverit. Click on the "Recover" button after following the procedure to get the files back. The restored data will be saved back to the source location.

Latest updates give you amazing new features and great user experience. These updates can cause some issues along the way. Now, you know what to do whenever you want to upgrade your MacOS by following different methods to ensure a safe and hassle-free process. Moreover, Recoverit Data Recovery guarantees data recovery in no time. You can recover lost files after Mac updating.

How to Partition a Hard Drive on Mac 2020