How to Fix Hard Drive Not Spinning

Hello, everyone, recently I just try to recover data from my old hard disk. My hard disk is Western Digital, model WD800JB-00JJC0. To make it simple, here are videos I upload here, which is showing the main problem. FYI, I had attached my hard disk to the IDE to USB 2.0 adapter and connect it to the power supply. (At first, I thought this was a clicking sound problem.)
I know there is a solution, i.e. freezing method, but I don't know if it was a good idea. Are there any other ways to fix the hard disk, other than the freezing method? Oh, before that, I know about PCB replacement, but I want to know if it's effective to fix this problem, plus this is a little expensive to me, so I don't want to risk wasting money.

You turn on your device and hear the spinning sound of the hard drive. This is a common practice. But what about the times, you won’t hear any spinning of the drive? It reflects the consequences in which you are unable to access the drive and data stored in it. In this context, you are confronting an error i.e. hard drive won’t spin. Else all you hear is a beeping noise when the platters fail to spin the hard drive. In this regard, all you can do is to retrieve the data from the drive via third-party recovery software. This article explains all the consequences that may lead to the hard drive doesn’t spin, along with all the potential reasons and quick-fix solutions to get rid of the problem. Here are the topics that would be discussed in detail.

Part 1: Why Your Hard Drive is Not Spinning?

As mentioned above, certain consequences may lead to a situation i.e. hard drive stops spinning. Here are some of them.

1. Electrical failure on the Printed Circuit Board

All electrical devices including the hard drives of computers/laptops are not immune against any electrical surge. A low electrical supply or the intense electrical input, in both cases, your drive would be damaged. The components present on the printed circuit board (PCB) of the hard drive would get out of order. The power surge would also affect the power supply unit of your device. In both cases, you would get different symptoms. In case, you turn on your device and it turns it off as a response, the problem is with the supply unit. On the other hand, if the device is turned on and you won’t get any response i.e. running any program, then it is an indication that the PCB is not working.

2. The read/write head stuck on the platter

Along with PCB, another component of the hard drive is its read-write head. These are the tiny copper coils that cover the hard disk drive platter. It uses electromagnetic signals to read/write the data. If the read/write head collides with the platter, it can impede the spinning of the drive. The clipping noise comes when the drive is constantly trying to spin yet the head is stuck in the way. Even if they are untangled, yet it leaves dings on the surface of the drive which next makes it impossible for the drive region to save the data. Apart from dings, you can also see the rotational scoring on the surface as the drive continues to spin while heads impeding. As mentioned above, the beeping sound is the first warning that the read/write head is causing the hard drive to stop spinning.

3. Seizure of the platter motor

There are several factors involved inappropriate functioning of the hard drive. When the drive is working normally, it spins on a spindle that works via motor. This motor carries bearings that are way too sensitive to drops, shocks, and sudden disruptions. In case, the drive is dropped, the bearings will seize and in turn causing the spindle to not spin. This issue is generally fixed with a platter swap. It is a process in which the PCB, the read/write assembly, and platters are removed from the bad drive and fixed to a new drive. This will rehabilitate the normal functioning of the platter.

When the hard drive stops spinning, you may get clear symptoms that something is wrong. Here are two of the important symptoms to show up with the error i.e. hard drive won’t spin.

The spinning of the drive counts for the appropriate functioning of the hard drive. The time, the hard drive stops spinning, its when the device fails to recognize the drive. In turn, the data is inaccessible. In this situation, you cannot employ any third-party recovery software to retrieve the data unless you resolve the problem at first.

2. You can’t recover the data from the hard drive.

While attempting to recover data from the drive, you may receive an error i.e. hard drive won’t spin. In this situation, it is best to send your hard drive for repair.

Part 3: How to Fix Hard Drive Not Spinning Up

Once your device is showing symptoms for hard drive won’t spin error, this section carries some quick-fix solutions to resolve the problem. Have a look!

As mentioned above, hard drives are sensitive to power surges. An increment or decrement in the power supply will end up damaging the drive. This power surge will destroy the PCB of the drive. This damage will show a signal i.e. you would feel a burning smell from the drive. But if you won’t feel ay smell, try to connect the drive with other devices using the different power cable. Sometimes, the issue is with connection cables. But in case, the hard drive won’t spin persists, it is in black and white that there is a mechanical or technical issue in the drive.

The printed circuit board (abbreviated as PCB), is the main component that allows the electric supply to reach various components of the drive. The main components present on PCB are i.e. Main Controller IC, Motor Controller Chip, Cache Chip, ROM/BIOS, Board Number, and TVS Diodes. Failure of any one of the components would be considered as HDD failure. The most sensitive part of HDD is the diode. When it shorts, it causes the hard drive to burn. Here are the steps to carry out a troubleshoot PCB. All you need is a multimeter and screwdriver.

Step 1: Open the hard drive and take out the PCB via a screwdriver.

Step 2: With the two probes of multimeter, touch both ends of the diode.

Step 3: In case, you hear a beeping sound, the screen will flash with a number near zero. This represents the shorted diode.

Step 4: Remove the diode, and screw back the drive to recover the data from it and discard it. But if you want to reuse the same drive, you have to replace the diode. 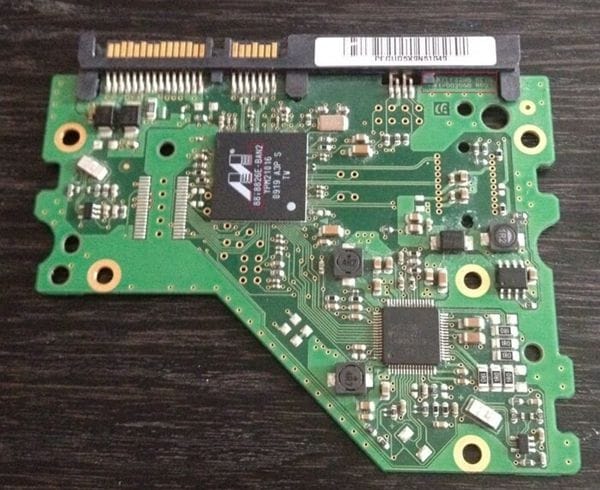 As mentioned above, if you are dealing with a situation in which the read/write head is stick with the platter, then it may also result in hard drive stops spinning. Here are the steps to follow to resolve the problem.

Step 1: Start the process by opening the hard drive, use a screwdriver, and open the lid of the drive.

Step 2: If you see the disk head tangled with the platter, it is the main reason causing the hard drive won’t spin. Detangle the head and platter and park the head back to its normal position. This can be done with a screwdriver or a hook.

Step 3: Put the screwdriver in the middle of the spindle and pull the head out with a hook. Avoid applying stress on the platter.

Step 4: Now screw back the lid to close the drive and connect it back with your device to check if the issue is resolved or not. 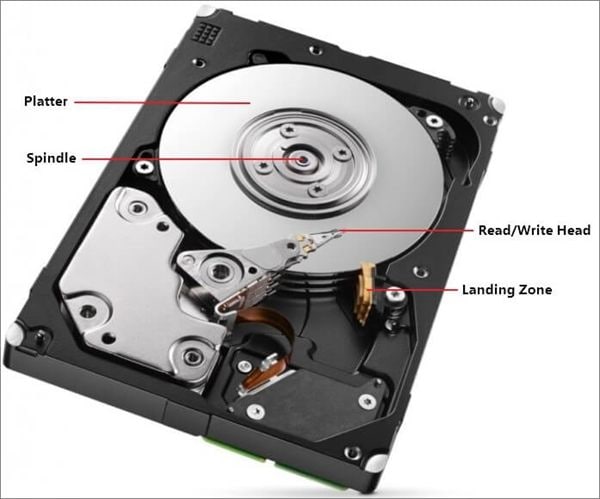 The spindle works by the motor. This helps it to spin. In the motor, there are bearings. Sensitive to shock and falls, if the hard drive fails, the motor would be seized due to bearings warned out. Another reason is that the spindle is damaged. In both cases, the hard drive won’t spin. To fix the issue, sometimes, a platter swap is considered a safe option.

Part 4: How to Recover Data from a Hard Drive?

Hard drive won’t spin is quite a hectic error though. You cannot access the drive or data saved in it. Else you can also face a potential data loss. To recover the data, you need a third-party recovery software. In this regard, Recoverit data recovery is the safest option to opt for. It helps to recover the data from damaged or corrupted hard drives. To deal with this, the software carries a feature termed as recoverit hard drive failure recovery mode.

Here is how the software is used to recover the data from a damaged drive.

Step 1: Start the process with downloading and then installing recoverit damaged hard drive recovery on your device.

Step 3: In the next window, select the damaged hard drive from where you lost the data. Click start to continue. The software will start scanning the drive.

Step 4: As the process starts, the software will undergo a quick scan on the drive to look for all the deleted data files. If you cannot get the files, use all-around recovery mode.

Step 5: Once the scanning is complete, all the files would be retrieved and appear on the screen. Preview the files one by one and select the ones you want to restore. Click recovery to complete the action.

As soon as the process is completed, the targeted files would be recovered. Save the data files to a new location other than that from where you lost them at first.

Hence, hard drive won’t spin is a common yet frustrating error ever confronted. It will not allow the hard drive to spin and you will not be able to access the hard drive and data present on it. As soon as the hard drive stops spinning, your device will not recognize the hard drive. This error can arise due to intense power surges (high or low and either way), it could be due to entangled platter and read/write head or the seized spindle motor. In all the cases, this article explains some troubleshoot mechanisms (physical) to resolve the issue. It is recommended that you should send the damaged drive to a professional store for the repair process.