Should I Defrag an SSD

Many computer experts usually advise not to defrag SSDs frequently because defragmenting is not recommended for solid-state hard drives. But, how can you optimize the performance of SSDs if you can't defrag them? Here, we will explore corresponding detailed information to answer several questions.

Q: Should I defrag an SSD?

"Hello, friends! I am a little bit confused with the term - defragmenting. I use both the hard drive as well as SSD. But my question is - why should we defragment the hard drive, but not an SSD? How can I optimize the overall performance of my SSD?"

During the earlier times when the digital era was on the rise, we often used to defragment our hard disk frequently. Well, it has always been the best solution to optimize performance and keep the hard disk working at its top efficiency. The defragmenter utilities also consist of visualizations that enable us to view the moving of data sectors.

Nowadays, the latest computers, especially Windows 10 PCs, most probably incorporate SSD as the primary storage. Unlike hard disks, defragmenting is not required in SSDs. However, SSDs do need sporadic maintenance, which includes occasionally running the TRIM utility. By running this utility, the system assures that the deleted blocks are ready for reuse and properly marked.

Also, the latest SSDs mostly use different principles to operate than that of the hard drives. So, do we need to defrag our SSDs? What happens when we defrag them both regularly and occasionally? To find answers to these and similar questions, keep reading this post.

Part 1: SSD Defragmentation - What Does It Mean?

The process of Disk Defragging has been in use since the long ago. It is a great method to slightly improve the performance of the computer. If your computer system is running slow, without much maintenance for a couple of years or so, then defragging could be an excellent option to speed it up.

A traditional hard drive consists of mechanical parts such as read/write heads and moving parts. These are the moving parts; and thus, require regular maintenance. Thus, defragmenting is a standard maintenance operation. This process usually reorganizes the file information, thereby allowing the storing of data in a different, unbroken lock sequence. As a result, the performance of the disk improves since the read/write heads can read the data much quicker and faster. Besides, defragmentation is also useful as it re-arranges the data and stores it into the smallest blocks. Thus, it frees up the larger regions for additional storage. As a result, defragmentation will help achieve improved performance of a hard drive by enhancing its read/write performance.

That's all about defragmenting the hard drives. What about the SSDs? Does this process give similar results for SSDs as well? Well, Windows usually automate the defragging process of SSDs. We will learn more about SSD defragmentation in the below sections.

Part 2: What Happens When You Defrag SSD?

Well, the computer usually reorganizes the data upon defragging the hard drive. It is a time-consuming and tedious process that could run for several hours. Nevertheless, it will greatly change the system performance and make it more responsive.

The working principles of SSDs and HDDs are completely different. The solid-state drives use one unit to store all the data together. Moreover, it does not access memory sequentially. Instead, the memory is accessed randomly, which further improves the SSD performance, making it faster to read and write data.

In short, SSDs have a unique storage mechanism. Furthermore, it accesses the flash memory randomly, without any obstruction. Thus, SSDs don't need defragging since the optimization of access speed is not required.

So, you should avoid repeatedly defragging your SSD. That's because it will generate unnecessary, random writes to your SSD drive and also reduce the service life.

Part 3: Should I Defrag SSD?

As mentioned earlier, SSDs don't have any kind of moving mechanical parts like HDDs. Moreover, SSDs save the data electronically. If we consider the pace of operation, then SSDs are quite faster than that of hard drives. Besides being energy-efficient, solid-state drives also carry a low risk of damage upon dropping or shaking. All these features make the solid-state drive more convenient and popular.

Now, let's keep all this introduction aside and get back to the primary question - should you consider defragging your SSD? In short, the answer would be No. Well, we should consider two primary reasons while reviewing this answer.

The primary purpose of defragmentation is to improve performance. Thus, if there is a lack of performance, then defragging is required. If we consider the performance of SSDs, then they work completely fine.

The second reason why you shouldn't consider defragging your SSD is the shortening of the service life. The defragmentation could affect the health of SSD and reduce its service life.

1. Don't Defrag if the SSD Is Brand New!

Brand new SSDs do come with a higher speed, stability, performance, and reliability. But their performance reduces by passing time. After completing a few thousand cycles, the cells in SSD start deteriorating. However, it doesn't affect simple, everyday usage because these cells wear out after a very long time.

So, if your SSD is brand new, then it most probably doesn't lack the performance. You should avoid defragging such SSDs.

A normal computer user won't clean the entire SSD too frequently. After all, erasing all the data and files from the SSD and saving them back are time-consuming tasks. Remember, the defragging process reads all the data on your drive and then writes it back as required. As a result, it could affect the lifespan of the SSD.

Thus, if you want to improve or maintain the service life of your SSD, then you shouldn't defrag it regularly.

Now, most of you might have a question in mind - how to improve the performance of an SSD? If defragging is not a suitable choice, then what is the solution to optimize your SSD? If you want to find out defrag alternative for SSD, then check out the next section.

Part 4: How to Optimize SSD With Windows Drive Optimizer?

Well, the design and structure of SSDs are changed a lot over time. Now, they aren't as tiny and delicate as they used to be in the past. So, don't worry about issues, such as physical damage, wearing, etc. Moreover, you don't even need to visit the service center or install a third-party tool. You can comfortably optimize your SSD with a few clicks. Now, Windows 7/8/10 can automate the optimization process.

The process if further easy if you use Windows 8 or 10. These versions include the "Optimize Drives" application. You can follow the below steps to use this application for optimizing your SSD.

Step 1: Open the search box and write "optimize" in it. You will see the "Defragment and Optimize Drives" icon in the search result; click it. 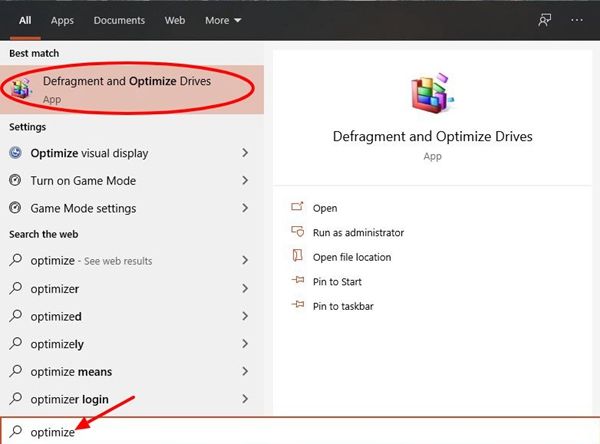 Step 2: In the second step, choose the SSD disk that you want to optimize. After that, click "Optimize." 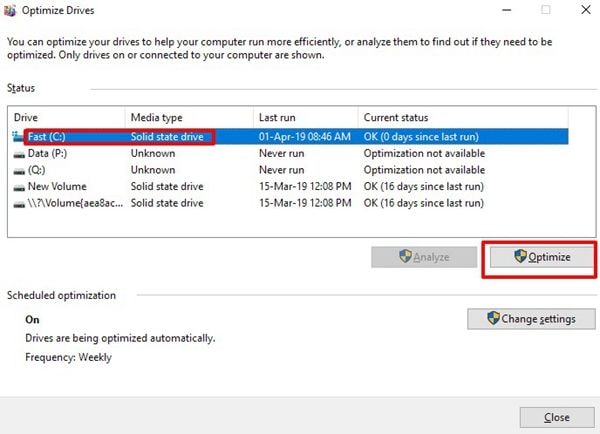 Step 3: You can also change the settings to enable scheduled optimization. 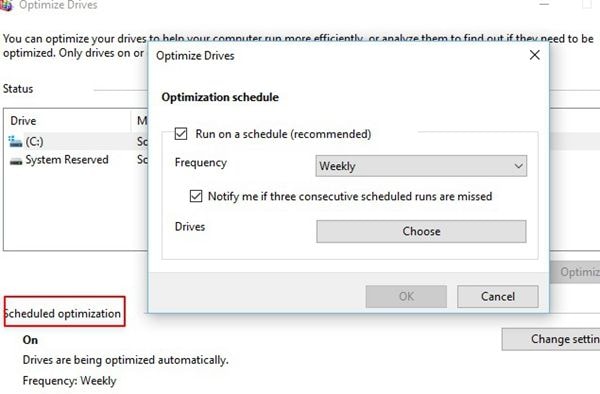 That's how you can use the Windows drive optimizer feature to optimize your SSD. As you can see, Windows 7/8/10 comes with a lot of features that help your SSD work to its complete potential.

As explained above, the SSDs don't contain mechanical parts such as read/write head and platters. It may raise several questions about the requirement of defragging in SSD. Well, defragging is not required. It is not going to affect your SSD in any way even if you don't perform it for several years. Here, we are going to cover some of the frequently asked questions about SSD defrag.

1. Should I Defrag SSD Before Installing Windows 10?

If you have a brand new SSD, then there won't be any fragments on the drive. Thus, you don't necessarily need to defrag that SSD before the installation of Windows 10. Likewise, if you have an old, used SSD, then Windows installation may erase the data from the target disk. Thus, make sure you take the backup of important files.

2. Should an SSD Be Defragmented?

It depends on several factors, such as the SSD, the frequency of defragging, etc. The lifespan of the SSD's flash memory is very short. Besides, SSDs have a limited read/write cycles. Thus, if you keep the SSD busy by consistently performing the read/write operations, then it would certainly hurt the solid-state drive.

Today, we have thoroughly discussed the term -defragmentation. Many users get excited when they hear that defragging can boost the performance and responsiveness of their computers. However, defragging the hard drive has benefits doesn't mean that you should defrag SSD too.

If you defrag an SSD, then it could affect its service lifespan and shorten it. That's because solid-state drives don't have any moving mechanical parts similar to hard disks. Also, SSDs already have a better performance that they don't need any extra step to further improve it. Instead, you can try to optimize your SSD if you seek more speed and performance.

What's The Difference Between SSD and HDD?

> Resources > Answer Hard Drive Problems > Should I Defrag an SSD