Looking for solutions to fix "screenshot on Mac not working" issue? Check out this guide as here we have covered four effective methods to resolve the problem.

"Recently, I bought a MacBook Pro and it was working perfectly. But, I was surprised to see that the screenshot on Mac not working and they are not saving to my desktop. So, can you tell me how I can fix the "Mac OS Sierra screenshot not working and saving" problem?"

There is no doubt that taking a screenshot on Mac is quite straightforward because Apple has given an easy way to do that. However, a lot of users have complained that they have encountered a "screenshot on Mac not working" problem. If you are also one of those users who are going through this same issue, then you might be looking for methods to fix it.

Well, you have come to the right place. Here, in this article, we have mentioned several ways you can try to come out of this problem without much hassle.

Part 1. What Is a Screenshot?

The term "Screenshot" is also known as a snapshot or screen capture, or print screen. It is a picture that shows the contents of your computer display. In simple words, it allows you to capture whatever you are seeing on your device screen. Once a screenshot is taken, you can save it as an image file where you can open it to edit.

At present, the screenshot feature is quite helpful and that's it is present in all electronic devices, such as smartphones, computers, and tablets. The feature is very useful in many situations, such as when you have to share the screen picture with others or to provide software reviews.

Part 2. How to Take a Screenshot on Mac?

Before you go for a solution to fix the "screenshot on Mac not working" issue, you need to first learn how to take a screenshot on Mac in the right way. It might be the case that you are capturing your system screen using the wrong commands and that's why you met with this annoying problem.

To screen capture for a window on Man, you need to follow the below steps:

Method 3. Screenshot a portion of the screen

Follow the below steps to capture a part of your screen:

Follow the steps to capture a dropdown menu on Mac:

That's how you can take a screenshot on Mac. If the above steps didn't work to take and save a screenshot on your Mac, then check out the next section where we have mentioned some solutions that can fix the problem you're going through.

Video Guide on How To Take A Screenshot on Mac

View More >
Save the screenshots but deleted them accidentally? Come to recover deleted photos on Mac.
- 2 minutes to read it.

Part 3. How to Fix "Screenshot on Mac Not Working"?

Well, you now got an idea about how to take a screenshot on Mac in the right way. But, if you still met with a "screenshot on Mac not working" problem, then try below methods that can probably help you to fix the issue with ease.

By default, the screenshot keyboard shortcuts are activated. But, it might be the case that you have configured the settings and don't remember at all. Thus, in this case, all you have to do is to check if the screenshot shortcut is active on your Mac.

Here are simple steps on how you can check: 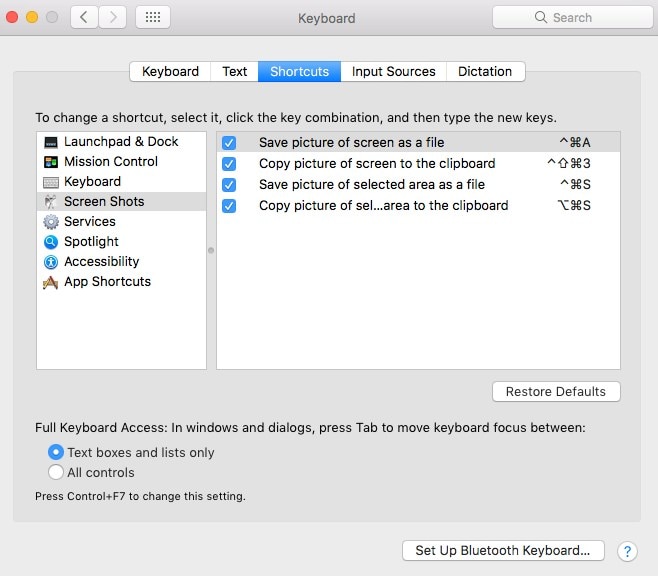 Once you ensure keyboard shortcuts for screenshots on your Mac are active, try again to take a screenshot and see whether the problem is gone. If no, then don't be panic as you can try the following solutions to fix it.

Another thing you can try is simply restarting your Mac. Applications and programs won't work perfectly if you've not restarted your system for a long time. Thus, in such cases, a simple restart on Mac can probably fix the problem without many efforts. Luckily, many users have fixed the problem with this method and so, you must try it too.

There are three ways you can try to restart your Mac, which include:

After restarting your Mac, the problem should be fixed now. But, if not, then go for the next solutions to fix the "screenshot on Mac not working" issue.

Solution 3. Use Grab to Screenshot on Mac

There are also other ways to take a screenshot on Mac you might don't aware of them. So, instead of taking screenshots using keyboard shortcuts, use Grab to capture screen on your system. Grab is a pre-installed application for Mac OS X and macOS that allows you to take screenshots of the entire screen, the whole window, or only a specified area of your screen.

Here are the simple steps on how to use Grab utility to take screenshots on Mac:

As per your requirements, you can choose any one option and take a screenshot.

Solution 4. Use Preview to Screenshot on Mac

Here are simple steps on how to use Preview to screenshot on Mac:

As you can see there are many alternatives to take a screenshot on Mac. Hopefully, the above methods help you to resolve the problem for you.

Part 4. How to Recover Lost Screenshots on Mac?

In some cases, although screenshots are saved by resolving the problem "screenshot on Mac not working", there are chances that you still lost them due to unknown reason. But, don't be panic if this situation happens to you because you still have a powerful method to recover your lost screenshots on your Mac. And that method is using Recoverit data recovery for Mac.

Luckily, Recoverit Data Recovery software is primarily designed to help those users who accidentally lost their files, such as photos, videos, audio, and documents. No matter how you lost your screenshots whether deleting by mistake, virus attack, or sudden power failure, the tool is powerful enough to work under numerous data loss scenarios.

Recovering media files with this tool takes a few minutes and three easy steps. In order to get back lost screenshots using Recoverit, you need to first download and install the software on your computer. Once you installed the software, follow the below steps:

To start with, run Recoverit. Now, you need to choose a hard drive location from where you have lost your screenshots and click the Start button.

Now, the program will start looking for lost files by performing a scan on your selected hard drive location. Here, it may take several minutes to complete the entire scan process.

Finally, preview the files and choose the desired files you want to get back after the scan is complete. And click on the "Recover" button to save recovered screenshots on your Mac.

So, you now know what you can do if you ever lost your important files on Mac. However, while you are saving recovered screenshots on Mac, don't save them to the location from where they get lost.

Part 5. Tips against "Screenshot on Mac Not Working"

Hopefully, the problem "screenshot on Mac not working" is fixed for you with the help of the above-mentioned methods. However, here are some more tips and tricks you can try to avoid facing the same problem again in the future.

The problem "screenshot on Mac not working" can be easily resolved if you know the right solutions for this. Luckily, here we have listed all probable methods that can help you to fix the issue with ease. Plus, if you ever end up losing your important screenshots on Mac, then we have also provided the solution to this problem too. It is Recoverit data recovery for Mac. With the help of this tool, you can easily rescue your lost screenshots.