Windows OS has come with a lot of smart upgrades, and numerous unexpected issues. Today, we take up the issue when the PC won't shut down. You might try to shut it down, but either it could automatically restart or simply take a long while to shut down, both of which can be frustrating. Firstly, we take up the issue where the PC won't shut down and would automatically restart.

Part 1: How to Fix PC won't Shut Down

Here, we list out a few methods that can be followed when your PC won’ shut down. These can prove to be helpful in a scenario when your PC is rebooting itself, even when have you opted for the shutdown option.

Let us discuss each of these methods:

This basic fix can be used when the PC won't shut down. It can automatically detect and fix any incorrect power settings which might be causing all the trouble to your shut down process.

2. What if the troubleshooter doesn’t detect anything?

It is possible that your troubleshooter won't return with any incorrect settings, much to your disappointment. It should be then noted that the problem might be with an incompatible driver. This is because whenever you opt for the sleep mode, the Operating System, that is Windows, sends a request to all the hardware components to coordinate for the sleep mode.

However, if the driver critical to the functioning of any hardware part is corrupt, it might not adhere to any of these requests and hence the PC won't shut down. To overcome this error, you would have to check for the Windows updates and make sure that the latest drivers have been installed for all the devices.

3. Device Manager to solve the issue when PC won't shut down

If all else fails, you might have to opt for the device manager to help you with the PC shut down. Device Manager would notify you if the Windows reported any hardware issue with any of the components that are present. You can follow the given steps to ensure that the process runs smoothly:

Part 2: The another Way to Fix PC won't Shut Down

You can always find results with one of the above-listed options. However, why stop there? You can also program your PC to shut down quickly. This can prove effective if you are looking for a short-cut to shut down your PC. This is because when PC won't shut down, it can get extremely frustrating for the user to tackle the hardware issues.

Here, we take a look at the ways we can program our PC to shut down faster. 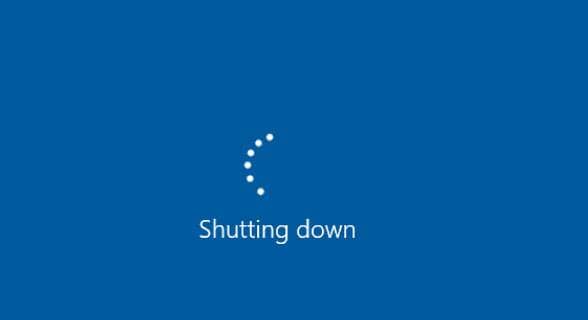 This is one of the most effective methods to get your power button to do more than just simply put your PC to sleep. Because most PCs’ have their power button set to put the device in the sleep mode, one can explore the possibility of using the button to achieve more than that.

This is how you can go about the process:

For the ones who wish to include a shortcut on their desktop to shut down the PC, the following steps can be performed:

Last, but not the least, is a 2-click button you can use to put your PC in the shutdown mode. If your PC won't shut down, you can right-click on the Start button, follow the length pop-up shortcut menu, and use the conventional ‘shut down’ button. Even though the method is conventional, but can be used by the users who have applied the troubleshooting procedure discussed above that was earlier preventing their PC from shutting down.

When the PC won't shut down, one should look into inspecting the problem that is causing the hindrance in the first place. The options that have been used to speed up the shutdown process can prove to be useful for the users who love to save their time on-the-go. If you have figured out some alternate method to tackle the issue when PC won't shut down, be sure to share it with us.

Easily and flexibly recover deleted or lost data from the computer.