"Video rendering error 10008”, this message of error prompts on your PC screen when you try to render a file that you have finished working.

One of the major causes of happening this- "iMovie video rendering error 10008" is, corruption! That is, it can be possible that a particular part of your video file might have got corrupt. Since it got corrupt; it can't be read by any software. As a result of which you are unable to render the video file in any medium. Moreover, you will be unable to import the videos to any other platforms such as YouTube or Facebook. It can annoy you if it persists after you have been retrying to render your video for some project and you have completely no idea about it. In this article, we are here to help you out by getting rid of this- "iMovie video rendering error 10008" error. Here, we will first list out for you some reasons behind getting this error and after that, we have come up with some significant steps and suggestions to fix this "iMovie video rendering error 10008".

Part 1: Possible Causes Behind Getting This- "iMovie Video Rendering Error 10008"

The following reasons can be the primary, potential causes of the error: "video rendering error 10008".

We are done with learning the possible situations and causes; let us also see what possible attempts we can successfully make to eliminate the error as mentioned.

Solution 1: Eliminating the frame which is corrupted

Since the main cause of "video rendering error 10008" is discussed to be the occurrence of those blackout frames in between the video to be rendered, we need to resolve the aspect. The occurrence of the blackout region in your video can be due to the transitions you have done to your videos. Initially, to start resolving this issue, you need to relocate the region which has to turn out black by getting through it frame by frame. You can also notice some flickering happening in the video when seen in the preview. You can opt for either cutting those black frames appearing in the video preview or can replace them with new frames of the video and it can work for you. Try rendering your video to your project and we hope you are successful in rendering and playing that video but do not forget that you should not delete the same video rendered in your project after you have finished your project or finished rendering the video. 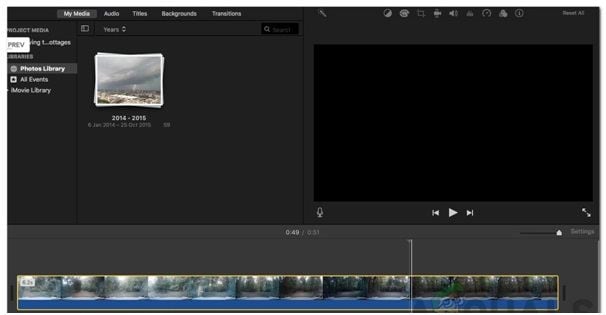 Solution 2: Deletion of videos or absence of video that is to be used in your project

Make sure that after you have imported the video to your task, your PC has that video stored in its memory. If you delete that video after rendering it into your project, then also you will face such a problem of – "video rendering error 10008". When you will try to play the same video again, all its parts and frames must be present on your computer, as it will only help iMovie to draw videos from the system. We will recommend you to save the videos again on the same location from where you have rendered them into your project if, in case, you have deleted them.

Changing the path of your video file after you have finished importing them will also be considered a deletion. So, you do not have to change the path or location of your video files so that, you will not be facing the error- "video rendering error 10008" again.

Solution 3: Different formats of your video files may create error

You also need to keep a check on the formats of different videos imported to the project because importing different videos of different file formats can create such an error sending scenario. If you are facing the same issue after following both the solutions above, then you should try converting all the videos into the same formats. After that, try rendering the video again.

Bonus Tip: Relax! If none of the above solutions worked for you, we recommend going with Wondershare Repairit Video Repair software to repair your corrupt video files. Below here are some easy to follow steps that will be going to help you very briefly in repairing your corrupted video file and eliminating the error -"video rendering error 10008".

After saving your repaired video file, you need to reload it in your Google slides presentation. Now you should be able to play the file perfectly and have stopped receiving the message-"video rendering error 10008".

If you are facing the same problem despite implementing all of the other methods, we recommend you to check if there's an issue with your system. Problems may arise due to system corruption. You can go for downloading several system repair software available online for performing a repair check.