How to open VMDK files

If you run a Virtual Machine on your computer, you may already be familiar with the VMDK files. These are Virtual Machine DIsk files that contain all the information of a virtual machine. Even though it’s quite rare for a user to access the content of a VMDK file, there are many situations when you might need to open it. For instance, if your VM has crashed and is not booting properly, you can open the VMDK file to retrieve the Virtual Machine content easily.

In saying that, however, opening a VMDK file isn’t as straightforward as you may think. You’ll have to follow a dedicated process to mount the VMDK files and retrieve its content. So, in this guide, we are going to take a look at the most effective ways to open a Virtual Machine Disk file on your PC.

VMDK stands for Virtual Machine Disk. These are basically disk files that contain all the information about the Virtual Machine you’re running. The files are saved with the ‘.vmdk’ extensions and they were first developed by VMware. As of now, the VMDK files are compatible with both VMware and VirtualBox virtual machines.

A VMDK file on a VMware Workstation contains two different parts, i.e., the descriptor and the flat file. The descriptor is basically a text file that you can open using any text editor such as Notepad. This text file contains nothing but the basic disk information including the disk IDs, Virtual Machine hardware version, and the disk geometry.

The VMDK flat file, on the other hand, contains all the data of the Virtual Machine. Unlike the descriptor file, you can’t open a flat file with your traditional text editors.

It’s also worth noting that the Virtual Machines on an ESXi server use a slightly different anatomy. In addition to the regular descriptor files, these virtual machines use virtual disk extent (instead of the flat files) to store RAW data.

So, now that you’re familiar with the basic anatomy of a VMDK file, let’s take a look at how to mount them and retrieve data from them.

The easiest way to mount a VMDK file on a Windows system is to use the VMware Workstation Player. It’s a dedicated virtualization software that’ll allow you to directly mount the VMDK files as separate volumes on your Windows system.

With VMware Workstation Player, you’ll be able to create dedicated volumes for the VMDK files and assign them individual letters as well. And, once the new partition is created, it’ll become way easier to copy all the content from the VMDK file to your Windows partitions.

Note: Keep in mind that you can open both Linux and Windows Server VMDK files using the VMware Workstation player. But, since Windows doesn’t support the Linux file system, you’ll need a third-party application to access it on your computer.

Follow these steps to mount a VMDK file as an individual partition on your Windows system.

Step 1 - First of all copy the “descriptor” and the “flat” files in the same folder. 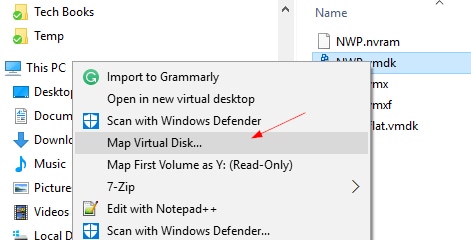 Step 3 - A new dialog box will open your screen. Here use the drop-down menu to specify the drive letter for the new volume. Make sure to tick the checkbox next to the “Open Drive in Windows Explorer After Mapping”. 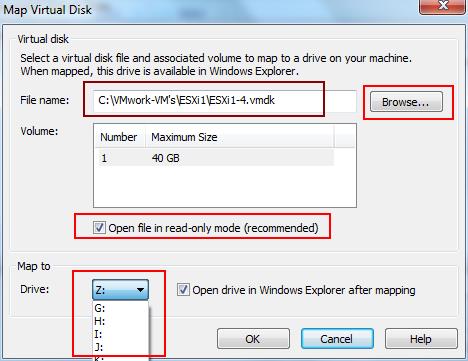 At this point, you’ll see a new partition within Windows explorer that’ll contain all the data of the VMDK file. Keep in mind that it’ll only be in read-only format, which means you’ll only be able to copy the content. And, after you’ve successfully transferred data from the partition, you can simply right-click it and tap “Disconnect Virtual Disk” to dismount the VMDK partition.

Another way to mount VMDK files directly on a Windows system is to use Linux Reader. It’s a professional tool that’s primarily designed to access Linux file systems (ext2, ext3, and ext4) on Windows.

Step 1 - Install and launch Linux Reader on your PC. 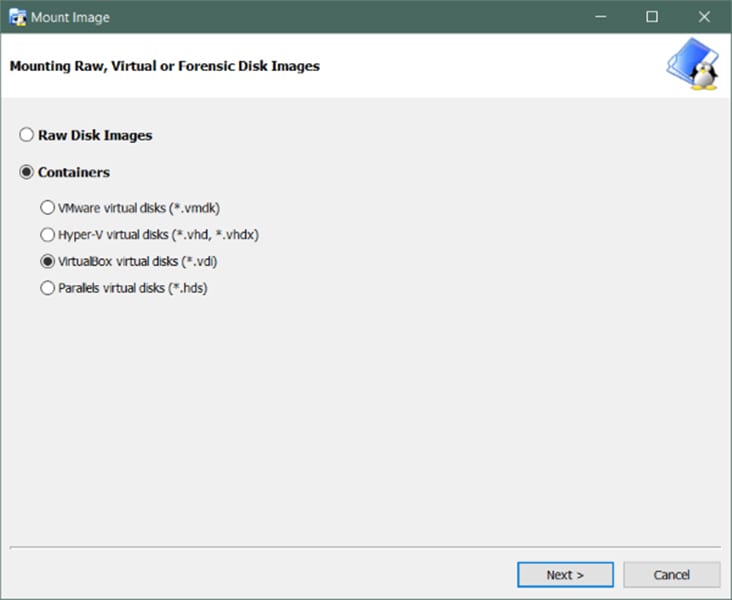 Step 3 - Browse to the folder that contains the VMDK files and then select the files. Click “Ok” to complete the process. 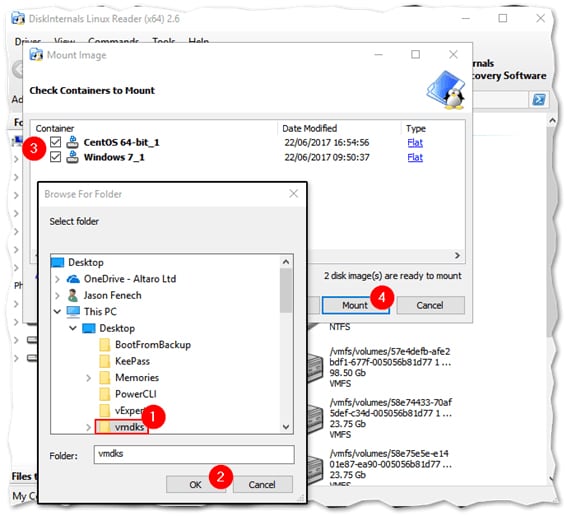 That’s it; Linux Reader will create a new partition for the VMDK file and you’ll be able to retrieve its content without any hassle. This will be a suitable method for users who want to open Linux VMDK files. Why? Because Linux Reader will also allow you to directly read the content from Linux file systems on your Windows system.

If you’re looking for the most effective way to open VMDK files on Windows, using a Zip file extractor will be the right solution. We recommend using WinZip for the job. It’s a free zip extractor that supports multiple file formats. This means you can use WinZip to extract .zip files, RAR files, ISO files, and even VMDK files.

Here’s how you can extract content from a VMDK file using WinZip.

Step 1 - Install and Launch WinZip on your PC.

Step 2 - Click “File>Open” and select the VMDK file that you want to extract.

Step 3 - Then, select all the content within the VMDK file and click “Unzip To” to choose the destination folder where you want to save it. 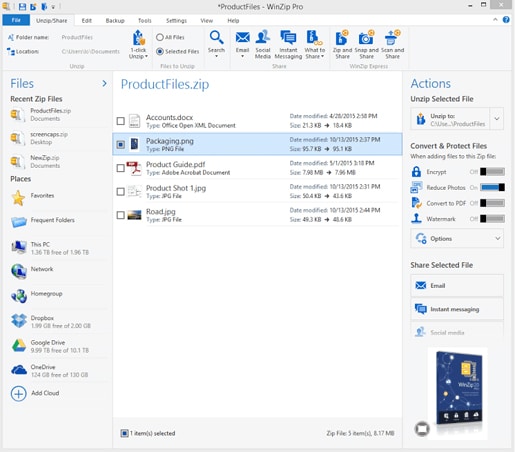 Step 4 - Finally, tap the “Unzip” button to complete the process.

WinZip will automatically extract and save the VMDK content on the selected destination folder. Once the process completes, you can even move this content to a different location as well.

So, that concludes our guide on how to open VMDK files on a Windows system. It doesn’t matter whether you want to access a Windows Virtual Machine Disk or the Linux-based VMDK files, the above-mentioned methods will help you get the job done without any hassle.

Yes, you can open VMDK files on your Windows system easily. To do this, you’ll need a dedicated application such as WinZip, Linux Reader, or the VMware Workstation Player. These tools will let you extract content from the VMDK files and save them on your Windows’ partition.