Check out this article to learn Synology Hybrid RAID (SHR) and its difference from Classic RAID.

Synology Hybrid RAID (SHR) is a Synology automated RAID management system intended to make storage volume deployment fastly and simple. If you are unfamiliar with RAID, SHR is recommended for configuring the storage volume on your Synology NAS.

How to expand and maximize SHR’s storage capacity? Does SHR provide fault tolerance? Read on as we will answer all of these questions in this guide. At the end of this article, you will learn Synology Hybrid RAID (SHR) and its differences from Classic RAID. 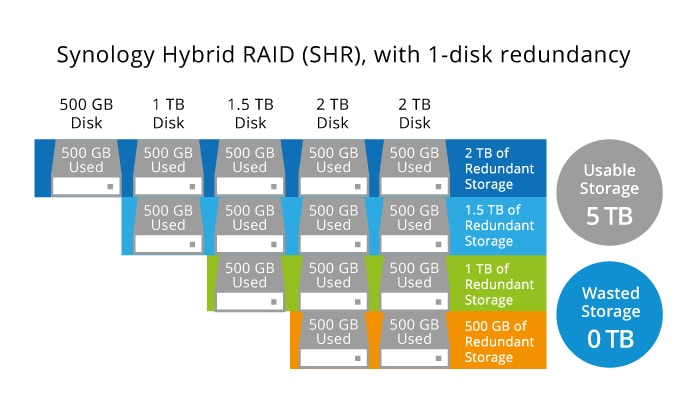 The main purpose of using an SHR is to combine Synology NAS drives in one logical unit to protect a device against data loss, resulting in possible disk failures that one cannot prevent using a classical RAID. Furthermore, this data allocation scheme offers enhanced capability, mixing drives of various capacities in one NAS box and saving space to keep data. 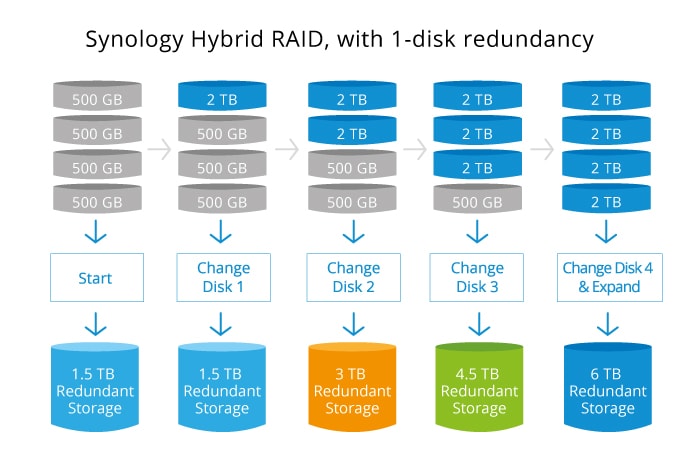 Here's an explanation for further understanding. For example, if I have 4 disks of 1 TB in this array, both SHR and RAID 5 work the same, where 1 disk will be saved for storage, and I will get 1 TB of data. But, if I changed my array and replaced the first disk with 3 TB, Raid 5 would only use it as a 1 TB disk. However, SHR will be able to use it as it is. But take note that SHR takes out the biggest disk for security.

To realize how SHR works, try replacing the second disk with another 3 TB; you will get a total of 5 TB. Compared to RAID 5, where the smallest disk decides the size, you will only get 3 TB with RAID 5.

Realizing Synology Hybrid RAID’s full potential is important to help you decide which data allocation scheme works best for your needs. Here are the features of SHR you have to consider:

A classic RAID creates storage based on the smallest drive in an array. In a normal RAID configuration, the system automatically looks at the smallest available capacity and sees all the other drives as the same, no matter how many drives you add to your array.

Comparatively, the system sees each drive as its capacity in a Synology Hybrid RAID environment and always sets one drive for redundancy. So, if you gradually add a larger drive in an SHR environment, SHR will start redundancy with the drive in the largest capacity and take advantage of succeeding drives that you will add to your array. That way, storage is maximized to its full capacity.

Part 3. How To Expand the Storage Capacity of SHR?

There are two recommended ways to expand the storage capacity of Synology Hybrid RAID. For one, you can replace SHR with larger drives or add additional drives.

When using certain RAID types, you can expand the storage capacity of a storage pool by replacing old drives with larger drives. Make sure you do it one at a time and that your new drive meets the drive requirements.

A single-drive SHR storage pool has no fault tolerance.

A minimum of four drives are required to create an SHR-2 storage pool that can withstand two drive failures. If you already have an SHR-1 storage pool (one-drive fault tolerance), you can use the “Change RAID Type” feature to convert it to SHR-2.

Part 5. SHR vs. Classic RAID - Which One Is Better?

Before we spot the differences between SHR vs. Classic RAID, let us first know what Classic RAID is since we first define the Synology Hybrid RAID (SHR).

A RAID, also known as a Redundant Array of Independent Disks, is a good server-level system for high-volume data storage. RAID systems use many small-capacity disk drives to store large amounts of data while increasing reliability and redundancy. The computer sees an array as a single logical unit of multiple disk drives. 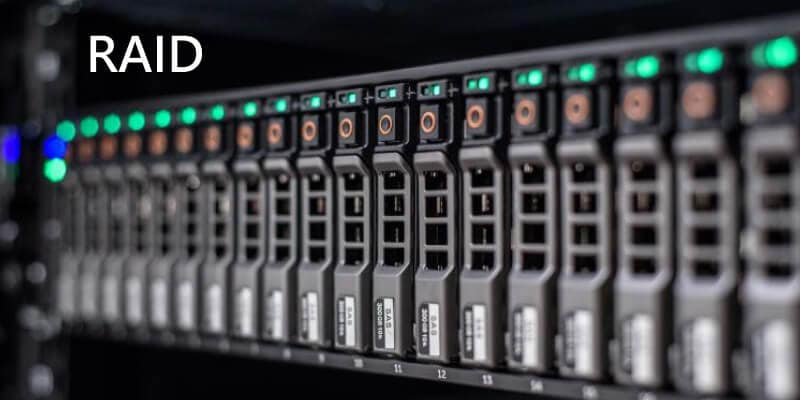 RAID storage can be accomplished in a variety of ways. Some RAID types prioritize performance, while others prioritize reliability, fault tolerance, or error correction. Which type you select is determined by your objectives.

The capability to take out a faulty drive and put a new one in its spot is prevalent in all RAID systems, and it is their real advantage. Data on a failed disk can be automatically rebuilt with most RAID types.

So, let's get down to business. Now that you know SHR and Classic RAID, the question is which one to choose. Both are excellent redundancy methods with distinct advantages. But first, let's look at their advantages and disadvantages:

Pros and Cons of SHR

Being able to mix drives

One can transfer drives to a new Synology with SHR support; the new NAS will detect volumes and data

Synology can still access the entire volume of data in the event of a drive failure, albeit much more slowly, until a replacement drive is installed

Pros and Cons of Classic RAID

It has wider options for deployment. More task-specific RAID sets, like RAID 10 or RAID 50, are available.

If you install hard drives in new equipment, new NAS/DAS enclosures are more likely to recognize them.

It is impossible to mix drives effectively, and the only way to increase total capacity is by swapping out every drive in the array.

After a drive fails, data is inaccessible until a new drive is installed (except RAID 1).

The creation of a RAID array takes much longer than the same SHR.

It's no surprise that I suggest using Synology Hybrid RAID (SHR) when working with a modern Synology NAS. The benefits in scaling options alone made it a truly outstanding choice for me, and for those who are brand loyal, you'd only make it more compelling. Traditional RAID remains very relevant and extremely useful. However, if you can use SHR in your NAS setup, I strongly advise you to do so at the installation time.

Furthermore, if you are still in doubt and undecided on what to choose, watch this video for a more elaborate explanation of Synology Hybrid RAID (SHR) and Classic Redundant Array of Independent Disks (RAID).

Synology Hybrid RAID has several key advantages over traditional RAID, which is also available as a configuration option for most Synology NAS models:

On the other hand, SHR has a slightly slower speed. In addition, a complicated structure may make it difficult to recover critical files in the event of data loss.

When Is Synology SHR Recovery Required?

Because it is primarily based on RAID technology, Synology Hybrid RAID has inherited its flaws, which may result in the inaccessibility of your important files:

Part 7. How To Recover Deleted or Lost Data From SHR-based Synology NAS Easily

If you unintentionally deleted or lost NAS files from SHR-based Synology NAS drives, do not be reluctant to use the specialized Wondershare Recoverit RAID data recovery software. It is the only tool that can truly address your issue.

Due to Recoverit’s many patented data recovery technologies, it can provide a higher level of service from recovery experts. Because of this, Recoverit has a high success rate of file recovery and getting better-quality files back.

Download and install Wondershare Recoverit on your PC. Then, launch it and navigate to NAS and Linux in the left bar. Now, select NAS Recovery. It will allow Recoverit to look for the NAS storage devices from which you lost the data. 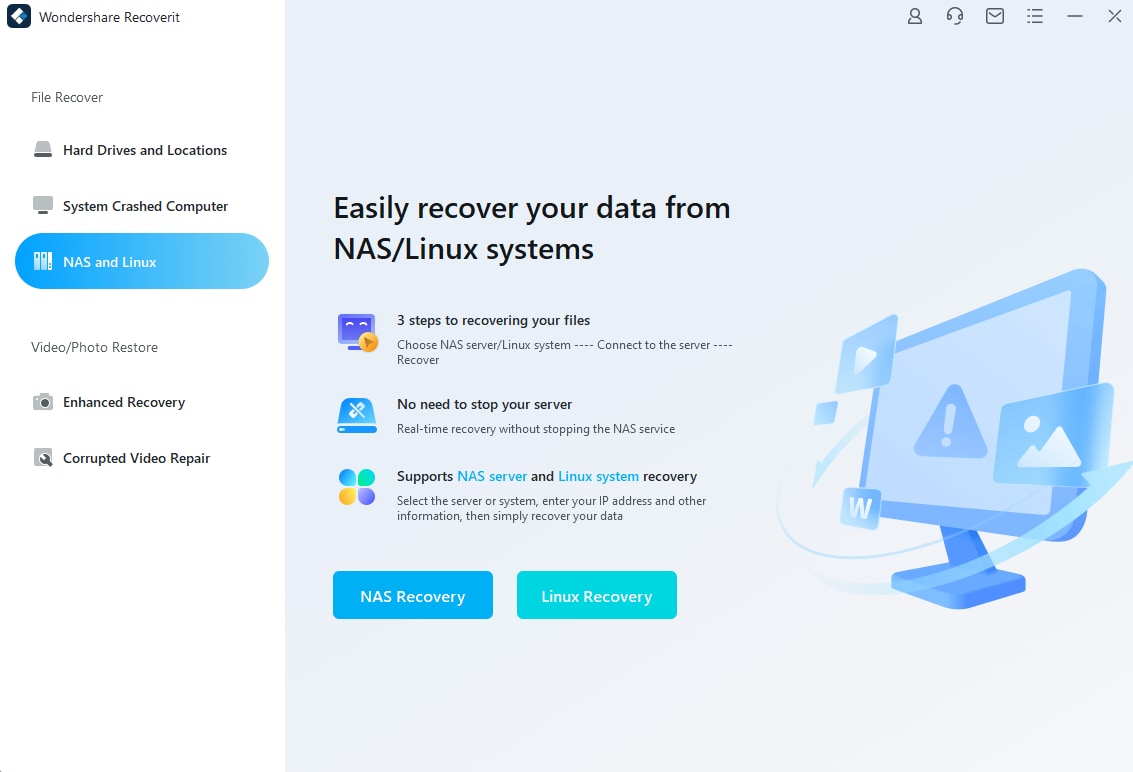 After Recoverit has finished searching, you will see the detected NAS devices on your screen under NAS Servers. Now, find the device from which you lost the data and click on it to continue. 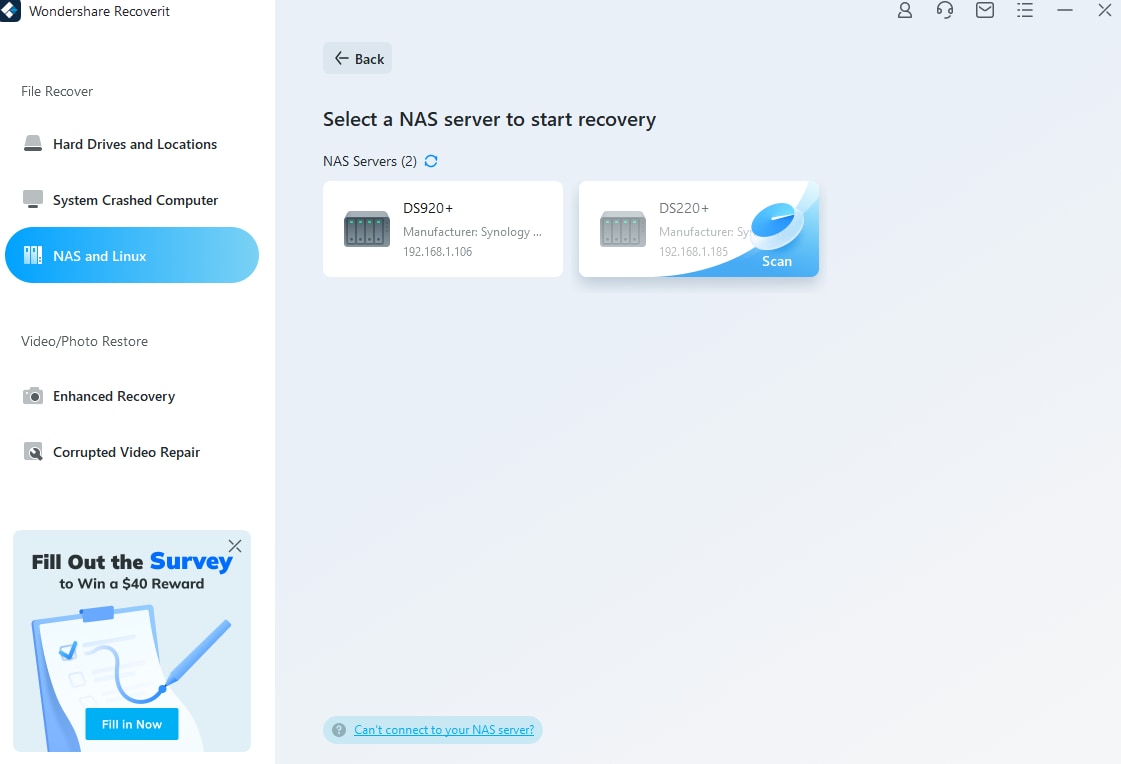 Give the requested information. After that, press Connect for Recoverit to establish a remote connection. 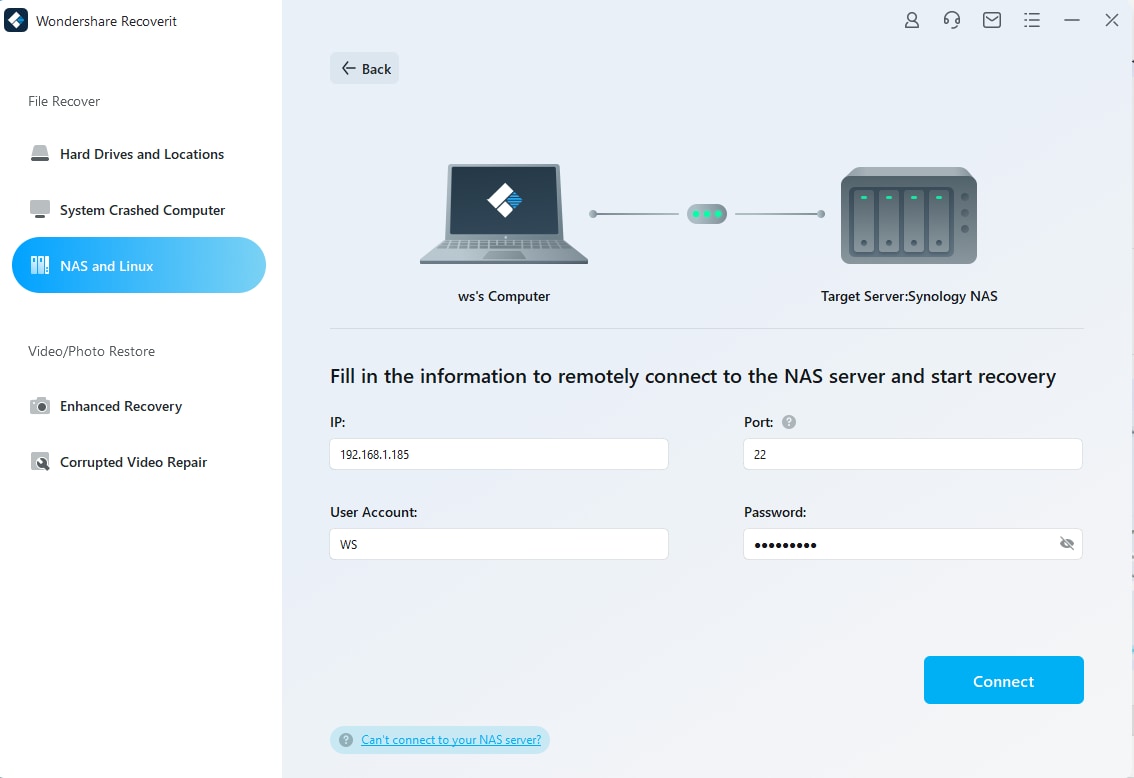 Step 3. Recover and Save Files.

Once connected, the program will begin automatic scanning to locate lost or deleted data in the selected NAS device. 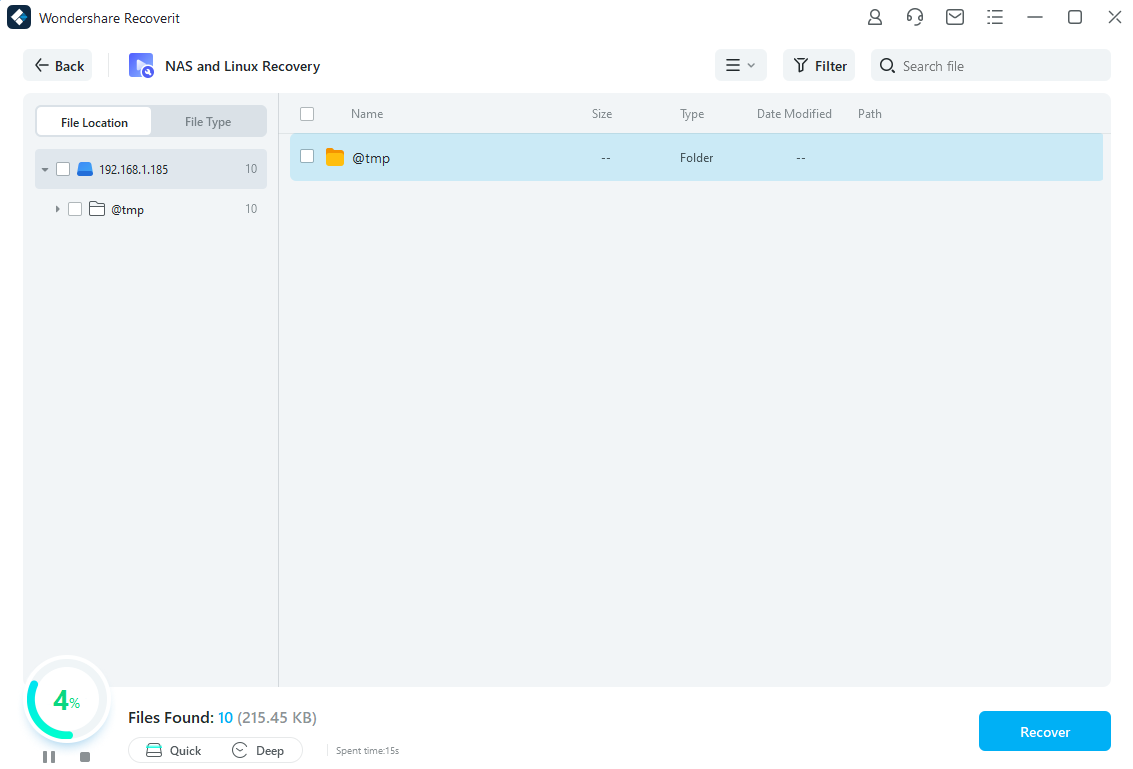 When the scanning is finished, Recoverit will allow you to preview the files you want to restore to your computer. Once you find the desired files, click Recover to begin the recovery. 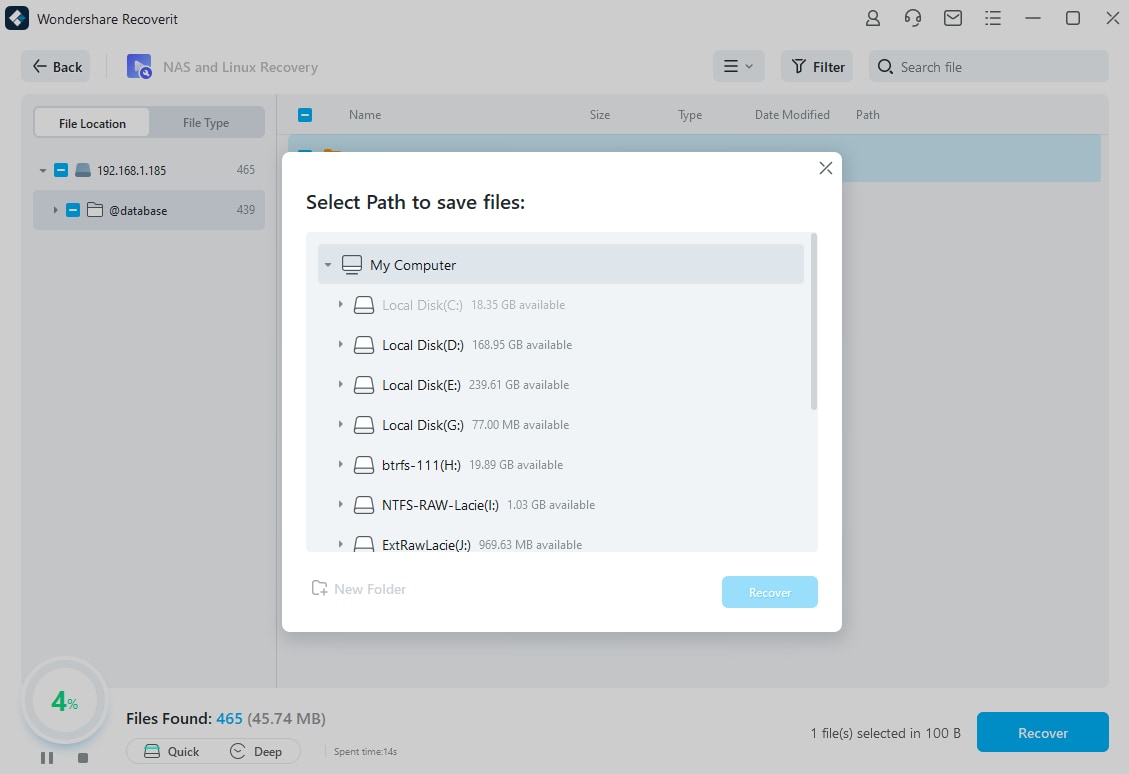 We hope you understand Synology Hybrid RAID (SHR) and its differences from Classic Redundant Array of Independent Disks (RAID). It is highly suggested to use SHR as it imposes features above Classic RAID. If you lost your files, download Recoverit RAID data recovery software for a safe and simple RAID data recovery.