What Is RAID 5 – Definition, Uses, Configuration, Upgrading, and More

Want to know what is RAID 5? We attach storage devices like SSDs and M2 Drives to our computers to secure our precious data. But in case of failure, we lose our data for good. In this article, we are going to discuss a technique for keeping data safe even in case of storage drive failure.

RAID stands for Redundant Array of Independent Disks", which is a method of storing the same data on multiple disk drives or SSDs so it can be retrieved safely if one of the storage devices fails permanently. There are many different RAID levels, and each handles the data and storage array differently. RAID 3 and RAID 4 used a single disk for saving parities. In the case of failure, it was impossible to recover the data. RAID 5 solved this problem as the parity is distributed in multiple storage devices in this configuration. 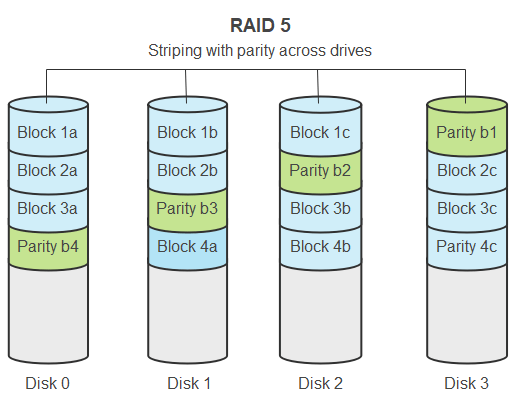 How Does RAID 5 Work?

Performance-wise, RAID 5 turned out to be a suitable choice, as the data write speed of this protected storage system was more or less 230 MBps, while the read speed was slightly slower at around 195 MBps.

What Is RAID 5 Used for?

RAID 5 is frequently utilized for storage since it provides a suitable compromise of capacity and performance. It's also popular among applications that require high availability, such as database servers and customer information storage in customer services. RAID 5 may also be used for backup and recovery purposes.

Advantages and Disadvantages of RAID 5

No bottleneck occurs in the RAID Level 5 data protection method.

Write time of RAID 5 is speedy.

The same data is copied on different disks so that you can recover data from RAID 5 in case of a disk failure.

The writing speed of RAID 5 is very fast, approximately 230 MBps.

RAID 5 is an affordable storage system.

This storage mechanism is safer and faster than the older mechanisms.

The data may never recover if two or more discs with parity are out of order.

Reading speed is slower around 195 MBps.

For configuring a RAID Level 5 storage system you need at least 3 SSDs or Disk Drives on Windows 10. However, RAID 5 made up of 4 storage devices is considered better as it has high performance and more data safety. You can easily set up this storage system using Windows Server. 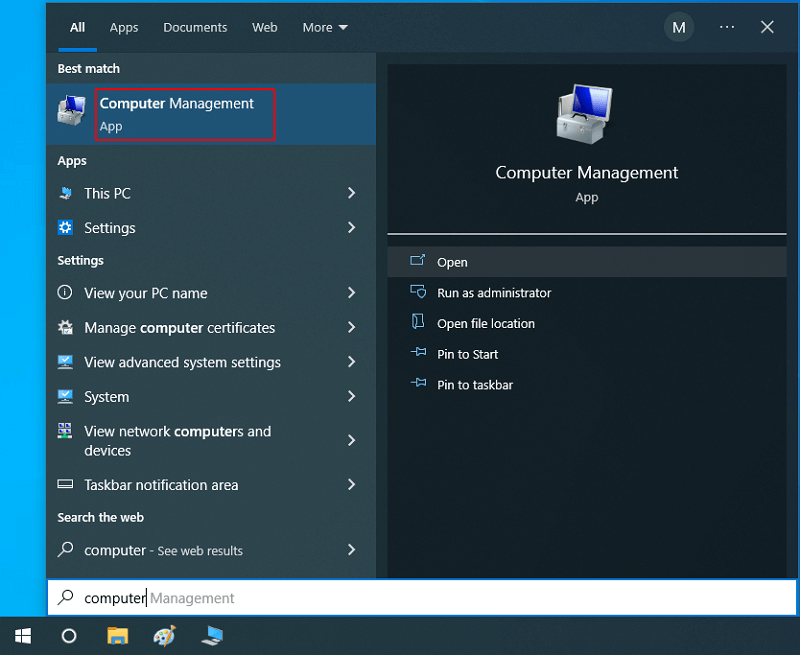 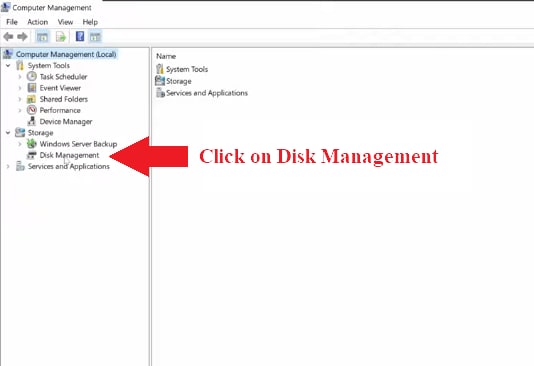 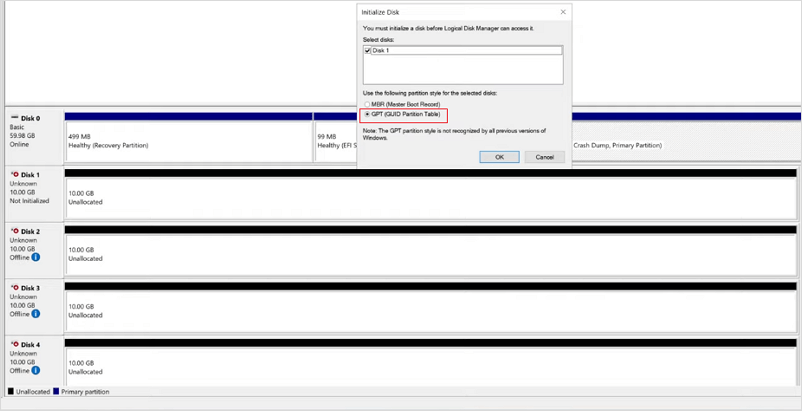 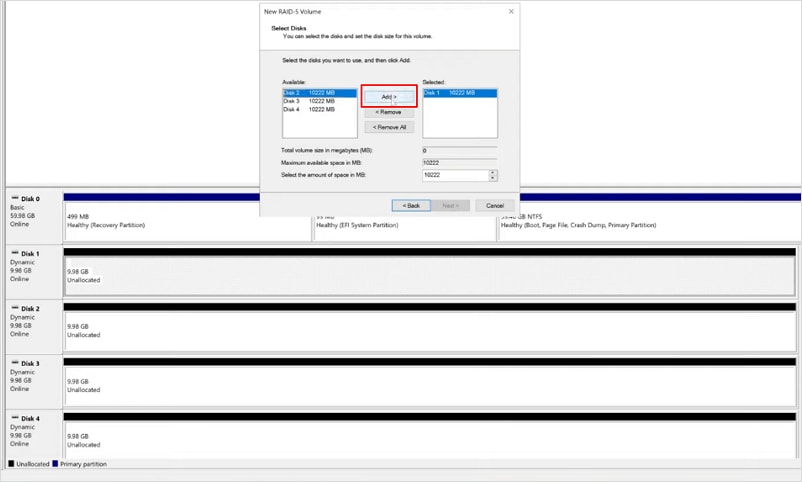 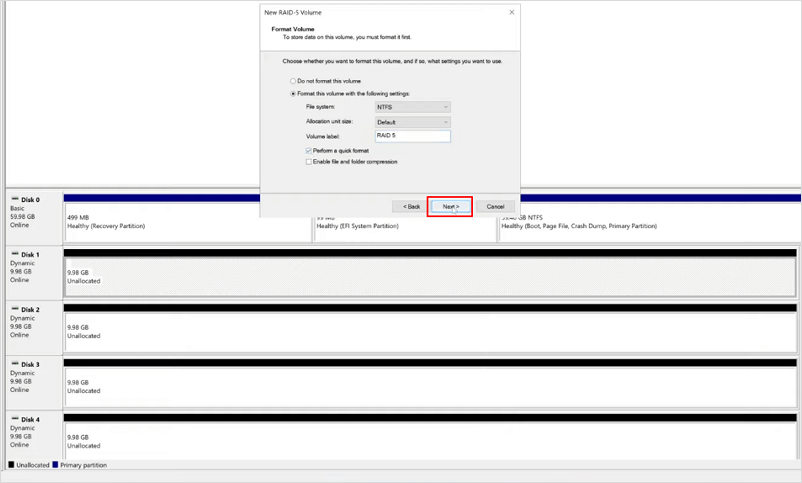 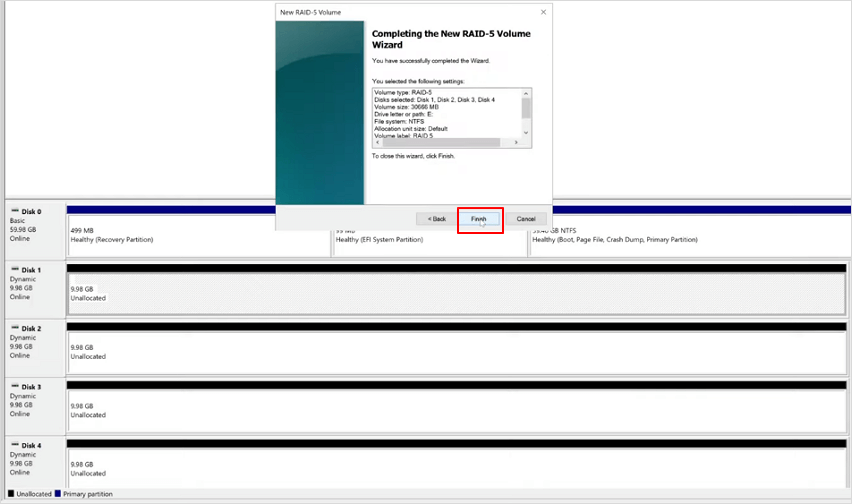 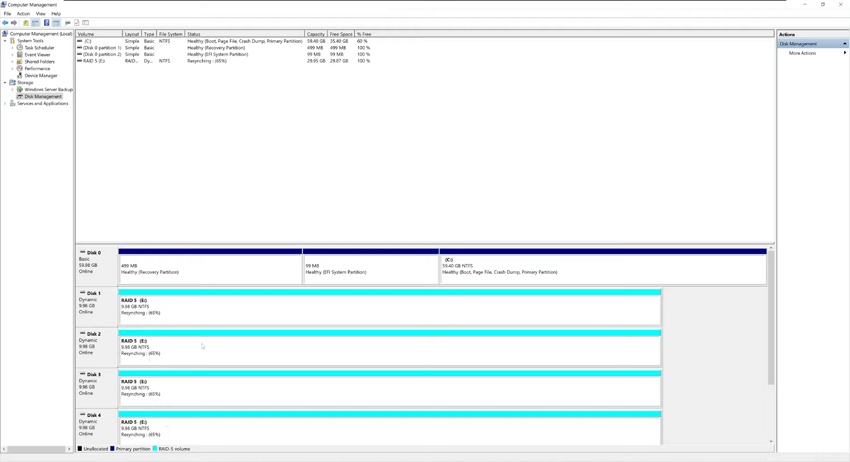 Part 3. How to Rebuild a Failed Raid 5 Array [Without Data Loss]?

There is a very slim chance that your RAID 5 storage system will fail because it is created to store precious data without failing. And if it fails, luckily, there is an option to recover the lost data (also known as Regeneration).

We are going to teach you to rebuild your RAID 5 in the case of disk failure. You need to understand that you haven't lost your data as your SSD or HDD became out of order. You can still retrieve it as the RAID 5 array duplicates it (also known as Redundancy) in several drives.

Tips before Rebuilding the RAID 5 Array

If you want to rebuild the RAID 5, such as adding new drives to replace the faulty ones, then you must perform the following steps:

Steps to Rebuild the RAID 5 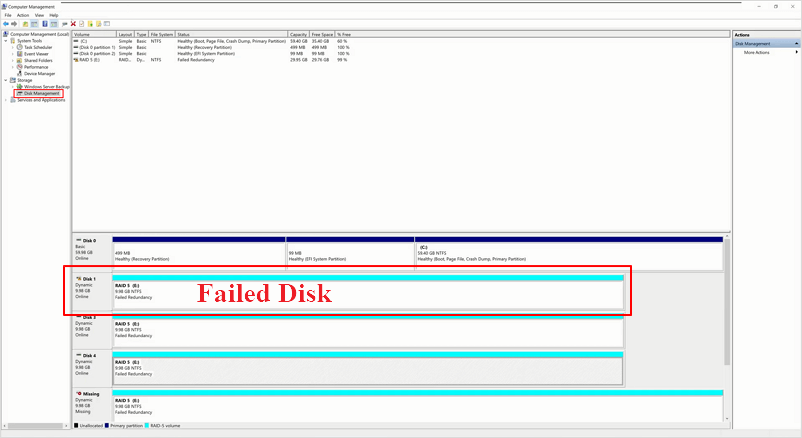 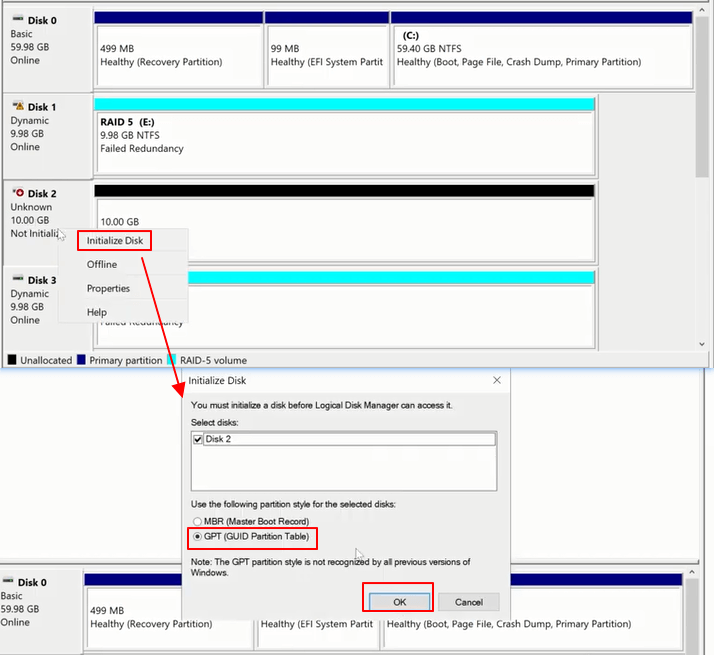 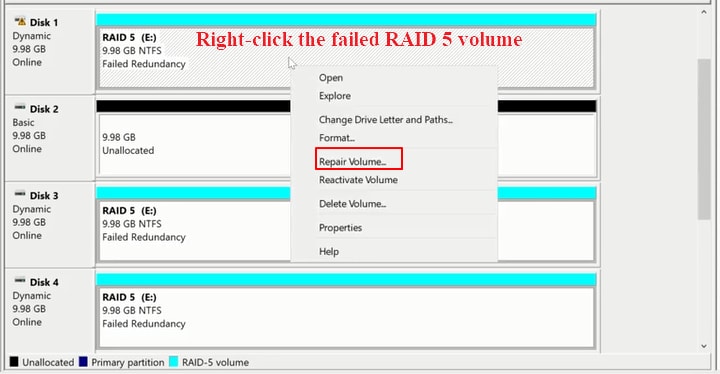 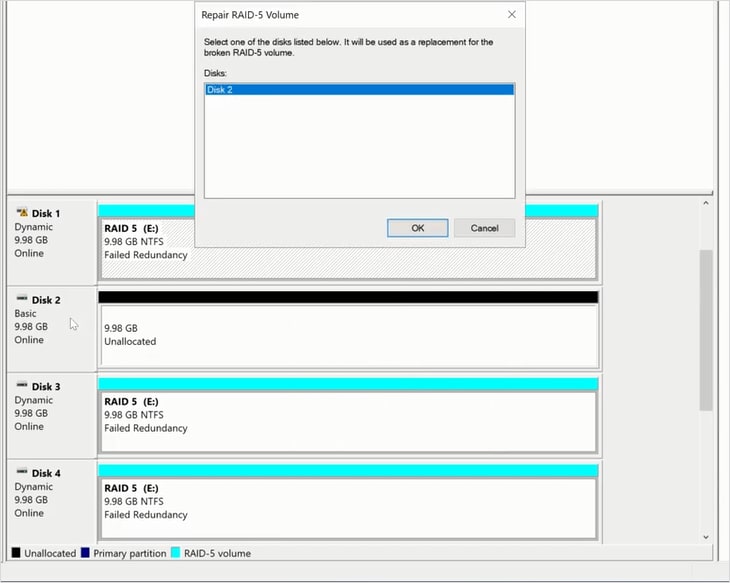 What to Do If You Lose Data after Rebuilding?

You will not lose your data after rebuilding, but if you want to perform the rebuilding task ideally, you should make one or two backups of your data before reconstructing the RAID 5. On the other hand, if more disks have failed and you have suffered a severe data loss, then consider using the RAID data recovery software, such as Wondershare Recoverit, to recover your data. Before this, please read an article on "Raid 5 Data Recovery" as you might recover your data more easily, saving your precious time.

Part 4. How to Upgrade RAID 5 Drives?

In most of cases the four storage disks are not enough to store the data, especially when you are a big company or institute. We often need to replace our slow Hard Disk Drives (HDDs) with fast and efficient Solid State Disks (SSDs) as they have more fault tolerance than the old storage media. Sometimes we need to upgrade the partitioning to 64-bit or increase the overall storage size. This is where upgrading plays an important role in improving your RAID 5 storage system.

For changing the partition sizes of your RAID 5 disks, you can use partition management tool like AOMEI Partition Assistant and follow the steps below: 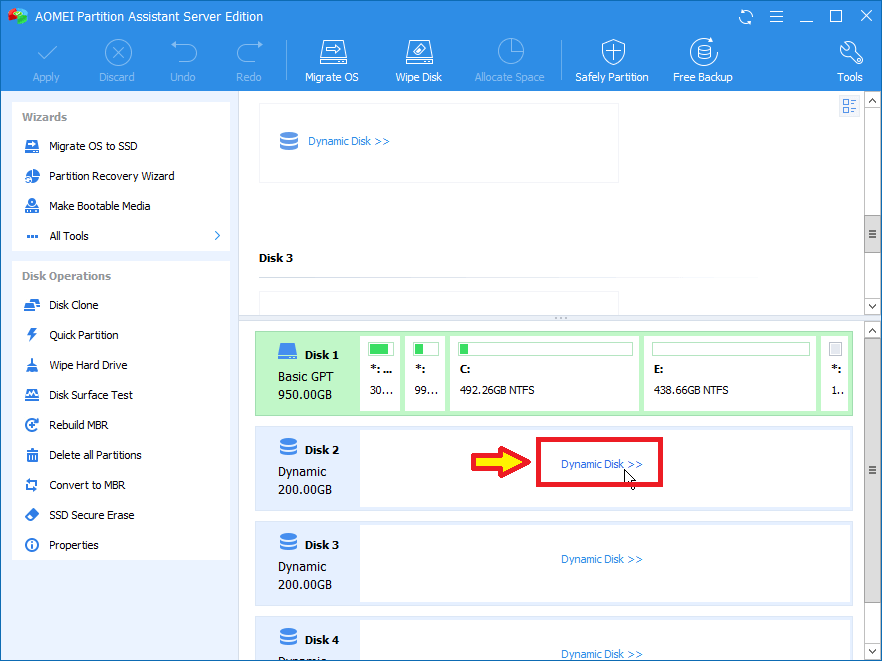 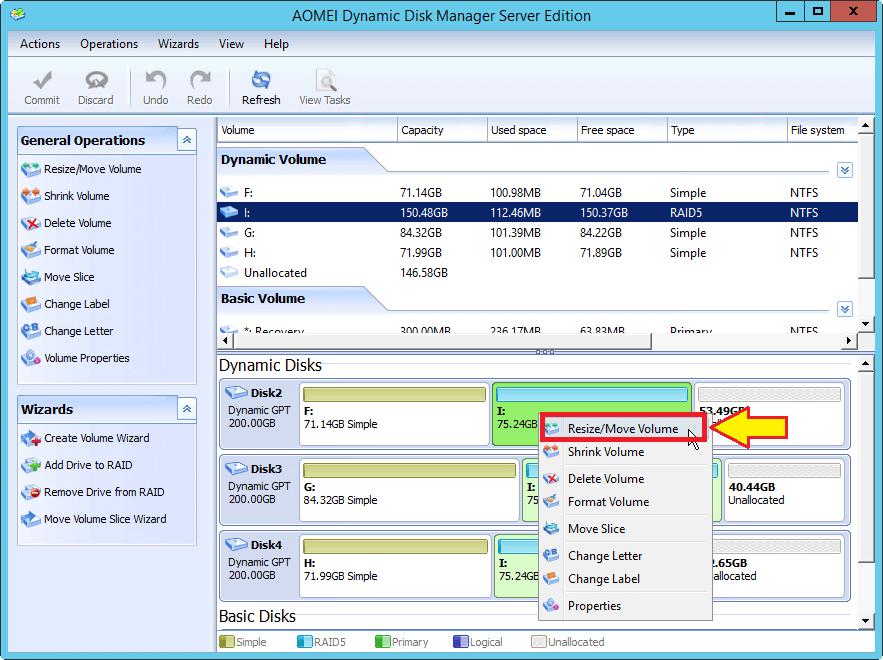 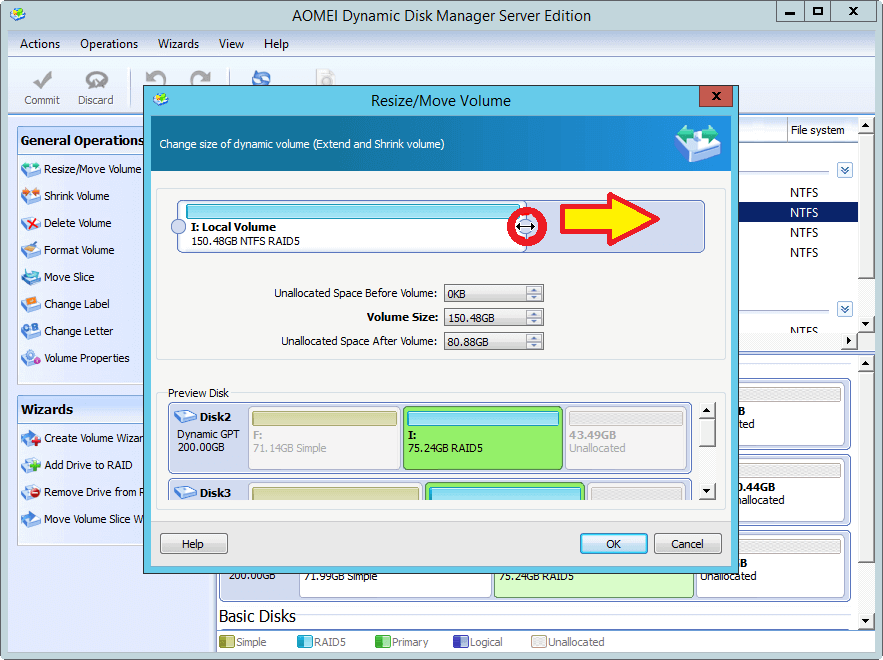 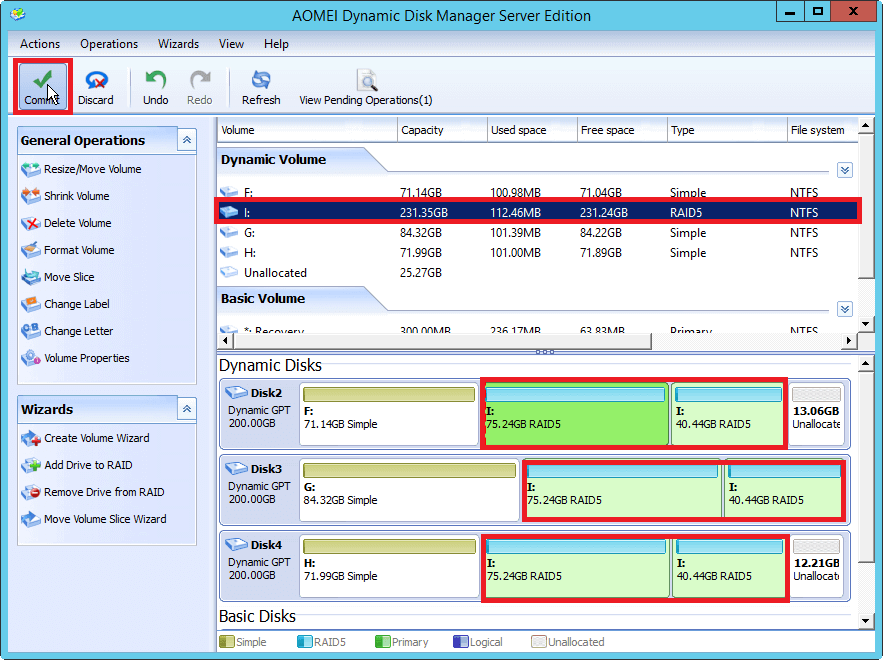 If your RAID 5 array is running out of storage and you want to upgrade it by adding a new large hard disk, then stick to this guideline: 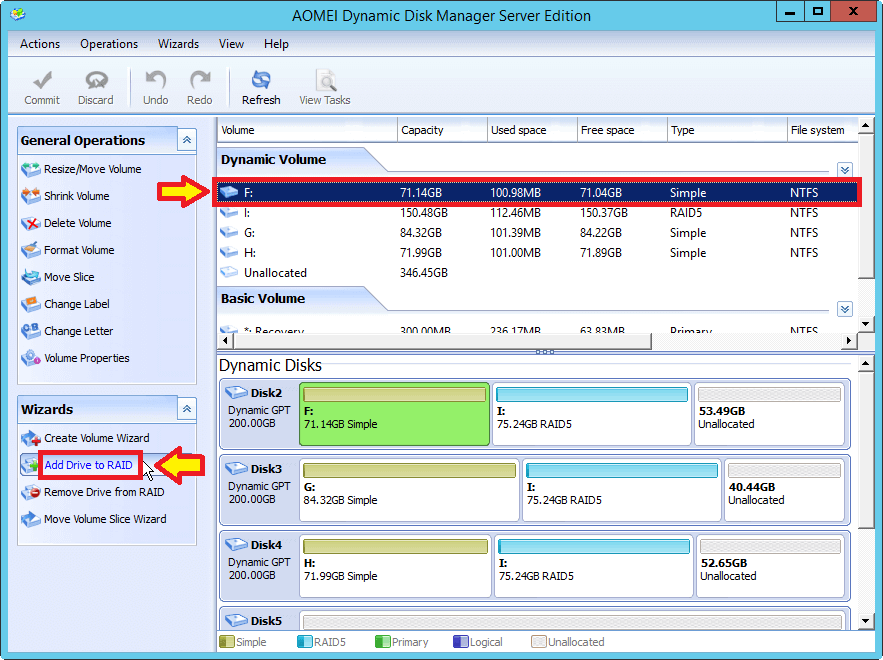 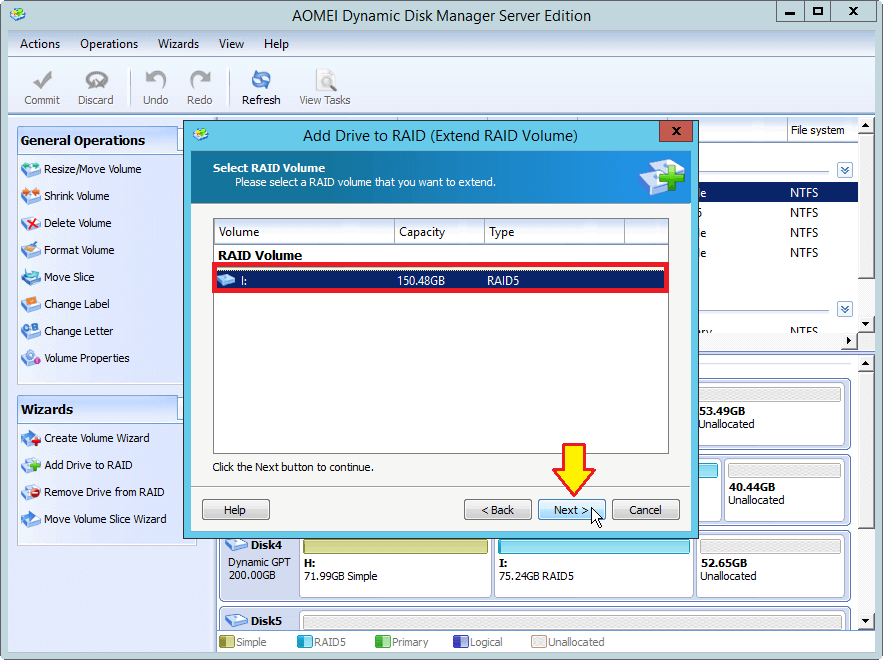 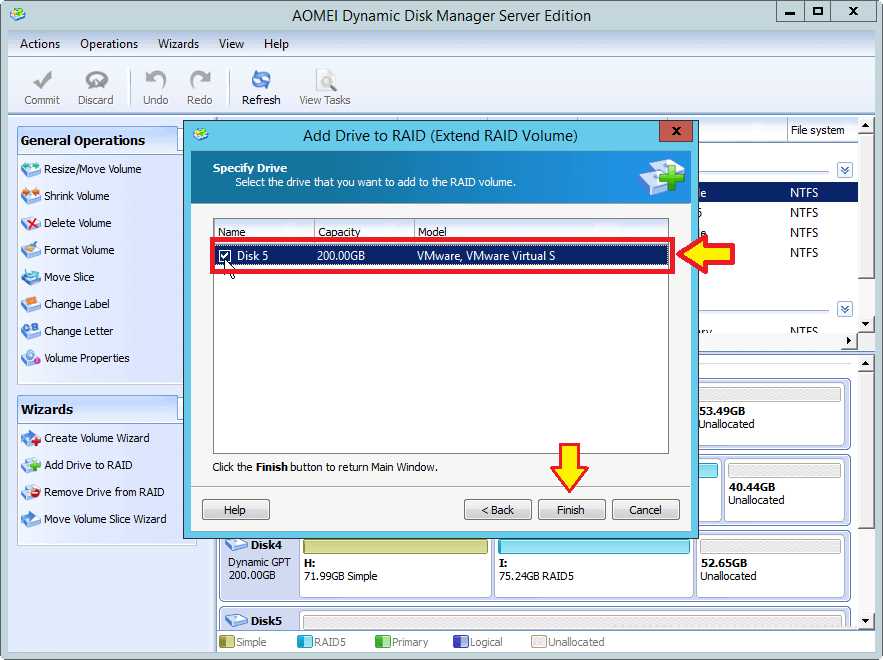 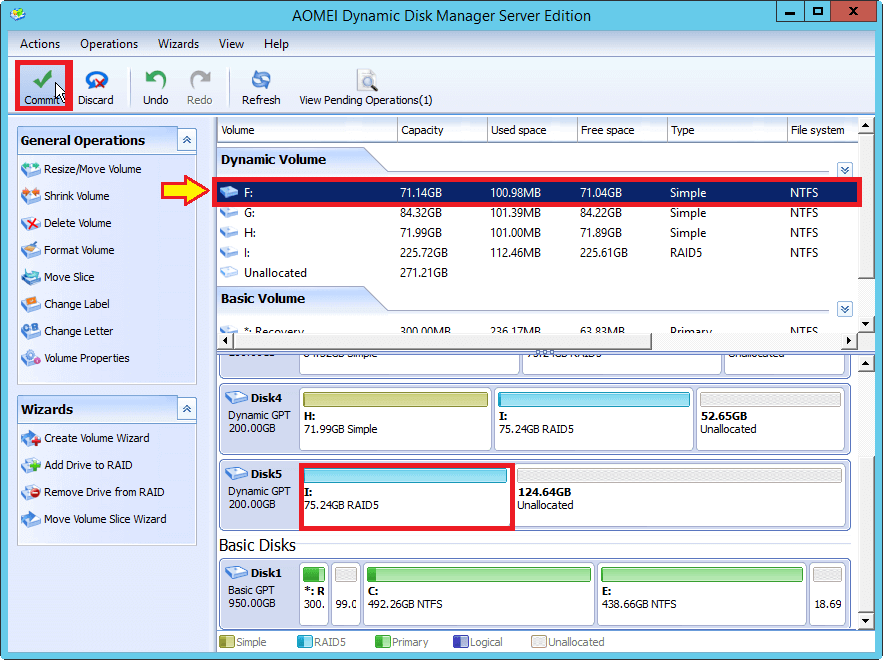 SHR stands for Synology Hybrid Raid, an automated Raid Management System developed by Synology. It is similar to RAID 5. RAID 5 allows you to have one hard drive fail to maintain its integrity. SHR also maintains data integrity by using the same principle.

RAID 5 is straightforward and easy to manage. SHR is a Linux RAID Management System, and storage deployment is fast and easy. In addition, this storage system has an optimized capacity and performance, and it is claimed that SHR outperforms the traditional RAID arrays.

This article is a super and easy guideline on RAID 5. It will not only clear your concepts but also teach you to create your own RAID 5 storage array using your computer system. For you, we have included the methods of rebuilding your RAID 5 in case of a disk failure. You are also provided with how to upgrade the existing RAID 5 as well.