Here are the top 8 Free NTFS for Mac Software with reviews, and comparisons.

No worries, Wondershare Recoverit can get back your lost files within 3 steps. The professional yet easy-to-use data recovery software is totally reliable and 100% safe.)

Microsoft established the NTFS file system, which is a default file system on Windows. However, macOS does not fully support it. A file on an NTFS disc cannot be directly detected (read, written to, or edited) by the Mac operating system. It can be made available with an NTFS for Mac software application. Below are some helpful free NTFS for Mac tools.

The 8 best NTFS drivers for Mac that can provide you complete read and write access to NTFS devices on a Mac are introduced, reviewed, and compared in this article.

We built a virtual machine with macOS 10.15. Catalina and the other 6 clones to ensure that all apps were installed and run in the same system environment before testing and comparing the top 8 free NTFS for Mac software.

The drive was then successfully mounted in read-write mode after we attached an NTFS drive and transferred 500+ files containing various file types into the NTFS drive. Then, to see if the NTFS write and read features were supported, we repeated a few of the same actions to the NTFS drive.

Out of the test process, we picked the 8 best free NTFS for Mac software.

Among them, 4 NTFS for Mac software are totally free:

On the other hand, there are 4 NTFS drives for Mac with free trials available:

Comparison Chart of the Top 8 Free NTFS for Mac Software

In this article, both free and free-trial Microsoft NTFS for Mac software is compared. You can read NTFS drives on Mac and enable Mac NTFS writing functionality with a third-party NTFS driver, which will fix the read-only issue with your Mac external hard drive.

You may choose your ideal NTFS for Mac software with the help of the comparison table. 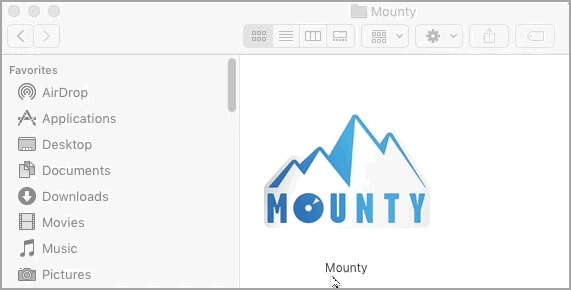 You may download Mounty for NTFS free using Homebrew or the DMG installer. The program was created to transfer data across the Windows and macOS operating systems. Additionally, Mounty for NTFS uses the macOS system and doesn't install any external drivers on your disk.

Despite being free and easy to use, Mounty for NTFS carries the risk of data loss, disk failure, and poor transfer rates. In any case, it provides enough free software.

How to use Mounty NTFS for Mac:

Step 2. After downloading the software, you can manage the contents of the associated drive using the Finder windows.

The Mounty NTFS for Mac software was reviewed and received positive and bad feedback from various users. 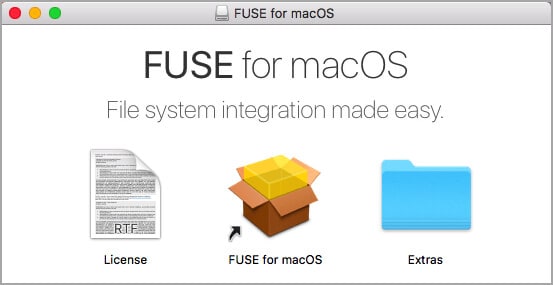 A third-party universal file system enables you to expand Mac's file management capabilities. Installing this free Mac NTFS driver software adds a compatibility layer to macOS, enabling users to access NTFS files using any fully functional file system built on top of it. Mounting NTFS partitions in read-write mode may be a little more difficult. However, FUSE for macOS is a wonderful choice if you are familiar with the command line and require a completely free solution.

Obtainable in a variety of languages

How To Use FUSE for macOS:

Step 1. Download the most recent version of FUSE, open the.dmg file, and run the installation by clicking on the FUSE for macOS.pkg file.

Step 2. Restart your computer after the program has been installed, then connect the Windows NTFS drive to the Mac for read-write access.

Many comments indicate some compatibility problems with this free NTFS for Mac software. In addition, command line experience in technology is necessary. It is advised for developers who are well aware of the hazards and advantages. However, few put positive comments. 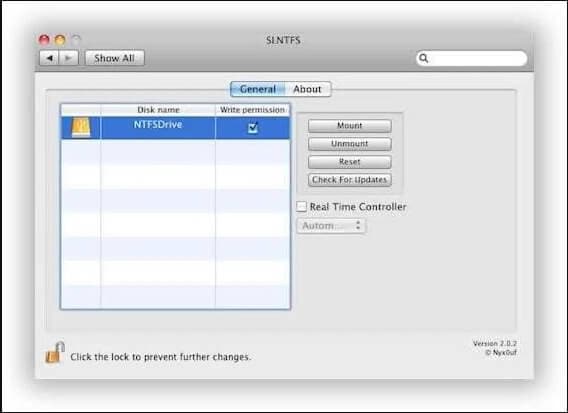 Failure while writing to external HDDs with NTFS

Step 1. When the preference is opened, the window will appear.

Step 2: Click the option to Activate or Disable writing on a volume. If you haven't already, you'll be prompted for your password.

Step 3: If the button is still unchecked after that, writing to this disk using the Apple driver is not allowed. The disk will then vanish and reappear in the table. When a disk is mounted but writing isn't enabled on it, you can enable a daemon (a background program) that will prompt you for permission to enable writing on the disk.

The few users suggested that the SL-NTFS has unreliable performance and poor compatibility. You could give it a try for one time only. 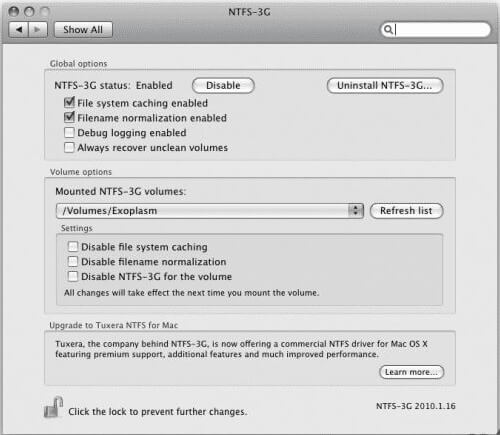 NTFS-3G is a cross-platform and open-source implementation of the Windows NTFS disks. As it uses the FUSE file system interface, You can use the application without modification on several operating systems, including macOS. Additionally, NTFS-3G supports all Mac writing procedures for NTFS files. Transparent compression and system-level encryption are also supported.

Has not received an upgrade to accommodate macOS Big Sur

Not compatible with the Apple Silicon M1 Mac and macOS 12

Difficult to install and utilize

Depending on a command line

How To Use NTFS-3G macOS:

Step 2. In the search field, type "NTFS" and then click Mark for Installation. Accept the dependencies for NTFS config, then press Apply to begin the installation.

Step 3. You can now read-write NTFS drives on your Mac after the installation has been completed.

Disregarding its benefit of being free, NTFS-3G is noted for its poor usability and performance. Unlike the others, the installation process of NTFS-3G is complex because it is a code source and requires a substantial understanding of command lines. Here are some more user reviews. 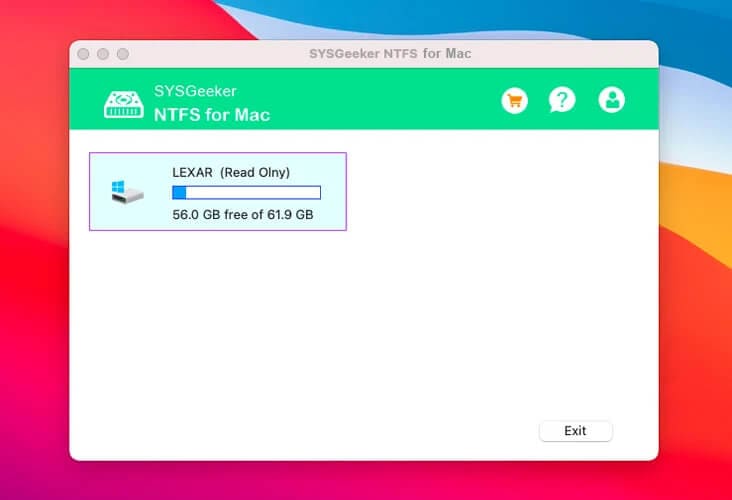 The SYSGeeker NTFS for Mac software is an easy-to-use program that automatically recognizes NFTS formatted volumes and re-mounts write-protected NTFS volumes under macOS in read-write mode. It successfully bridges the gap between Windows and Mac caused by their different file systems. This software enables infinite read/write functionality for all external hard drive types, including SSD drives, and features an easy-to-use user interface.

All NTFS versions are supported

GUI-based and straightforward to use

It is compatible with Monterey to macOS Sierra versions

No information is damaged or lost during the transfer

A free version is available, but it has a short trial duration

How To Use SYSGeeker NTFS for Mac:

Step 2. Place your NTFS drive into your Mac.

Step 3. When your Mac detects the NTFS drive, right-click on the Drive icon and select Mount as writable. Then it switches to read-write mode, allowing you to drop files randomly.

Here are the reviews of different users. 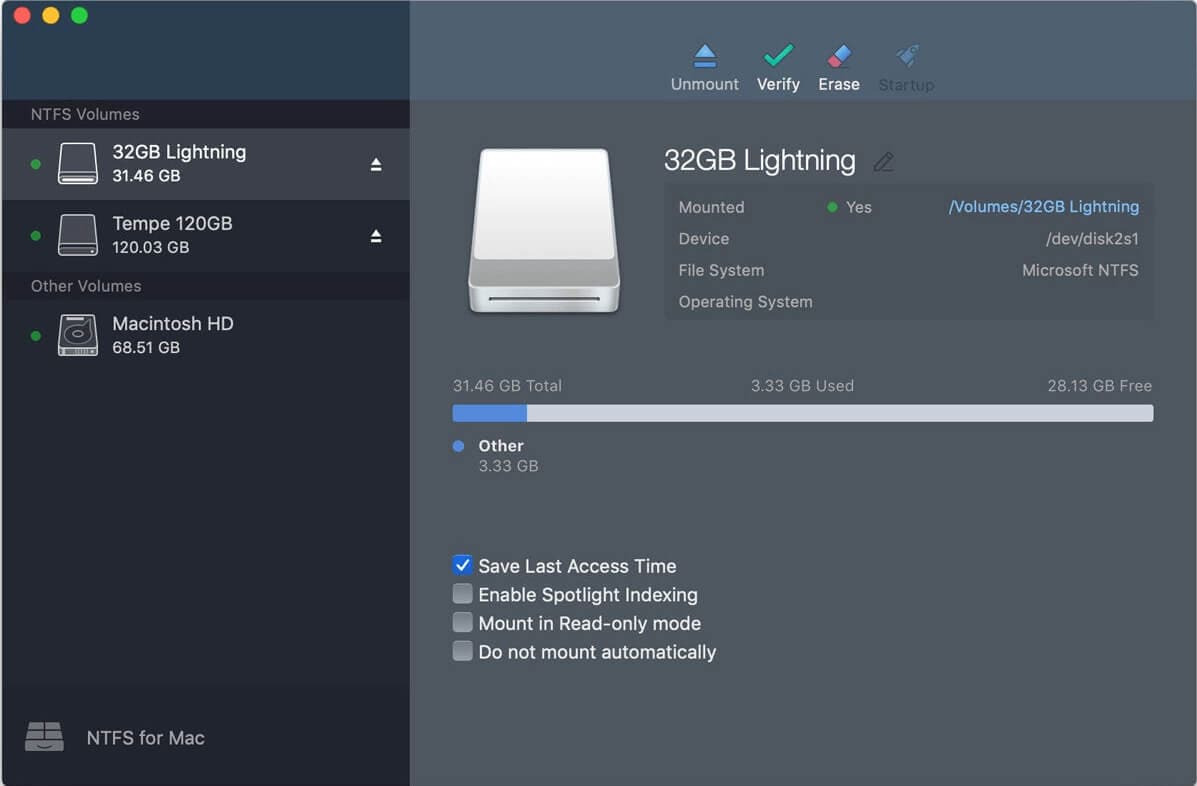 The Paragon NTFS for Mac enables macOS to write on hard disks, SSDs, USB thumb drives, and other devices with Windows NTFS formatting. It gives Mac users complete read-and-write access to Microsoft NTFS. The software is built on a unique UFSD technology that offers NTFS partitions as fast as native macOS.

It has a 10-day free trial period

It has a helpful user interface

Cost for each upgrade

Users' login credentials are being lost

How To Use Paragon NTFS for Mac:

Step 1. Install Paragon NTFS for Mac after downloading it.

Step 2. Double-click on the dmg after finding the file.

Step 3. Follow the on-screen instructions after installing NTFS for Mac.

Step 4. Start editing your NTFS drives after restarting your Mac.

Users can write to, edit, copy, move, and delete files on Microsoft NTFS from their Mac using Paragon's Microsoft NTFS for Mac software. However, if you're just testing out a free product, it's not advisable to use it. After a 10-day trial, you almost can't uninstall it from your Mac. Here are also some reviews from other users. 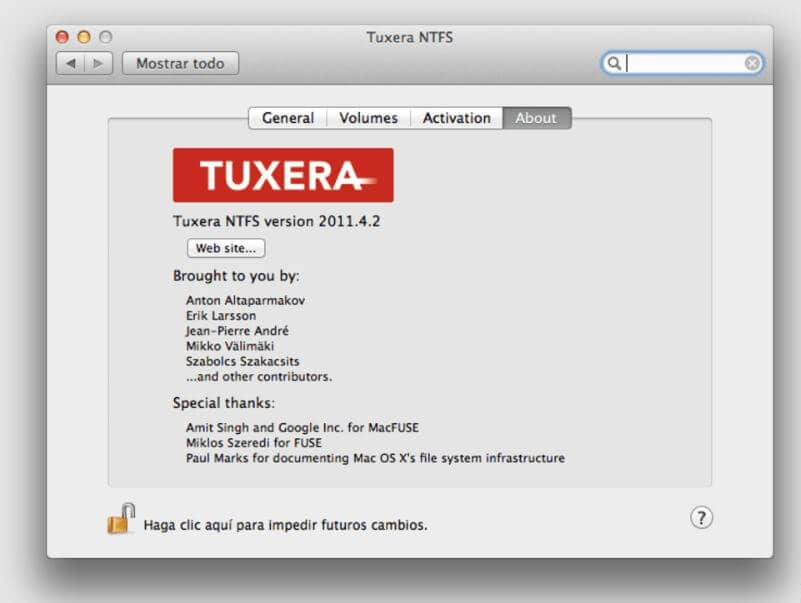 Built on the foundation of NTFS-3G, Tuxera NTFS for Mac is a commercial Microsoft NTFS implementation for macOS. The program offers advanced caching technology to provide quick file transfers between Mac and Windows NTFS. The program also provides a maintenance option that allows users to inspect and fix issues on the attached disk.

Compatible from MacOSX 10.4 to macOS 11 and to the Apple Silicon M1 Mac

How To Use Tuxera NTFS for Mac:

Step 3. To install the Tuxera NTFS software on your Mac, click on the Open button.

Step 4. When the Tuxera package is prepared to operate, click Continue and choose the trial version.

Step 5. You can now make changes by simply restarting your Mac, connecting your NTFS driver, and opening the NTFS drive in Finder.

Tuxera NTFS for Mac offers a generous 15-day trial period that is partially free before you must pay for a lifetime license key. To be safe, you should always make a backup of your files. Here are other reviews from various users. 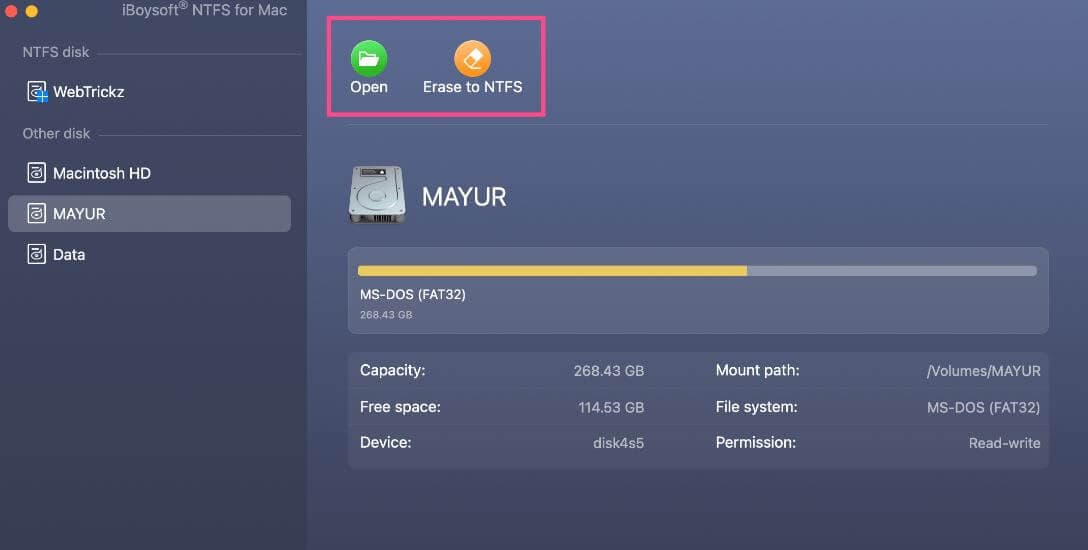 It removes the NTFS volume or data cleanup

How To Use iBoysoft NTFS for Mac:

Step 1. Download, install, and activate NTFS for Mac for free.

Step 3. All NTFS partitions will be automatically mounted in read-write mode by iBoysoft NTFS for Mac.

Almost users said that the best NTFS driver for Mac is iBoysoft NTFS. It is due to its user-friendly design, plug-and-play functionality, free trial version, and technical assistance. Here are other reviews from other users.

I hope we have helped you choose the best NTFS software for your Mac devices. Additionally, with the aid of Recoverit data recovery, you may effectively recover deleted or lost data from NTFS drives on both Windows and Mac computer. Visit our website for more information!