What Is NTFS File System

Presenting the meaning and structure of the NTFS File System, as well as its advantages & disadvantages.

What Is NTFS File System - Definition

New Technology File System or NT File System (NTFS) is a customized journaling file system created by Microsoft in 1993. It became the default file system for the Windows NT family with Windows NT 3.1. In addition to being supported by Linux and BSD, it replaced the File Allocation Table (FAT) as the primary file system on Windows. The Windows NT operating system (OS) uses it as the file system for storing and retrieving files from hard disk drives (HDDs) and solid-state drives (SSDs).

The Windows operating system uses three file systems to store data on a storage device: NTFS, FAT32, and exFAT. Some of you might be interested in learning more about the distinctions between the three or may be unsure which one to use for your hard drive or USB format. After learning the brief of the NTFS, let's have a fundamental understanding of FAT32 and exFAT. 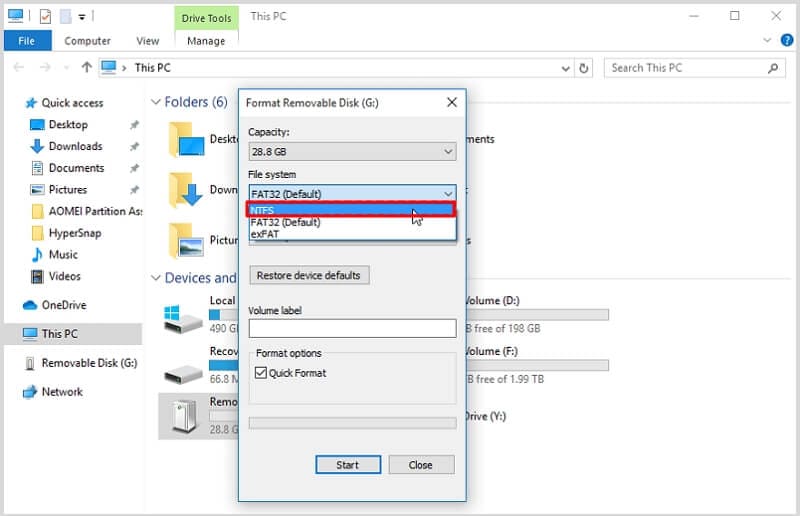 So, NTFS, FAT32 or exFAT, which is better? Here is a comparison of NTFS, FAT32, and exFAT in a table. You can read on to discover the differences:

How to Find Out If a Drive Is Formatted as NTFS

There are few techniques to determine whether a hard drive has been formatted with NTFS or another file system is being used.

Utilizing disk management is the first and possibly most straightforward method to view the status of one or more disks. The volume and other information about the drive are listed right here, along with the file system. 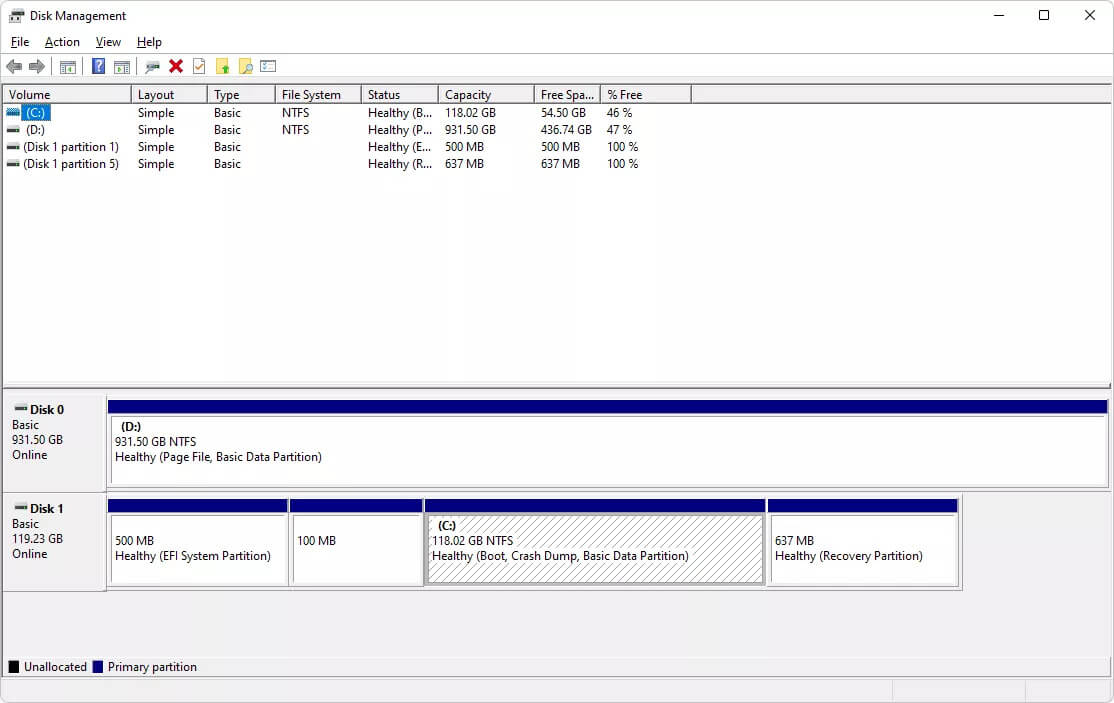 By right-clicking or tapping and holding the hard drive in File Explorer, you may check to determine if it was formatted with the NTFS file system. Select Properties from the drop-down menu after that. Examine the information under File system on the General tab. File system: NTFS will appear if the drive is NTFS. 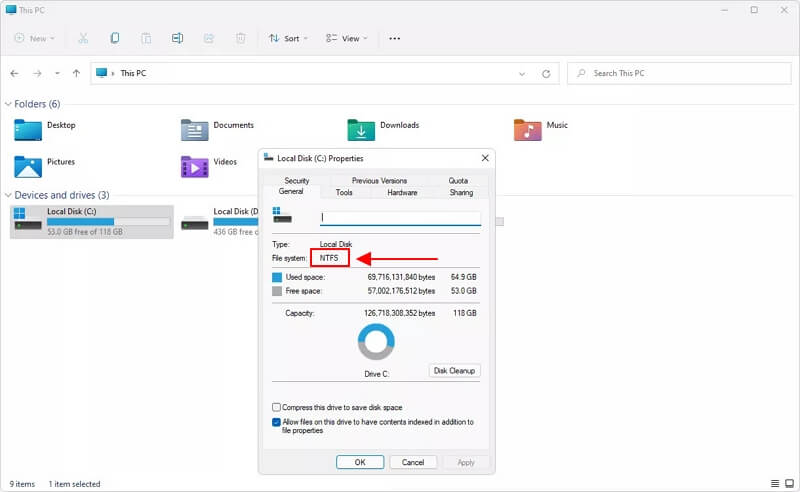 The command-line interface is yet another method to check which file system a hard drive operates. To display different information about the C: drive, including its file system, open a Command Prompt (in some Windows versions, this may require an elevated Command Prompt) or Windows Terminal and type the following: 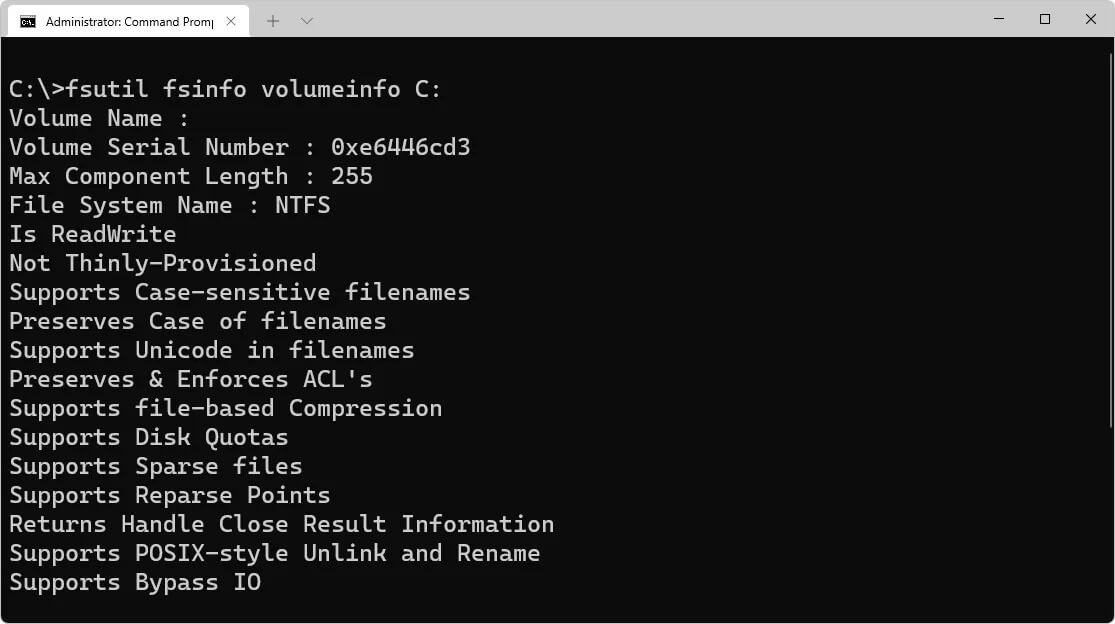 Use the volume letter of the drive in place of C to check a different hard drive. Get an on-screen print-out using the fsutil fsinfo drives command if you are unsure of the drive letter.

NTFS consists of several components, such as

The boot sector of an NTFS-formatted drive is described in the following table. The format program sets aside the first 16 sectors of an NTFS when formatting it for the boot sector and the bootstrap code. 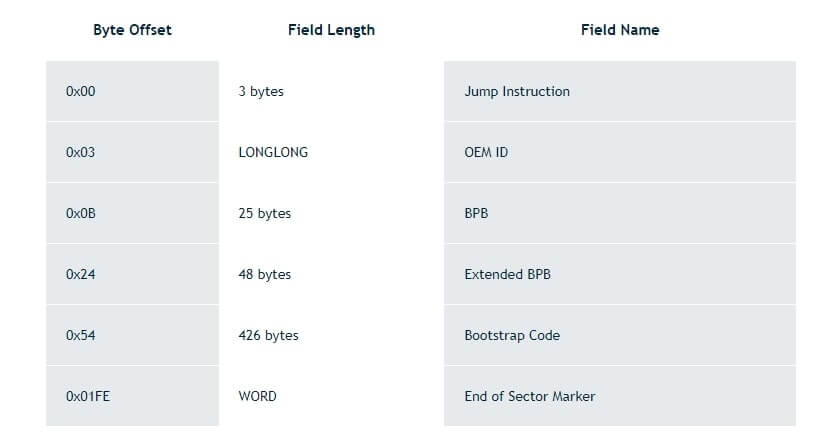 The data fields that follow the BPB on NTFS disks create an expanded BPB. Ntldr (the NT loader program) can locate the master file table (MFT) on startup, thanks to the information in these fields. NTFS volumes do not have a designated sector where the MFT is placed.

Because of this, if a faulty sector is present in the MFT's usual place, it can be shifted. Windows thinks the drive has not been formatted if the data is corrupted or the MFT cannot be found. 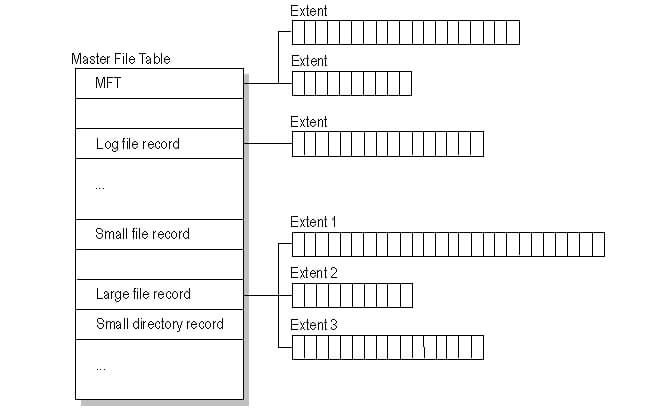 The log file, which is utilized for file recovery, is the third record of the MFT. Each file entry is given a specific space in the master file table. A file's attributes are written to the MFT's designated space. Small files and directories can fit totally inside the master file table record if they are 1500 bytes or less in size.

How Does NTFS Work?

The entire physical hard disk space is partitioned when a hard drive is formatted. The operating system records all the files stored by that operating system within each partition. Then, each file is kept on the hard drive in a single or several clusters that are all the same size. Windows NT offers a recommended default cluster size for any given drive size. When utilizing NTFS, cluster sizes vary from 512 bytes to 64 kilobytes.

It is anticipated that a system user will choose to boost performance (fewer disk accesses) at the expense of a small amount of wasted space. Thus, the larger the default cluster size for NTFS is, the larger the hard disk.

Highlights of NTFS File System - When Should You Use NTFS

The fact that NTFS supports file permissions and encryption is one way in which it differs from the latter. NTFS has the following notable key features:

An administrator establishes these limits to limit how much disk space a user can occupy. It is mainly employed to regulate the amount of accessible shared space, typically on a network drive. You can monitor the amount of free hard drive space without employing disk use quotas.

Individual files and folders can be secured since EFS offers file-level encryption. Full-disk encryption, which encrypts the entire drive, differs from this capability. 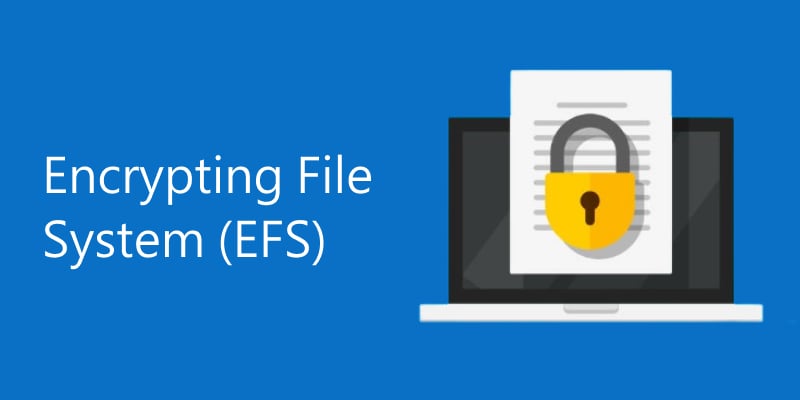 It offers a technique to log or journal system changes before they are written to the file system. This feature enables the file system to return to earlier functional states in the event of failure because the new changes have not yet been committed.

Windows itself utilizes an NTFS feature to keep copies of your data and online backup service programs and other backup software tools to back up files that are now being used.

It is a new feature included in this file system. As a result, software developers might create apps that are either entirely successful or ultimately unsuccessful. Programs that take advantage of this avoid the risk of making some modifications that work well and some that don't.

Hard links, sparse files, and reparse points are some of the additional features offered by NTFS.

Access control for mission-critical data is made possible by NTFS's ability to provide permissions to files and folders.

Administrators can track files that have been added, removed, or altered, thanks to the MFT's logging and auditing of the drive's data.

Because NTFS keeps the consistency of the file system, data and files can be promptly restored in the event of a system failure or malfunction. It has an MFT mirror file that the system can turn to if the original MFT becomes corrupt because it is a fault-tolerant system.

NTFS has advantages over other file systems of a similar nature, such as File Allocation Table 32 (FAT32). The two file systems are utilized in various computing scenarios, from personal to business. NTFS is the most well-known of the two due to its association with Windows.

Find out more on the article “NTFS vs FAT32” about the distinctions between these two credible file systems and how they are currently employed in businesses.

Drawbacks of NTFS - When Should You Choose the NTFS Alternatives 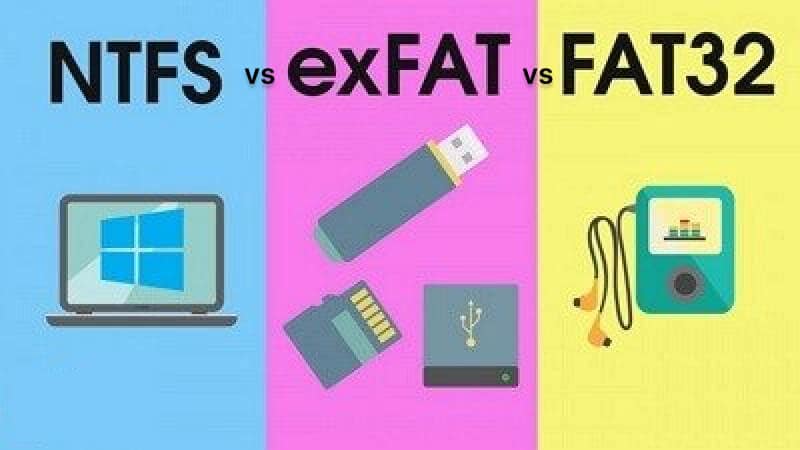 The main drawback of NTFS is that outdated equipment cannot use its cutting-edge features. Because NTFS was created to work with a Windows operating system, it isn't necessarily compatible with Mac or Android devices. For instance:

In terms of security, partition size, file rights, and other factors, NTFS is superior to FAT32. But with the NTFS drawbacks, you must consider converting to FAT32. Compared to the NTFS file system, FAT32 is more compatible with old operating systems and other external storage devices. Good thing that there are various ways to convert NTFS to FAT32 without losing data.

On the other hand, exFAT is a file system you can use if your storage devices are not NTFS compatible and you don't want to be constrained by FAT32. exFAT conversion requires formatting the partition, which makes it different from FAT and NTFS conversion. So, you can format your storage drive from NTFS to the exFAT file system.

Since macOS is such an exclusive operating system, macOS does not entirely support the Linux and Microsoft NTFS file systems. But because Windows continues to dominate the market, many storage devices try to drive out with the NTFS file system.

The NTFS-formatted disk won't let you write anything by default on macOS. You will discover different methods with step-by-step instructions in our article how to use NTFS drives in macOS and how to mount NTFS on Linux.

Have you recently experienced file loss on an NTFS hard drive? If not, you are lucky. But if data loss is your main problem, you may need to use a recovery tool to be able to retrieve your lost files from NTFS disk.

If the NTFS.sys file is missing or corrupted, your computer will encounter an NTFS.sys blue screen error and the missing boot.ini file, which usually happens. Thus, knowing how to fix NTFS.sys missing or corrupted errors is essential. Don’t worry. There’s a solution to fix missing and corrupted errors for you. You can do it either with the help of a third-party app or by just checking your installed drivers.

Allow yourself to no longer be terrified by the NTFS FILE BSOD Windows error since you can now solve it. But before you fix the NTFS file system error in your Windows device, make sure you have checked what causes the issue.

If you want to learn more about the NTFS file system, this video will introduce you to the struction and composition of an NTFS file record.

Do you think NTFS is a great file system for your devices? Well, go ahead and format the hard drive partition using NTFS or convert the FAT32/exFAT device to NTFS or vise-versa now. Wondershare Recoverit has a lot of guides and tutorials that made these complex procedures easier for everyone.