The MacOS 13 Ventura is a new update; this looks like everything a geek has been waiting for. Are you that geek? Just note that there might be bugs when implementing such a significant change. Still, after months of beta testing, the testers should be able to discover flaws with MacOS 13 and provide a more stable and efficient user experience.

Apple has shown off the new macOS, and the developer beta is available now on the Apple developer website. - it was released on June 6. In addition, public beta testers will be able to sign up as developers to try out the beta for the public beta, which according to the tech lords, will be available in the fall.

What Is New in MacOS 13 Ventura? 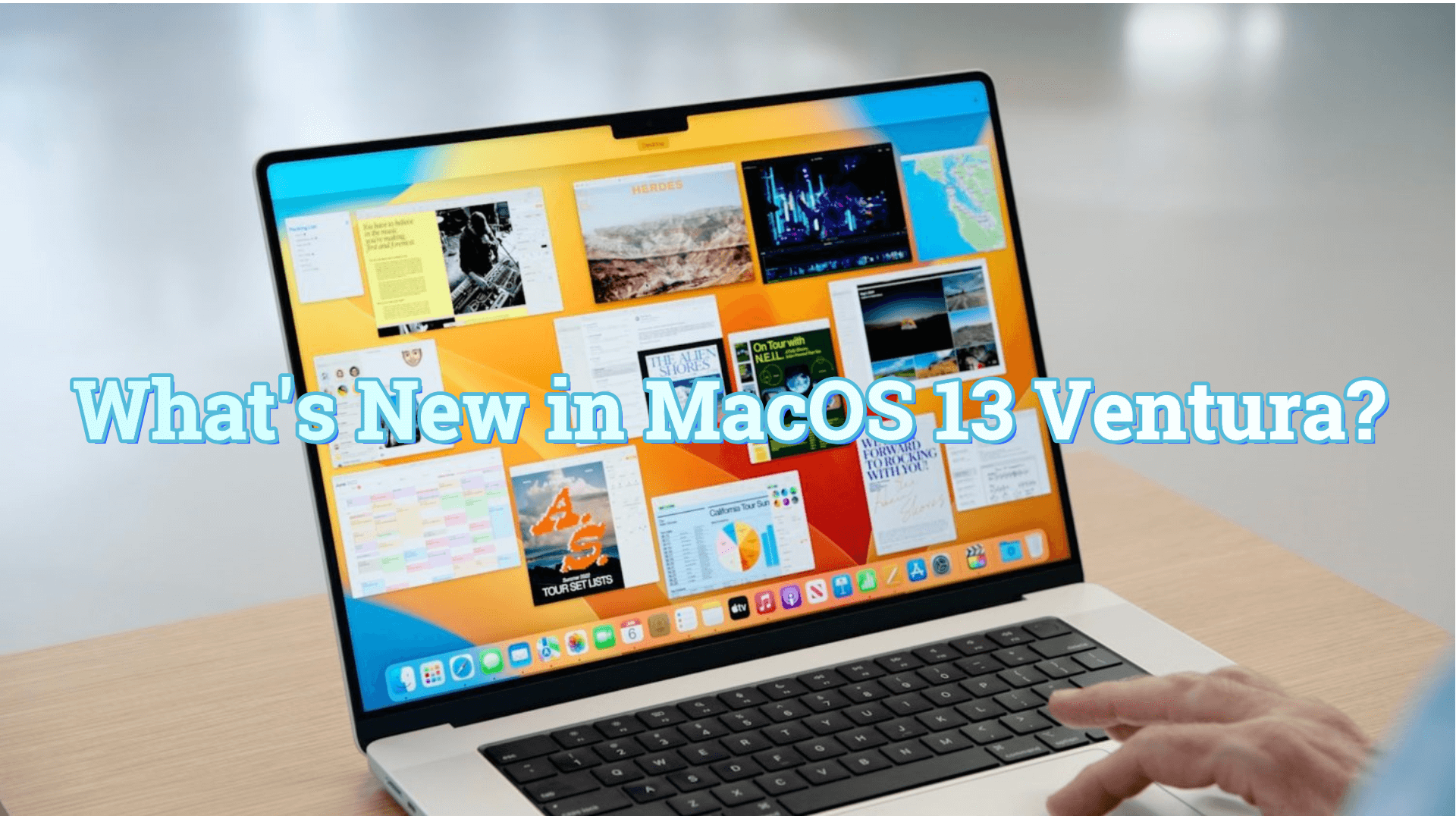 There are so many new features and more to expect in updates of the OS. It reads like quite the upgrade and all the more worth spending. The new and improved features include:

Here is an excellent feature for the workaholics; it allows the user to center an application without going full screen and ensures fast access to applications and windows with just a click. Interestingly, you also get to group apps together. 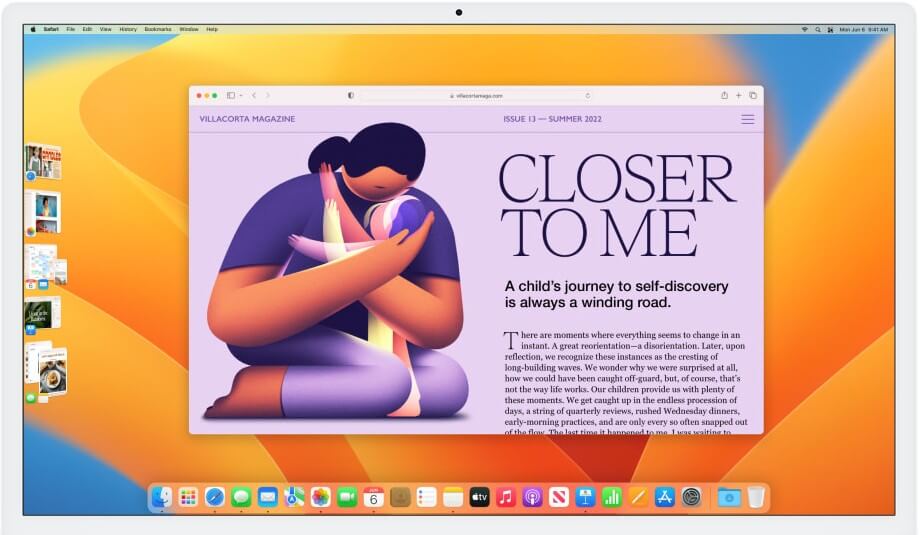 Suppose you're used to speaking with other Apple users (blue bubbles) via iMessage. In that case, you'll be able to modify and unsend messages 15 minutes after they've been sent and retrieve deleted communications up to 30 days after they've been sent. Within a chat window, you can also send collaborative invites to entire groups for works in Pages, shared Apple Notes, and more, as well as receive updates on those collaborations.

SharePlay also works with Messages, allowing you to sync shared activities like listening to music or viewing movies from your Mac to your iPhone or iPad via iMessage. Finally, the option to designate messages as unread has arrived after so many years. 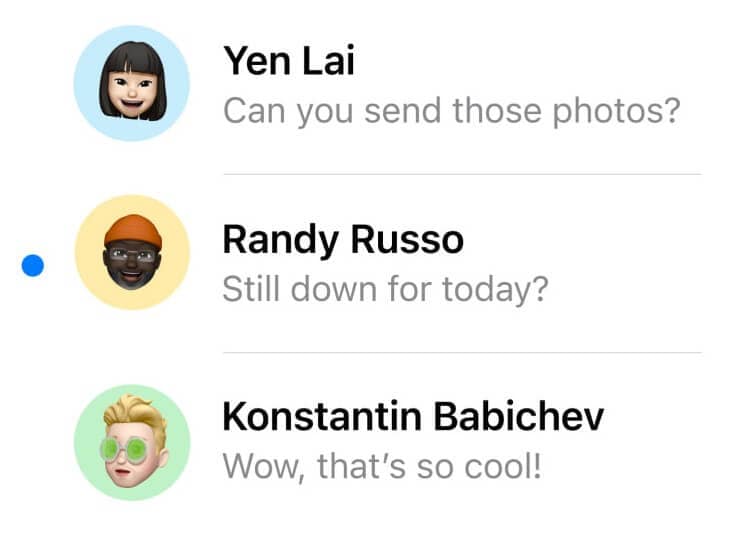 From smart search corrections and suggestions, the new mail features make it easier to schedule emails and follow up with the recipient. Get notifications when you omit something and undo a sent email when it matters.

There is no need for picture-sharing apps anymore; you can have an iCloud photo library to share with your family, relive memories and even start collections, making it more fun. In addition, you can set up rules and gain access to smart sharing suggestions. 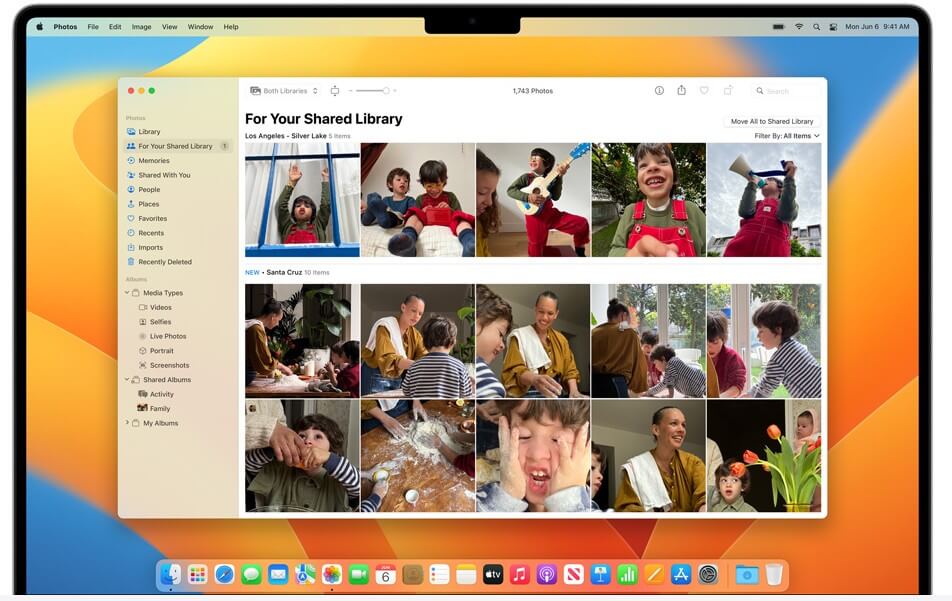 This feature makes searching fun because you can search for everything and anything. With the spotlight, you can also perform quick actions such as a Shazam and use shortcuts without interrupting your main work. Preview files with a Quick look using the space bar. 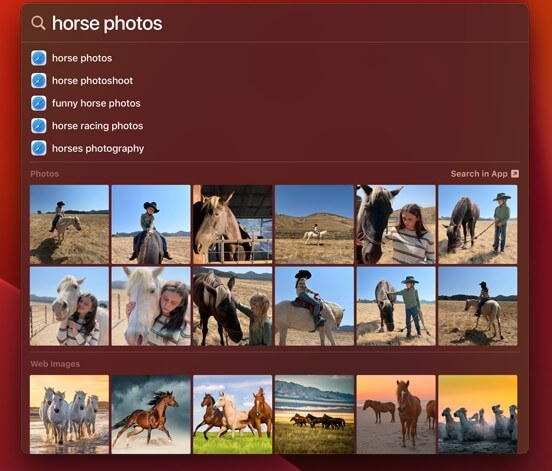 Here is my favorite feature because what is the tech is being able to use your iPhone camera as your Mac webcam. Not just that, use the microphone, portrait mode, studio lights, and video conference with a desk view. Talk about an upgrade in having work laptops. There is no need to spend extra on a camcorder or microphone to integrate these features from your phone. 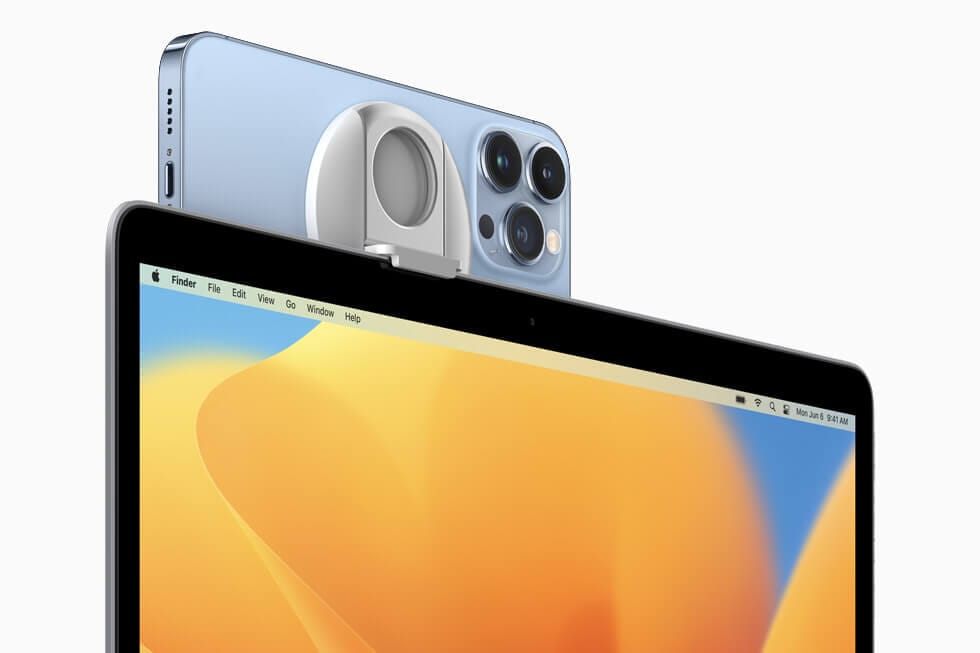 Let passkey replace passwords giving you a more secure way of signing in to your accounts. In addition, it keeps you safe from phishing, syncs your devices, and secures data from leaks. Certainly, this is a feature that makes using the internet not so scary anymore. 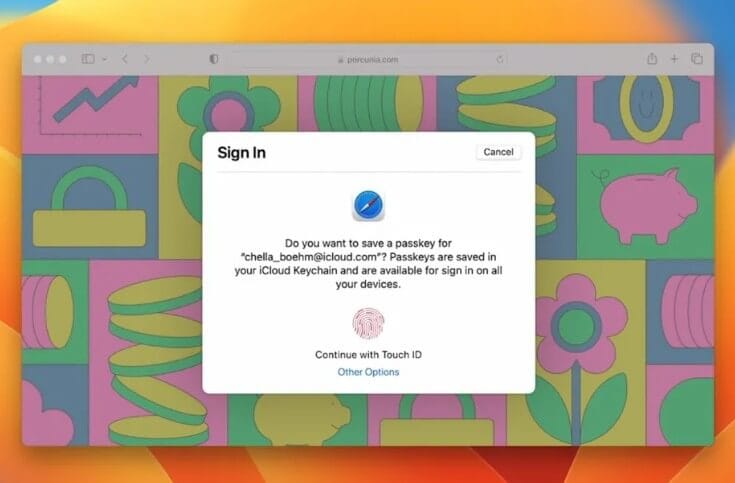 You can now seamlessly move facetime across your Apple devices. Facetime with collaborators with just a click on finder, Safari, reminders, supports, and all supported third-party apps.

The redesigned Game center profile shows your friend's activity and achievements. In addition, it now automatically starts a FaceTime call when playing games with the new SharePlay integration that supports multiplayer. Cheers to a better gaming experience. 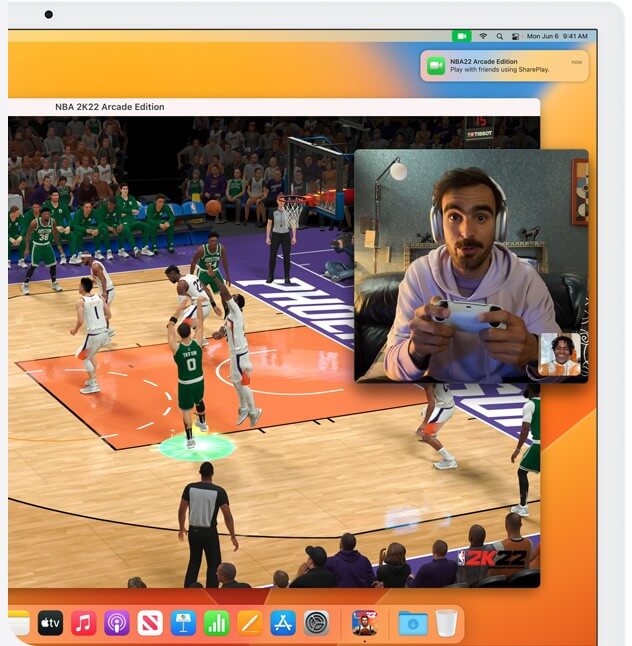 Get more out of Safari by syncing your extensions and website settings. There are added languages like Turkish, Thai, Vietnamese, Polish, Indonesian, and Dutch. More extensions are supported, and tab group start pages and easily manage your network settings and Wi-Fi passwords. 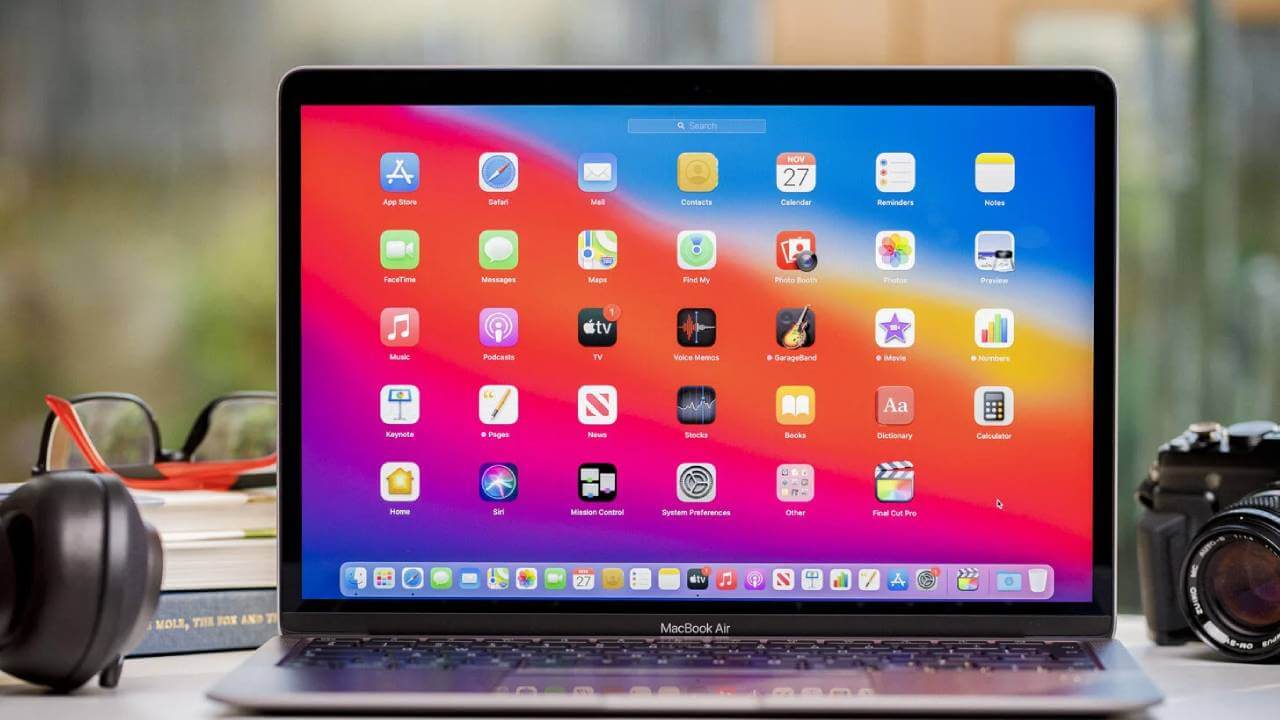 The Weather app was brought to the Mac by Apple, and while it has the same look as the iPad and iPhone versions, the Mac version has been optimized for a larger display. It includes interactive animations, detailed maps, and forecast modules that may be clicked on. All of the features of the iOS app are available on the Mac software, including animated weather backgrounds that change based on the weather at your location, severe weather notifications, air quality monitoring, weather maps, and predictions.

Apple has included a new Visual Lookup function that allows you to take the topic from an image with a single click, add it to another image or turn it into a Messages sticker. It is available in Photos, Screenshot, Quick Look, Safari, and other apps, and it almost perfectly isolates the subject from the image by erasing the background. Birds, insects, and monuments can now be recognized using Visual Lookup.

Turkish, Thai, Vietnamese, Polish, Indonesian, and Dutch have been added to the language support list.

The Stocks app now includes earnings dates, showing when a company's following earnings report will be released, and new Stocks widgets. You may also make many custom watchlists to arrange better the tickers you're interested in.

Before completing a transaction, the payment sheet has been revamped to make it easy to add cards, manage information, and review facts about a purchase.

The Mac version of the Clock app for iPhone and iPad is now available. It allows you to use Siri to set timers and alarms and check the time in another city. Alarms with custom notifications are supported, and the local time can be shown in different time zones worldwide. The Clock's functionality can be expanded by integrating Shortcuts.

Reminders will send a notification when tasks are added to or finished in shared lists.

In the Tag Browser and Custom Smart Lists, you can filter for any or all of the criteria you've chosen.

Notes in macOS Ventura are automatically grouped into Smart Folders based on new filters. Date Created, Modified, Shared, Mentions, Checklists, Attachments, Quick Notes, Folder, and more have rules. Apple has also included filter options for Smart Folders and the Tag Browser, as well as the ability to combine notes by chronological categories such as Today and Yesterday for quick reference. The Notes app supports collaboration features that allow anyone with a link to a note to join in and work on it. Locked notes can be encrypted end-to-end with Mac's login password, and the Notes app supports end-to-end encryption with Mac's login password.

Other features get updated on MacOS Ventura:

Not just this, developers will add additional features in subsequent updates; you can expect:

This is a new software that Apple has touted as coming out later this year, in which you can brainstorm ideas with other invited users on a blank canvas, and it will operate on a Mac, iPad, and iPhone. You can include photographs, PDF files, and videos in your message and preview them to ensure that it is relevant to the topic at hand. 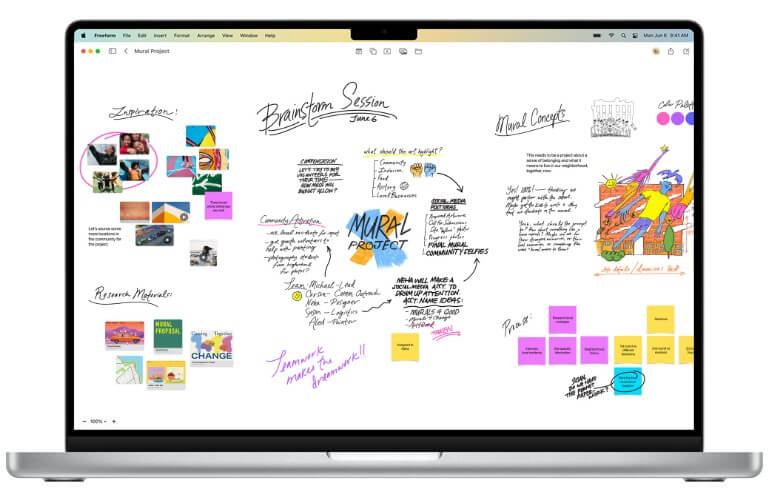 MacOS Ventura has introduced an extra layer of security to your Mac's USB-C connector, as Apple is always searching for new methods to lock down your Mac's security. An alert will appear when a USB or Thunderbolt accessory is plugged into a port, asking if you want to enable the accessory to connect. Users will then have the option of Ignoring or Allowing the device.

Ventura adds new accessibility features like 'buddy controller' to the previously disclosed functionality of door detection and lives captioning in a FaceTime call. This allows a user to utilize numerous controllers as if they were one, making it easier to access the buttons in some games. Voice Control also improves when it comes to learning new words by saying them aloud. MacOS Ventura will hear this, which will be saved in its dictionary for future use. There's also using a third-party conferencing app on the Mac or putting up live captions for a FaceTime session. This can make it easier to talk in Ventura over the phone.

These are the Mac systems for which the MacOS 13 Ventura is compatible:

Apple discussed the enhancements coming to the next edition of macOS during the WWDC 2022 keynote on June 6 at 10 a.m. PT. However, the program will not be available to the general public until later this year, likely in late October 2022. A previous release MacOS Monterey arrived on Monday, October 25, 2021. Thus, macOS 13 should release in a similar time frame.