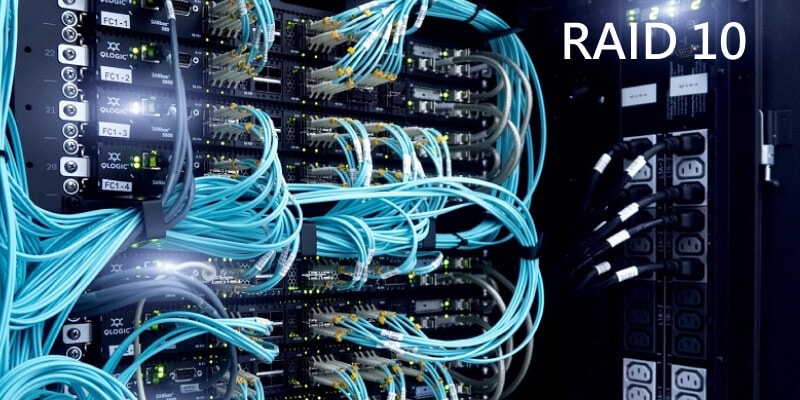 Efficient storage is the need of today. The internet adds hundreds of terabytes of new data daily, with servers bearing most of the burden. Therefore, we not only need an alternative to simple storage but to make it more accessible with lower hardware specifications. A Redundant Array of Independent Disks (RAID) has helped alleviate the issue but choosing the most beneficial configuration is tough. Throughout this piece, you’ll learn all about what is RAID 10, why it is so popular, how does RAID 10 work and whether your system is fit for a RAID 10 configuration.

RAID 10 is a nested RAID type that combines RAID 1 and RAID 0, thus its name. Many professionals prefer writing it as RAID 1+0. The array first stripes the data into blocks (RAID 0) and then creates a mirror image for it in separate drives (RAID 1). Remember that it is not the same as RAID 0+1 that works in reverse, first creating the mirror image for the data and then striping it down into blocks.

RAID 10 performance is exceptional as the system can read and write data much faster, thanks to conveniently organized data blocks. The address of each block makes them more accessible, reducing the stress on the processor and RAM. Because each block has a mirror image stored on another drive, the failure of one drive doesn’t cause a system crash. Still, RAID 10 has lower failure tolerance than other configurations, like RAID 5 and RAID 6. 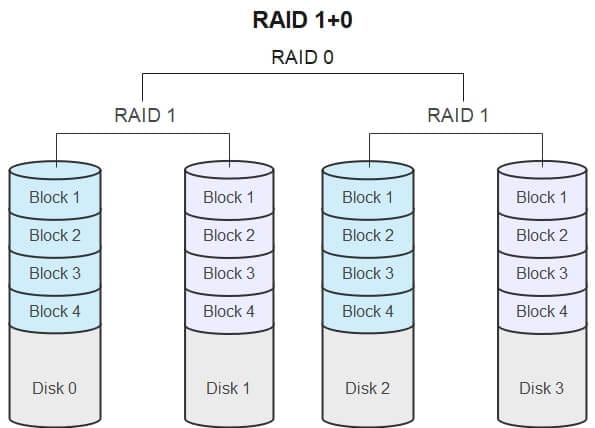 RAID 10 performance is quite impressive for a simplistic array that doesn’t require a lot of hardware.

Due to its high I/O performance and uninterrupted access in most faults, the RAID 10 configuration is ideal for the below-mentioned applications.

If you know how does RAID 10 work, you can observe the advantages it brings to any deployment. Some of the most notable ones include:

The high I/O performance alongside the fault tolerance for RAID 10 doesn’t come without its tradeoffs. Before applying a RAID 10 array to your server, you should consider its disadvantages, too.

While people often denote it as RAID 1+0, the order of data storage takes place in reverse. First, the data is striped into blocks (RAID 0) and assigned an address for easier access in the future. Before the system stores it in a drive, it first creates a mirror image with a separate address (RAID 1) and stores it in another. 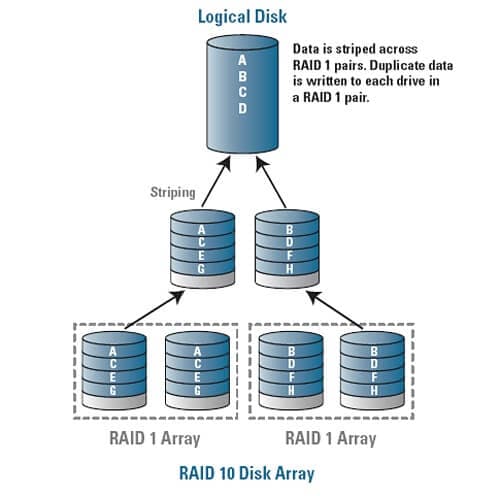 In regular usage, the system calls the original data block when an information query is generated. The read/write speed is relatively high as all drives remain active. If the array experiences a failure, you can switch to any of the mirror data sets without requiring a system shutdown. The data block is identical, which doesn’t let the end user know the difference.

Due to its combination of two of the most straightforward RAID setups, you can configure RAID 10 for your server with a few simple steps. In terms of hardware, you need at least four disks or partitions. Furthermore, the RAM and processor requirements aren’t too sophisticated, either.

Since most servers use Linux, we’ll focus on how to configure a RAID 10 array for the same. 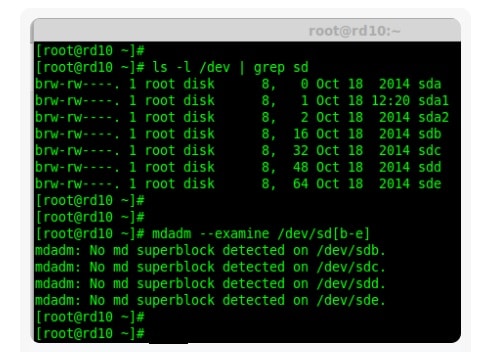 You can change ‘sd[b-e]’ with appropriate drive names as per your server.

The process of creating a new partition is the same for each disk. Press the N key and assign it a number. Once you’re done, press ‘p’ to print the partition and ‘w’ to write any changes. 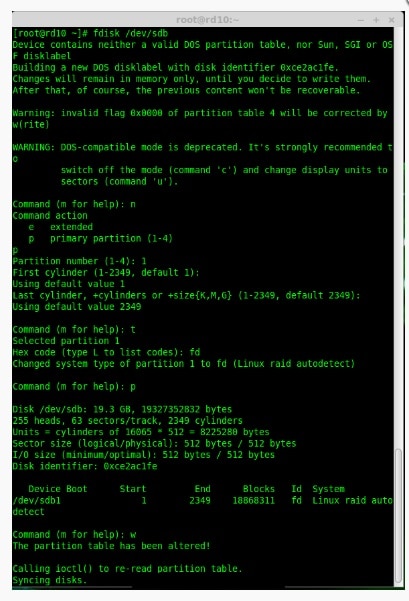 You can verify the RAID device using the ‘cat’ command.

It should show the array as active and re-syncing. 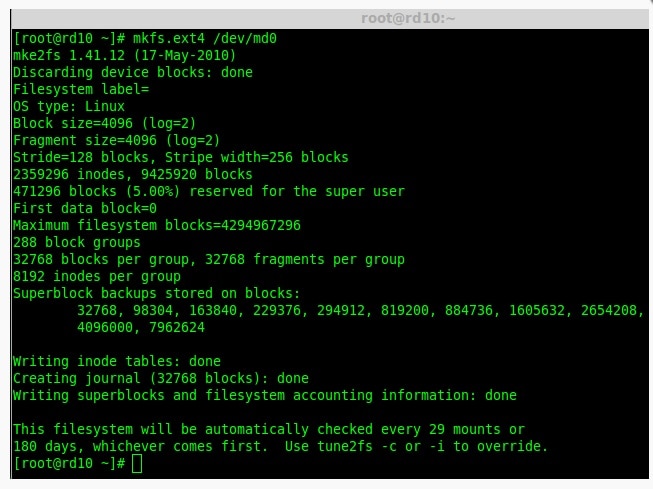 It shall mount the files automatically without you designating the appropriate drive. You can verify it by utilizing the command mentioned below.

And that’s it! You can now add and edit files to your server with a RAID 10 configuration. You can edit the settings of the RAID controller using the ‘/dev/md0’ identifier.

What Happens When RAID 10 Configuration Fails?

RAID 10 only offers limited protection against disk failures. If the damage is too extensive, you may need third-party RAID data recovery software such as Wondershare Recoverit to pick up the pieces. It works with most operating systems and doesn’t require any coding.

Follow the 3 steps below to recover deleted or lost data from RAID 10 drives with Recoverit:

Launch Recoverit RAID 10 recovery software and choose the RAID 10 hard drive for which you wish to recover the data under the Hard Drives and Locations tab.

After choosing the location, Recoverit will start an all-round scan and display the files found on the disk or site.

You can browse through all the recoverable files during and after the scanning. Use the Preview button to check if it's your desired file. Finally, click on the Recover button to retrieve the correct files.

Comparing RAID 10 to Other RAID Levels

Now that you know what is RAID 10, it is time to compare it with some other RAID configurations. You can check out the links below for the same.

Yes, as RAID 0 only stripes the data and stores it in the form of data blocks, whereas RAID 10 needs to create an exact copy as well. Although, you should note that RAID 0 has no fault tolerance.

How Many Drives in RAID 10?

RAID 10 minimum drives requirement is four. The maximum you can go is 144.

If you need exceptional input/output performance with some semblance of fault tolerance, then RAID 10 is perfectly worth it. However, it is not ideal for large-scale servers that need to maintain an expansive database securely.

What is the Disadvantage of RAID 10?

The most significant disadvantage of RAID 10 is its space efficiency. Because it copies a backup of every data block, the configuration only makes 50% of the space usable. That is the reason why large-scale servers usually don’t use it.

Does RAID 10 Require a Hot Spare?

Hot spares can help you increase the tolerance of your RAID 10 array substantially. Typically, you should have a hot spare if you have more than 30 drives operating with RAID 10.

And that concludes this guide on what RAID 10 is and how RAID 10 works. We hope you learned to improve your server configurations in the future. Have any queries for us? Let us know in the comments below.