Get to know about the best audio format in this guide. We have provided details about the top music and audio files with a solution to recover deleted audio files.

Which is the best audio file format out there and is WAV better than MP3?

If you have similar questions in mind and are confused about the different types of audio formats, then this would be a perfect guide for you. In this post, we learn more about different audio formats and also provide a quick guide to recover deleted music files as well.

As you know, there could be different kinds of music formats to save sound files. For instance, some of them follow a lossy compression while others follow a lossless compression technique. Though, these audio file formats serve their distinctive function that would depend on different situations. 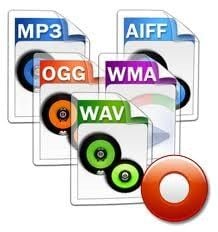 Out of all the audio formats, uncompressed files are recommended for their authenticity. As the name suggests, these audio files are uncompressed. That is, real-world sound waves are simply converted into a digital format without any processing in between. This is why they occupy more size and retain detailed information about the recorded sound.

The WAV format is one of the most widely used uncompressed formats for audio files. It stands for Waveform Audio format and was introduced in 1991 by Microsoft and IBM. The audio container follows an uncompressed technique and is majorly used to store sound recordings in CDs.

Although the format is not that popular in the present time, it is still extensively used in the recording. The size of an uncompressed file is usually more since it follows a standard 14-bit encoding. Though, we can still compress a WAV file by following a lossless compression technique. Ideally, the size of a one-minute uncompressed WAV file can be around 10 MB.

Just like WAV, AIFF files are also uncompressed. The AIFF file is based on IFF (Interchangeable File Format) and was first introduced by Apple. This is why the format is majorly used by Apple manufactured devices. The AIFF format was introduced almost 3 years before WAV to store CD-quality music. Presently, AIFF-C, which is a compressed version of the format, is majorly used.

The PCM audio format is a commonly used format to store audio files in CDs and DVDs even now. PCM stands for Pulse Code Modulation and is ideally a technique to convert analog audio files into digital formats. To do this, the sound file is sampled under different intervals. This later corresponds to the sampling rate of the file. The Linear Pulse Code Modulation (LPCM) is a sub-type of the format that is mostly used to store audio files.

PCM vs WAV vs AIFF

When we compare AIFF vs WAV, the difference is not that prominent. It is just that WAV is owned by Microsoft while AIFF is owned by Apple. Though, both formats rely on the PCM technique to convert analog sound into digital format. That is, PCM is a technique that is contained by both AIFF and WAV. Their usage would depend on the type of device you own.

Related: Read on and know how to repair corrupt WAV files.
- 2 minutes to read it.

Since uncompressed files can consume a lot of space, it is recommended to compress these sound files for storing. In the lossless compression technique, the original data is retained while shrinking the file size. This would depend on the compression algorithm that is used. Ideally, lossless techniques can make files 2 to 5 times smaller in size while still retaining the original data.

FLAC stands for Free Lossless Audio Codec and has gained tremendous progress since its introduction in 2001. As the name suggests, it is a free open-source compression format for audio files. The audio format can compress a file to up to 60% of its original size without compromising with its data (losing any bit). Presently, it is considered as an alternative to the popular MP3 format. FLAC files are also recommended as they retain the metadata of a file.

This is a lossless audio compression technology that is developed by Apple. ALAC stands for Apple Lossless Audio Codec and was first introduced in 2004. Though, it was in 2011, when the compression algorithm became royalty-free to promote its use. The two major file extensions of ALAC encoding are .m4a and .caf. It is the native compression for iOS and Mac. Since iOS devices don't support FLAC compression, users need to use ALAC extension by default. The compression technique retains the meta content and the files are usually of half the size as WAV audio.

WMA stands for Windows Media Audio and has been developed by Microsoft. Ideally, WMA can be both lossy and lossless. The lossless WMA compression might not compress files as well as FLAC or ALAC, but it is recommended for its DRM support. Also, it is mostly used by native Windows users. It is a propriety compression technique and thus is not recommended for data transfer or distribution.

FLAC vs ALAC vs WMA

From all the lossless compressed audio files, FLAC is the most widely used option. While ALAC is used by Apple device owners, WMA has more popularity among Windows users. Though, both FLAC and ALAC are royalty-free compression techniques while WMA isn't. Also, WMA follows strict DRM restrictions.

If you don't want your music files to take a lot of space, then you should know about these file extensions. They follow a lossy compression technique and thus the original data quality is compromised. Therefore, the music file might not sound just like the original audio. Though, it will also reduce the size of the file drastically.

MP3 is certainly the most popular audio format that is accepted by every leading platform and device. It stands for MPEG-1 Audio Layer 3 and was first introduced by the Moving Picture Experts Group in 1993. The compression technique gets rid of all the sound that is not audible to human ears or noise and then focus on the actual data. This can reduce the size of the audio file by 75 to 90% as compared to the original size. It is known as a universal music extension as the open format is used in almost every media-supporting device.

OGG is a free and open-source container that is mostly associated with Vorbis files. The file container (and the extension) was popular in the early 2000s because of the release of Vorbis. While the compression technique was highly sophisticated, it never took off and presently isn't widely used in the market.

AAC stands for Advanced Audio Encoding and can be used as a container for common extensions like .3gp, .m4a, .aac, etc. It is the default encoding technique for iTunes, iOS devices, Sony Walkmans, Playstations, YouTube, and other sources. The compression format was developed in 1997 soon after the release of MP3. While it isn't as popular as MP3, the audio quality of AAC files is considered far better.

Ever since the release of WMA format by Microsoft in 1999, it has gone through several changes. The format can follow both lossy as well as lossless compression techniques. It can drastically reduce the size of an audio file while retaining most of the data. Though, it is a propriety format, owned by Microsoft. While the output is better than MP3, it didn't gain popularity as it wasn't open-source.

MP3 vs OGG vs AAC vs WMA

All these four techniques follow lossy compression, but they are quite different from each other. MP3 is one of the most widely used formats due to its open-source benefit. On the other hand, OGG is the least popular of the lot. AAC is mostly used in streaming in Sony and Apple devices. Similarly, WMA is a propriety format, which is owned by Microsoft. While AAC and WMA provide better results than MP3, they don't share the same popularity. After all, we still refer to music players as "MP3 Players" even today and not AAC Players.

Learn how to recover data from iPod, a popular Apple device.

It is hard to call any single compression technique as the best audio format. Ideally, it would depend on your requirements. I would recommend going with the following techniques in these scenarios.

If you don't have any problem with the size of audio files and would like to retain the original quality of the music, then you can go with these formats. Though, they are not recommended for streaming or transferring music files.

These compression techniques are recommended to maintain a balance between the quality of music and the size of audio files. While the size would be lesser than the original file, the quality will be maintained.

This is a lossy technique, in which the size as well as the quality of the audio would be reduced. Therefore, the original sound of the music might be altered. The formats are mostly used for data transfer and streaming.

Part 5: Other Types of Audio Files

Apart from the above-listed audio file formats, there could be several other extensions as well. While they are not as popular at the listed formats, you can still know about them briefly.

Part 6: How to Recover Audio Files?

It doesn't matter what kind of audio format you are using, chances are that you might still end up losing your files unexpectedly. To resolve this, you can take the assistance of audio recovery software. Recoverit Photo Recovery tool provides a hassle-free way to recover deleted audio files as well. By using it, you can recover 10 media files without any fee and size restriction.

Once the audio recovery tool is installed on your Windows or Mac, follow these steps to recover deleted mp3 files.

Step 1: Select a source to scan

Firstly, launch the Recoverit data recovery application on your system and select a location to scan. It can be a system's internal partition or any connected media like SD card, MP3 player, external hard disk, etc.

As Recoverit would look for any lost or deleted content, you can just wait for a while for the process to be completed.

Once the process is completed, you can view the retrieved content on the interface of Recoverit. Now, you can simply select the audio files you wish to get back and recover them to a trusted location. 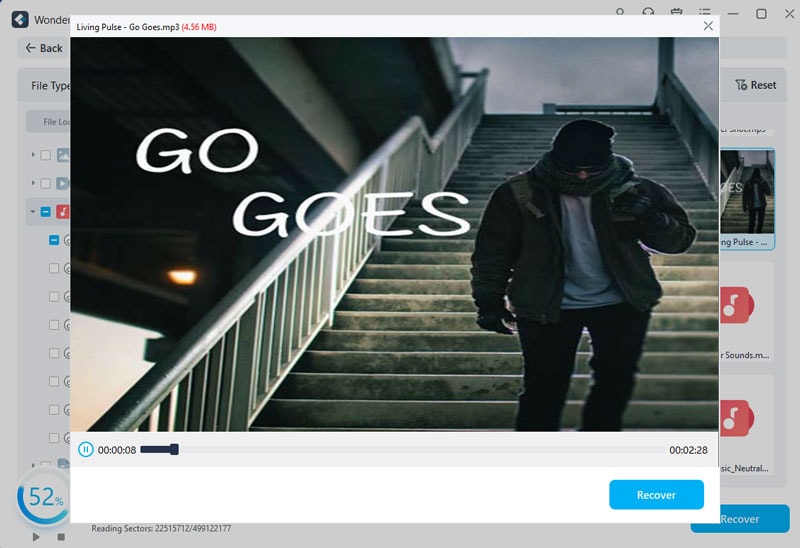 Now when you know about the major types of audio formats, you can easily differentiate them from each other. Furthermore, if you don't want to suffer from the loss of your favorite music files, then keep Recoverit Photo Recovery handy. It is a professional audio recovery tool that will help you retrieve all kinds of media files from different sources. As a highly reliable and user-friendly application, it will recover deleted audio files in seconds.