What Is NOR Flash Memory | Explained

NOR Flash Memory guide to definition, features, architecture, types, NAND vs NOR, and more.

NOR Flash Memory is a type of Non-Volatile Memory (NVM) that is used in electronic devices to store data. It usually comes in the form of integrated circuits and has been widely used since the early 1990s. NOR Flash Memory offers many benefits for device manufacturers and consumers, such as a high read/write speed, low power consumption, and a compact size.

1. What Is NOR Flash Memory?

NOR Flash Memory is made up of FGMOS or FGMOSFETs (Floating Gate Metal Oxide Field Effect Transistors). Each FGMOS is an electronic component that can store either 0 or 1. This is why these transistors are called memory cells. 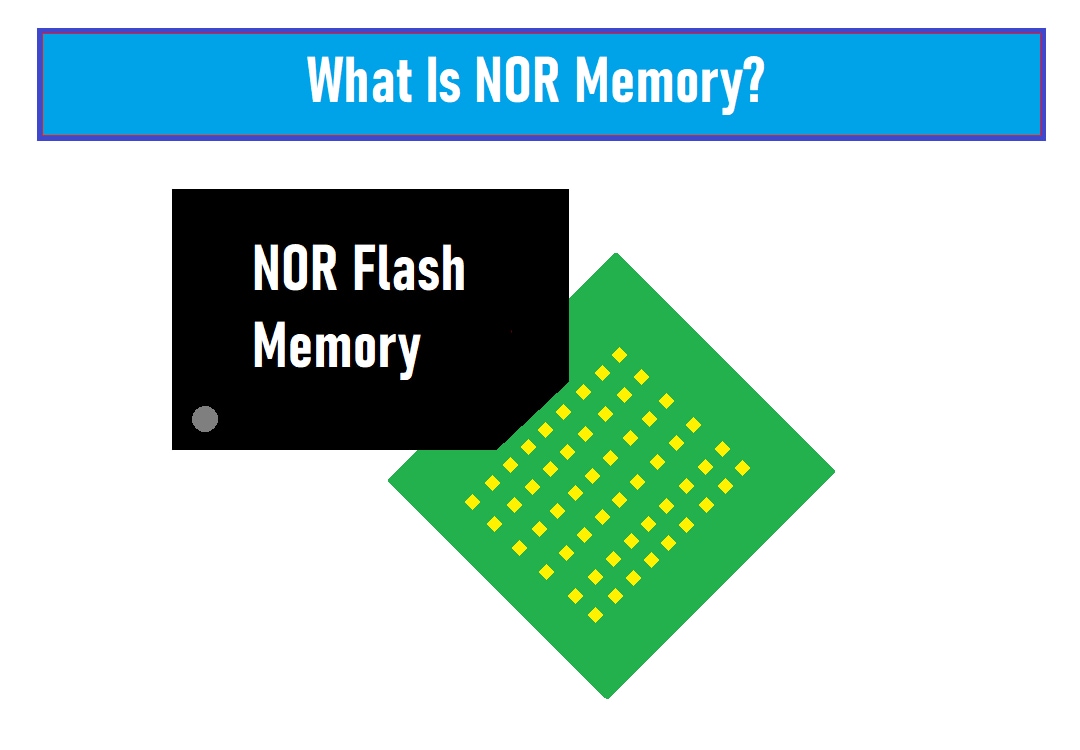 In NOR Flash Memory, these cells are arranged in a parallel manner. This is why we can read the contents of this memory very fast. NOR Flash Memory is also non-volatile in nature, meaning that it can permanently store its contents even when it is not connected to any power source such as a battery or supply. NOR Memory is used where an Individual byte is addressed instead of the whole page.

Uses of NOR Flash Memory

This type of memory is used in the following things:

Features of NOR Flash Memory

NOR flash memory is non-volatile storage, meaning the storage devices with this kind of flash memory retain the data without using a battery or any other voltage supply. It can keep the data for a long period of time without corrupting it.

NOR flash memory is programmable this is why it is used in scientific instruments, medical devices, cell phones, USB drives, etc. This memory can also be used for creating storage units or devices.

The time required for reading the stored data is less in NOR Flash Memory. This is why this memory is used in the applications where random access or execute-in-place techniques are used.

NOR Flash Memory has a Random Access Interface, meaning you can address a certain part of the memory instead of reading it sequentially from the beginning. This feature makes it more flexible to use during the workflow.

NOR Flash is a dense memory meaning a small chip can store plenty of data, but it is not manufactured for selling purposes as the manufacturing cost of NOR flash is greater than the NAND flash.

History of NOR Flash Memory

NOR Flash Memory was developed by Toshiba, a well-known Japanese company, in 1988. Fujio Masuoka was the team leader and engineer who created this type of flash memory with his determined teammates. Fujio Masuoka’s inventions have changed the world forever because his goal was to replace the big and slow magnetic storage devices, and he succeeded in it.

Benefits and Limitations of NOR Flash Memory

NOR Flash Memory is solid-state hence it is shockproof. It would still work after it is dropped by accident.

The reading time of NOR Flash is very fast.

NOR Flash Memory can be manufactured in small-sized IC chips.

NOR Flash Memory is totally non-volatile.

The lifespan of NOR is more or less 10 years.

NOR Flash is the best for implementing Execute-In-Place Technique.

NOR Flash is expensive to manufacture.

2. How Does NOR Flash Work? 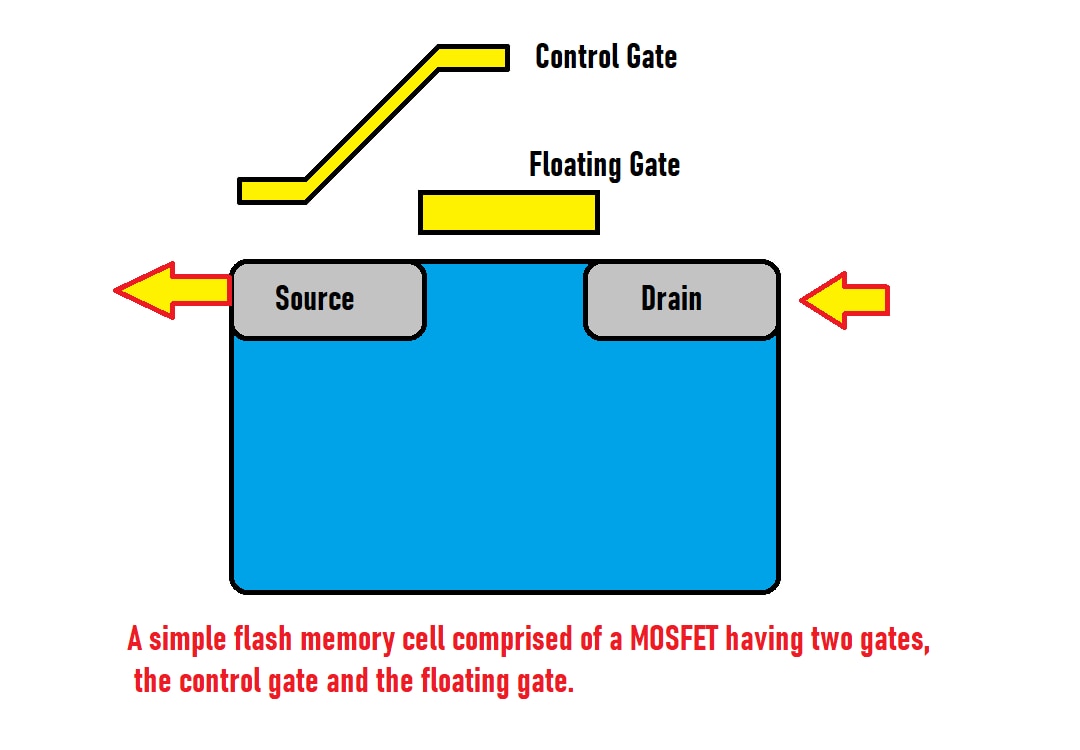 The basic building block in NOR Flash Memory is FGMOS (Floating Gate Metal Oxide Semiconductor Field Effect Transistors). Each transistor has a region known as a Floating Gate. This region can either trap or release the electrons inside it. These electrons are trapped by switching on the transistor. Since each transistor can represent either 0 or 1, so each is called a memory cell.

3. Types of NOR Flash Memory

Serial NOR Flash is also known as SPI NOR, where SPI stands for “Serial Peripheral Interface”. It has sectors and pages, where sectors are larger than pages. A sector is a block of memory who's all contents can be erased at a time while the data is written on the pages.

In this kind of NOR Flash, the memory controller addresses the memory using a parallel address bus. The parallel NOR can have either an 8-bit or 16-bit bus. A 16-bit address bus can address the Parallel NOR Memory with more storage capacity.

NOR vs NAND Flash Memory

Both NOR and NAND flash memory are different from each other. Basic difference is the speed and data storing techniques. NOR is considered faster than NAND memory. Both memory chips are used to store data. Here’s the complete article about NOR vs NAND flash memory.

NOR flash memory manufacturers faced difficult challenges during the era of 2016 including the top manufacturer from the USA. But still many top American companies are still producing high-quality NOR flash memories. According to a survey in 2016 the top Manufacturers for creating NOR Flash Memory are listed here:

4. How to Recover Lost or Deleted Data from NOR Flash Memory Storage Device

If your data has been deleted, then you do not need to be worried at all because Wondershare Recoverit is an app that can retrieve your lost data from any kind of internal and external storage media. It can recover your data from SSDs, HDDs, Memory Cards, USB Flash Drives etc.

No worries. Wondershare Recoverit can get back your lost data within 3 steps. The ultimate and professional data recovery software is totally reliable and 100% safe.

The app has a very user-friendly UI, and it can automatically detect all of the storage devices attached to your laptop or PC in no time. You only need to scan these devices and enjoy your snacks.

Step1Select The NOR Flash Memory Device

Launch Recoverit data recovery software and select the “Hard disk drives and Location” option on the left bar. Now, you can see all the drives including flash drives and hard drive partitions. You have to select the NOR Flash Memory storage device from which you want to recover the files.

Right after the selection, the application will start scanning automatically. It takes seconds to minutes depending on your file size. You can select specific files from the file menu that you want to recover. These file type may include photo, video, audio, document, database, web files, etc. You can also search specific folder to start recovering from it. 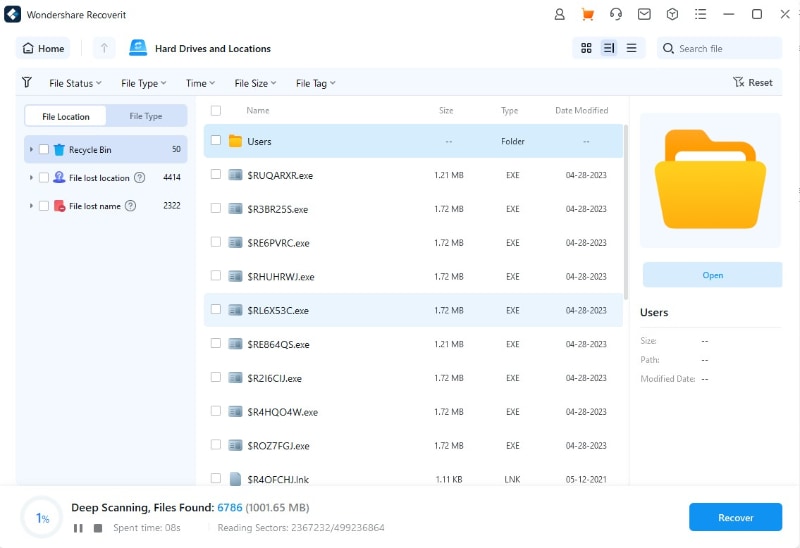 Recoverit allows users to preview the recoverable files before proceeding to the recovery step to ensure that you will recover your desired files. If you are premium users, you can preview files with no limits. If you utilize the free version, you can still get a 10-second preview. Finally, click the "Recover" button to retrieve your files back.

What does NOR stand for in Flash memory?

NOR is actually a logic gate, and it consists of an OR gate followed by a NOT gate. Simply, one OR and one NOT gate make a NOR gate.

Is SD card is NAND or NOR flash?

SD Card stands for “Secure Digital Card” and it is a NAND flash memory not only because manufacturing NAND Flash is cheaper but also because it has more advantages such as capacity and fast Write and Erase Times.

What is the difference between NOR and NAND?

What are three types of Flash Memory?

This article is a very brief guideline on NOR Flash Memory. It will not only clear your basic concepts about this type of Flash Memory, but it will also narrate to you the history and the features of this memory. We have also compared NOR Flash with NAND Flash for your better understanding.

This guideline includes the benefits and limitations of NOR Flash memory, along with the top manufacturer industries of this Memory. In the end, we are providing you with the link to the outstanding software that can recover your lost or deleted data within minutes.

How to Recover Deleted Files from Flash Drive

Why USB Device Not Recognized in Windows