What Is ROM? A Complete Guide to Read-Only Memory

This article is a very easy and descriptive guideline on a famous type of memory known as ROM (Read-Only Memory). ROM is one of the storage memories that can store the data permanently, this is why it lies in the category of non-volatile memory devices. Let’s find out more about ROMs. 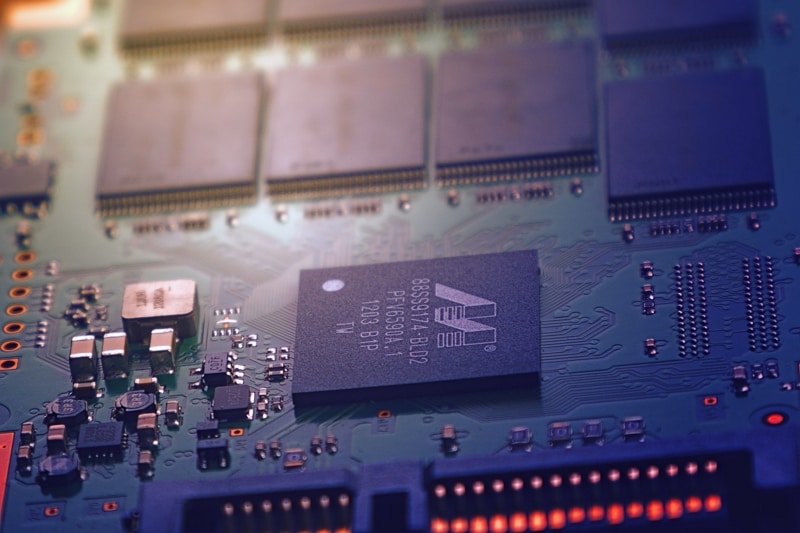 Read-Only Memory is abbreviated as ROM. As it is obvious from the name, the contents of this type of memory can only be read but it is not true to some extent because there are types of ROM that can be re-written again and again. ROMs are non-volatile in nature meaning that the contents of these memories are not erased when the battery or power supply is disconnected.

What Is ROM Used for?

All computers, laptops, and devices that have operating systems have an IC chip installed in their PCB (Printed Circuit Board) known as BIOS. BIOS stands for Basic Input/Output System. BIOS not only initializes the computer hardware but also it provides services to operating systems such as Windows and macOS etc.

All mobile phones have a ROM installed on them. These ROMs store the different functionalities of your cell phone. For example, the keypads in the cell phones use ROM for dialing numbers and codes while in the smartphones the ROMs control the touch screen drivers. ROMs are also used for storing the operating systems and built-in apps and services in mobile phones that’s why even after the factory reset you can find these apps on your phone.

ROMs are not only used as firmware but also as a tool to update the firmware. Firmware are program codes written on the ROMs permanently for performing some functionalities throughout the life of a device. These are present in the webcams, printers and scanners, digital televisions, USB flash drives, etc.

Microcontrollers or MCU are programmable intelligent circuits that have a small processor on them. MCU (Microcontroller Units) have ROMs embedded on their PCBs (Printed Circuit Board) for storing the program instructions. All types of Arduino, Atmega328p, AVR, PIC, and 8051 are examples of Microcontrollers.

Nowadays, digital electronic instruments are used instead of old analog meters with needles. These instruments not only give us error-free results but they also provide us readings with more precision and accuracy. This is all possible due to the ROMs installed in these scientific instruments.

ROM is a type of memory that is programmed only once and whose contents can only be read again and again by a device or a user. Most of the ROMs are not updatable and most don’t even allow you to copy their contents. This prominent property of ROMs makes them Read-Only Memories.

ROMs are non-volatile meaning you can disconnect the device with ROM installed in it from a power source or battery and the ROM will still retain its belongings without any problems. Because of this feature ROMs are used in almost every kind of digital device as we shut down or disconnect most of the devices when we don’t intend to use them.

Dawon Kahng and Simon Sze discovered ROM (Read-Only Memory) in 1967 at Bell Labs. These genius engineers belonged to Korea and China respectively. They proposed that FGMOS transistors can be used as a memory that will have the capabilities of getting reprogrammed and now there is hardly a digital device on this earth that does not have a ROM installed in it.

There are two essential components of ROM, OR logic gates and Decoder. Decoders are responsible for converting high-level code into low-level binary language and vice versa. The OR gates receive the inputs from the decoder and perform the functions accordingly. The logic gates in a ROM are used in a manner that they can permanently store the instruction code or data.

By providing the address as an input to a ROM it gives out the data and instructions stored in it. This happens frequently when a user uses a digital device. 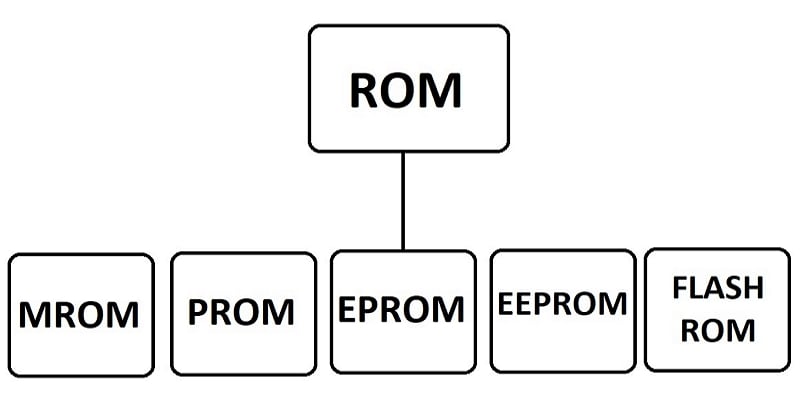 MROM is an abbreviation of Masked Read-Only Memory. Mask is a photograph of the template of the circuit that engineers want to make a ROM of. This circuit has all the functionalities that will become the built-in functions of a ROM. But this template must be provided to the manufacturers of MROMs.

MROMs were old technology and only manufacturers could build and program them in bulk quantities. The method of writing the contents into a Masked ROM is known as Mask Programming. The contents of MROM cannot be changed and are written permanently on them.

Due to these limitations, MROMs could not become famous as the scientists and programmers want something they can program and modify by themselves.

PROM means Programmable Read-Only Memory. This memory was made for the programmers so they can write their own code without having to go to a manufacturer and pay high prices. There is a special device that is used to write data into PROM called PROM Programmer. Writing code using this device is a very difficult and burdensome process.

The program written in a PROM can never be changed afterward. Hence, an error that is causing the ROM not to work correctly cannot be removed. As a result, the ROM becomes completely useless.

A genius from Intel, Dov Frohman, invented Erasable Programmable Read-Only Memory (EPROM) in 1971. This memory was created to overcome the limitation of PROM. The contents of a PROM could not be erased but the code and data of an EPROM can be easily erased. This allows a programmer to reprogram the chip instead of throwing it into a recycle bin.

As we described, EPROM can be reprogrammed after putting it in a device called EPROM Eraser. This eraser has UV light compartments in it and exposure to Ultraviolet Light erases the data of an EPROM. Because of this feature, the EPROMs are used for making projects that need modifications during development.

The contents of an Electrically Erasable Programmable ROM can be erased electrically using a signal. This is why this is the most popular type of ROM. This property allows the programmers to modify the code multiple times without having to wait for UV light to erase the contents.

In most cases, there is no need to remove the EEPROM from the socket when reprogramming it. Because of these features, EEPROMs are used in most of the latest digital devices whose software can be updated and reinstalled in case of getting corrupted. The devices with EEPROM have a greater life span.

Flash is a very fast memory that is used in the latest devices. The basic component of Flash Memory is FGMOS (Floating Gate Metal-Oxide-Semiconductor Field-Effect Transistor). The ROM made up of Flash Memory is known as Flash ROM. It is used in industrial applications and consumer devices such as computers, mobile phones, digital televisions, etc.

4. Advantages and Disadvantages of ROM

ROM adds functionalities to hardware and software on a low level. This makes the devices very fast.

Most of the ROMs do not allow technical users to change their contents. This is how most of the devices become secure.

ROMs do not need refreshing signals hence these are static.

ROMs are more reliable than RAMs as the RAMs burn out a lot.

ROMs are less expensive than RAMs.

Trying to copy the contents of a ROM for plagiarism or other purposes can lead to permanent device failure.

A device with a ROM that cannot be updated cannot be fixed in the case of the problems caused by ROM.

5. ROM vs RAM: What's The Difference?

ROM stands for Read-only Memory and it is a non-volatile memory present in the form of programmable IC chips. ROM is used as firmware in digital electronic devices for providing built-in functionalities such as computers, laptops, mobile phones, digital televisions, etc. Read-Only Memory not only initializes the hardware but also loads the operating system in the RAM.

RAM stands for Random-Access Memory and it is used in fewer devices than ROM. RAM is a volatile memory meaning it cannot retain its contents when the power is disconnected. RAM is the only way to communicate with processors. Running apps and data being processed resides in the RAM. It also gives space to the processing results. Learn more about what is RAM.

What is ROM and its functions?

ROM is Read-Only Memory and it is present in nearly all of the digital electronic devices. It stores the instruction code that makes a device capable of performing certain tasks as built-in functions. ROM is programmed by the device manufacturers only once and its contents can only be read by the device users.

How is data stored in ROM?

Most of the ROMs can be programmed using a computer. The data in ROMs is present in a Binary form or in the form of 0s and 1s. The contents of a ROM are permanent because ROMs are non-volatile, and most manufacturers do not allow the consumers to change their contents.

Can ROM be changed?

No, in most cases ROM cannot be changed as it contains the secret code that makes a device functional. Only the manufacturers can change the ROMs and their contents but some manufacturers allow the technical users to update the ROMs. In this case, the manufacturers provide the code to be installed inside a specific ROM such as BIOS.

What are Read-Only Memory examples?

Read-Only Memory is also known as ROM. It is a non-volatile memory chip that stores data and instructions permanently. ROM is present in almost every digital device such as video game consoles, computers, laptops, digital televisions, mobile phones, etc.

This article is a very simple and easy guideline on ROM (Read-Only Memory). By reading this article, you will learn about the basics of ROM and the category in which this memory lies. Along with the working of ROM, you are also guided on the different types of ROM such as MROM, PROM, EPROM, EEPROM, etc.

You will not only learn the pros and cons of ROM in this article but also be able to compare the well-known RAM with ROM. Knowing the difference between RAM and ROM is very essential as both the memory types are the backbones of every digital device. We hope this article is beneficial for you in terms of increasing your general and technical knowledge.