Understand Disk Partition | What Does It Do?

Do you know what part of the system is in charge of preparing the hard drive to install an operating system?

Part 1: What Is a Partition

As it is known, a partition is a separated segment and logical division of a hard drive in personal computers. In other words, the partition is a storage space of the hard drive. You can use the Disk Management tool of Windows computer to get a clear picture of how a partition looks. Tap the Windows key, enter "Disk" as a keyword, and press Enter. A picture like the diagram below will display on your screen. 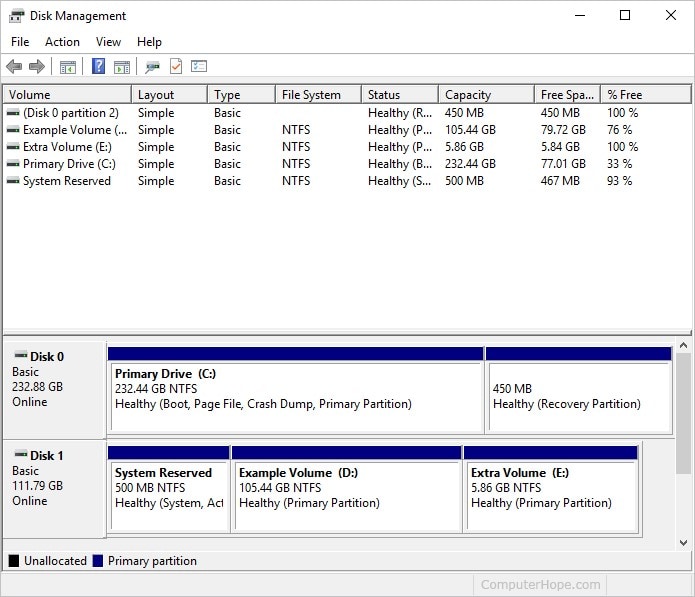 The partition is typically used to allow a user to have a different operating system installed on the same computer or give the impression that a second hard drive is installed. This separated segment of a hard drive could prove useful when a computer has multiple users, or the user is going to manage all the files.

All windows operating systems are designed so that their hard disk is divided into different partitions. Hence, it is possible to share a physical hard disk with smaller logical partitions.

There are three different types of partition, which will be explained below.

Features of a Disk Partition

To understand partition better, some of its advantages are mentioned below:

Part 2: What Is a Disk Partition Used for

Partition is not only good for the optimal and better use of hard disk space, but also you can access easier and faster to classified information. Here are some of the reasons why partitions are very important for the smooth running of your device.

There are 3 types of partition: primary partition, extended partition, and logical partition. Let's describe each one in detail. 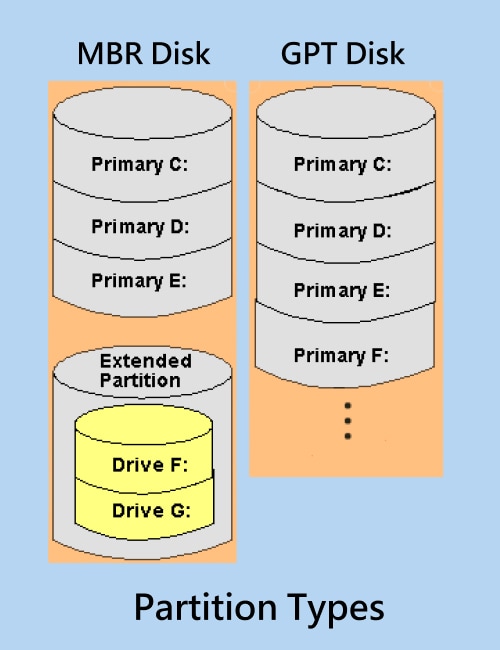 Note: Although there can be 4 primary partitions, only one of the partitions is allowed to be activated at the OS on which the computer boots.

On the other hand, on GPT (GUID Partition Table), users can create up to 128 primary partitions on a hard drive.

Note: on GPT, there is no need to create an extended partition or the logical one. Do not forget that GPT can support an 18 EB hard disk without limitations.

You already know that each partition with an operating system installed on it is called a primary partition.

A logical partition is what you can create to store things like movies, software, application files, and more. 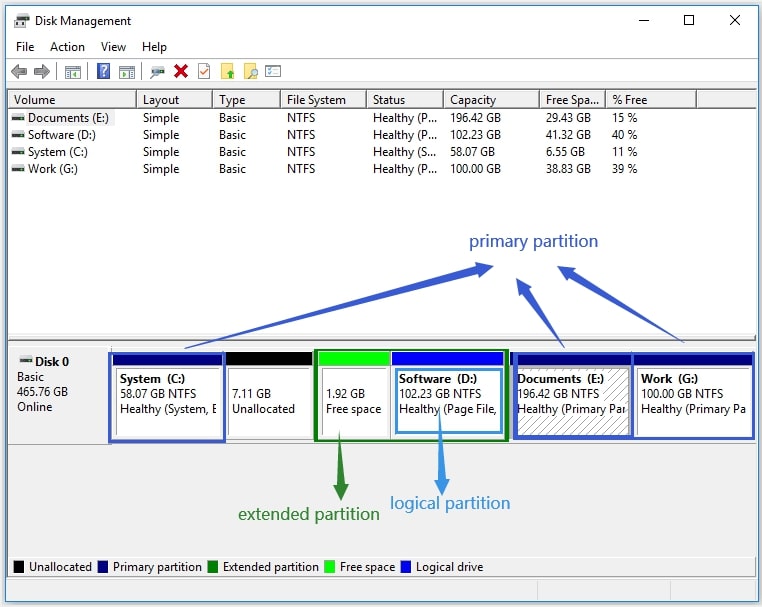 Part 4: How to Partition Hard Drive on Windows and Mac?

Some important factors such as virus attacks may lead to the use of more than one partition on the hard drive. Another reason for using several partitions on a hard drive is that the user can easily recover data when a computer crashes.

When data is stored on various partitions instead of being gathered on only one partition, the user can get it back under better conditions. In this case, you can reinstall or overwrite an OS without missing a data partition.

You have already understood why a hard drive should be partitioned. Partitioning the computer would work more efficiently. Furthermore, all things like program files, operating systems, and data would be separated and do not make a mass in the hard drive.

Here are tutorials to teach how to partition a hard drive on Windows 10/11 and how to create partition on Mac.

Note: To partition a hard drive, there is no need to install a tool or something. There is a built-in tool which is called disk management. This tool helps you to meet your need easily.

Part 5: How to Recover Deleted Partitions in Windows/Mac?

You may delete partitions by mistake or lost a partition due to virus attack. If this happened, you can learn 4 Methods to get them back on: Recover Deleted Partitions on Windows and Mac.

No worries. Wondershare Recoverit can get back your lost partitions within 3 steps. The ultimate and professional data recovery software is totally reliable and 100% safe.

Is a separated partition needed for an operating system?

It's the better option. Having a separated partition, your personal and valuable information would be saved in case of appearing major issues in windows and reinstalling if it would be needed.

What are the differences between logical partition and extended partition?

How to recover deleted partitions on Windows?

In this article, the importance of partition is explained in detail. Ease of Windows Reinstallation, Simpler Data Recovery, and Better Organization are the benefits of partitioning. In addition, it has been advised to partition hard disks to reduce the minimum sector size and improve performance.

As mentioned above, the disk management tool can help you partition. On the other hand, if your data on a partition is mistakenly deleted, there is no need to worry. By installing Recoverit Partition Recovery software, you can restore data and whatever has been missed.

Recover lost or deleted partitions on Windows and Mac effectively, safely and completely.