The Main Difference between Apple's T2 Chip vs. M1

From 2017 to 2020, Apple’s second-generation security chip, known as the T2 chip, was used in MacBooks. Deciding to keep up with the times, Apple upgraded the Mac processors and shifted from T2 to the M1 chip. This was featured in Macs released in late 2020.

Various features set the two processors apart from each other. If you want a detailed T2 chip vs. M1 comparison, look at the following article.

Want to know what it means to have Apple’s T2 chip vs. M1 on your device? Here is a detailed overview of the two processors commonly used in Mac devices:

The T2 chip is Apple's second-generation custom-built chip developed for MacBooks. First seen in the 2017 iMac Pro, the T2 chip was built on the foundation of its predecessor – the T1 chip. The T2 chip primarily delivers enhanced security features. However, it is also capable of other essential functions. 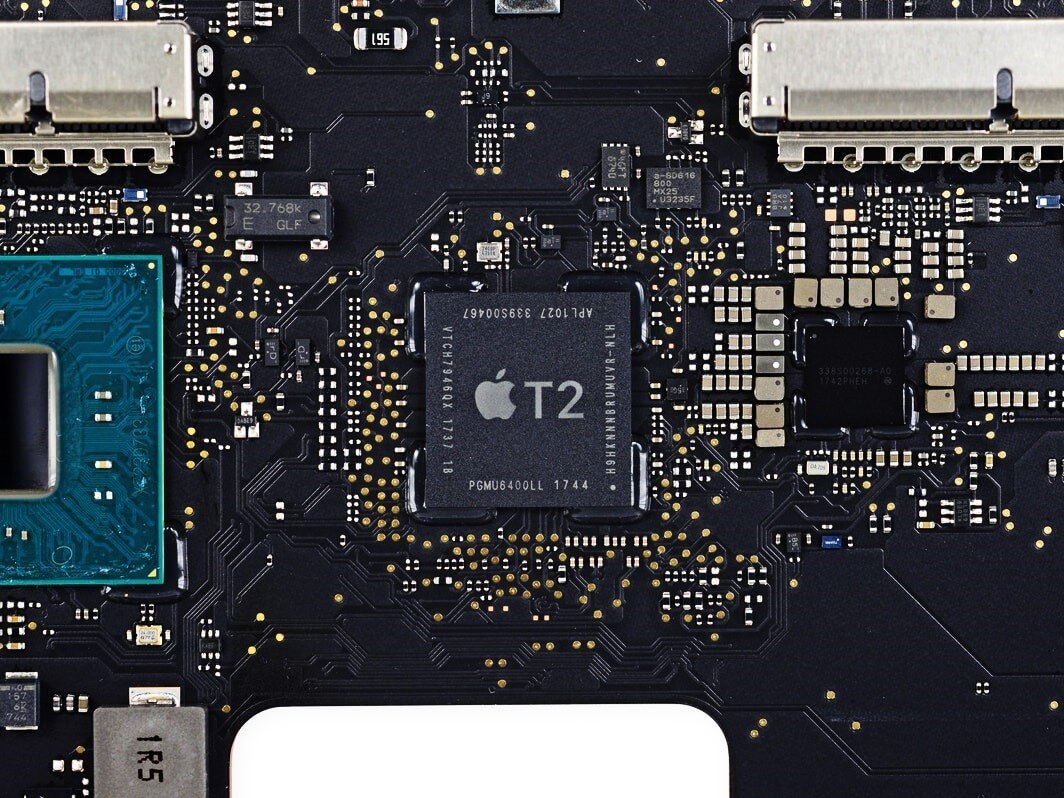 Subsequent to the release of the T2 chip, Apple released its first-generation ARM-based silicon chip. It came by the name of M1, specifically designed for Macs. The chip first debuted in the 2020 13-inch MacBook Pro, MacBook Air, and Mac mini. Recently, the M1 chip is also seen in iMac and iPad Pro.

It is Apple's first custom-built silicon system on a chip (SoC). The M1 chip is specially optimized to deliver high power and efficiency for Mac systems. Packed with 16 billion transistors, the M1 chip provides many features. It includes boosted efficiency and faster machine learning capabilities. 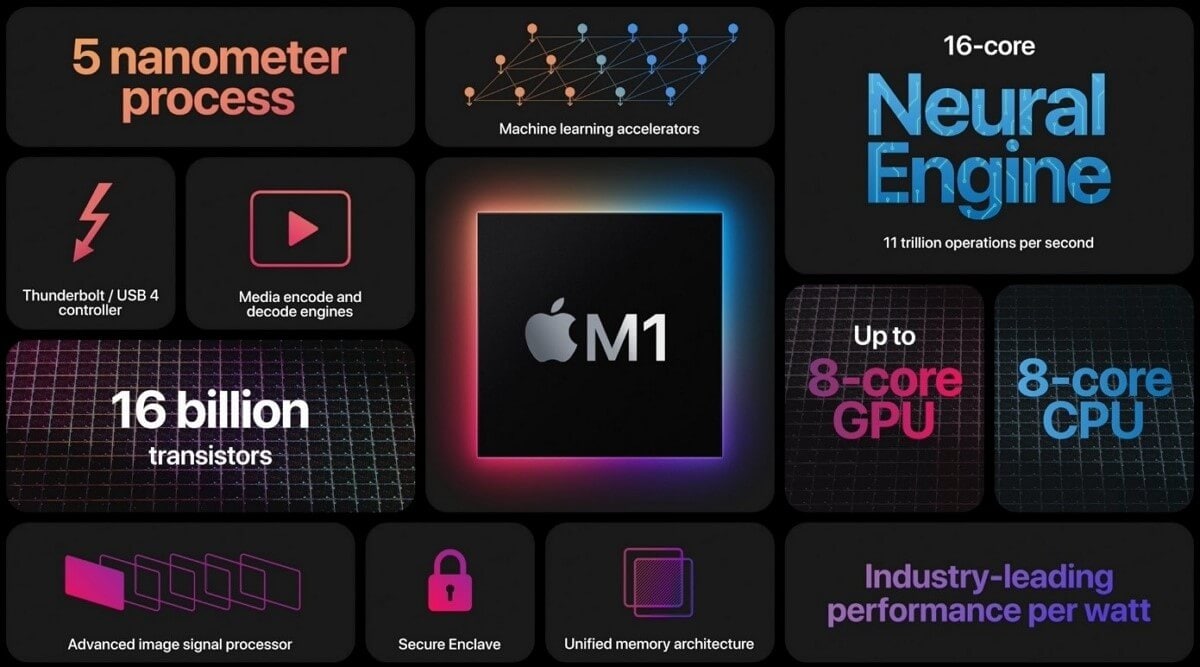 The M1 chip served faster performance speed and efficiency in the supported Macs. A major factor is that it includes several chips integrated into a single base. This unified memory architecture has enabled the Mac systems to access data from one place. This came up instead of switching between multiple memory pools.

Apple has incorporated 16 billion transistors on the low-power silicon M1 chip. This provides remarkable speed and efficiency. Owing to these structures, the M1 chip delivers up to 15 times faster learning capabilities. It associates a 3.5x faster CPU performance and a 6x faster GPU performance.

The M1 chip features an upgraded version of Apple’s Secure Enclave. It provides a broad spectrum of security features to the equipped Mac devices. Here are a few such features that have made the M1 Macs more secure in the Apple T2 vs M1 comparison:

The Sealed Key Protection feature provided by the M1 chip is intended to protect the device against external attacks and hackers. The chip prevents encrypted data from being copied to a storage medium. Because the copied data then can be decrypted.

Even if an attempt is made against the macOS or the hardware, the device data is made unavailable off the device. In addition, third-party developers can also use file-level encryption. This helps them secure sensitive data without impacting the system’s performance.

One of the major security advantages of the M1 chip to protect the device is the Boot Monitor option. This enables the Secure Enclave to undergo a series of steps upon every system boot. It will ensure that your device has not been compromised.

The primary function of the Secure Boot is to certify that the OS upon startup is Apple-authorized. If the system cannot be verified as legitimate. The Mac automatically downloads updated integrity information required for verification. The M1 chip also continues to perform authorization checks in the background to protect your device against malware.

Apple’s M1 chip works to keep your Face and Touch ID data secure using its Secure Neural Engine. This is achieved via a dedicated hardware security controller. It resets the state of the Neural Engine after every transition.

Apple T2 vs M1 chips have a range of distinguishing features. The T2 chip is Apple's second-generation custom-built coprocessor used in Intel-based MacBooks from 2018-20. On the other hand, the M1 chip is a first-generation Apple silicon SoC processor being used in recent models of Macs.

The T2 chip used the Secure Storage Component gen 1 (or EEPROM). Apple has replaced this with the SSC gen 2 in the M1 chip. The Intel-based Macs required an additional T2 chip for a Secure Enclave. Apple has built the M1 chip with multiple coprocessors embedded into one. It provides a range of functions, including the Secure Enclave.

This has also enabled the M1 chip to enhance the Macs' processing speed while removing the CheckM8 vulnerability. The M1-equipped Macs offer notably improved security, speed, and performance capabilities. It has displayed results in contrast to the Intel-based Macs containing the T2 chip.

Part 5: Why Is It Difficult to Repair T2 Chip?

While the T2 chip provides improved security benefits to users, it comes at a cost. The additional security layers accompanying the T2 chip have made it extremely difficult to repair Macs.

The T2 chip is designed to detect and operate only Apple-authorized hardware. If you decide to repair your Mac from a non-Apple source, the T2 chip will identify it upon post-repair reboot and will not allow your Mac to operate. This is why you cannot repair T2 Macs on your own.

Apple has developed diagnostic software and distributed it to its authorized service providers (ASP) and official stores. This AST 2 System Configuration suite software can be recognized by the T2 chip, in which case the repair can proceed normally. The software is required for repairs involving the display, logic board, Touch ID, flash storage, and more.

The following Macs have the Apple Silicon M1 chip:

Apple's T2 chip provides extra layers of security to Macs, which means your computer will only start when booted with Apple-trusted hardware. While this protects your Mac from hackers, it gets complicated if you want to boot your Mac from an external drive or network.

You will need to disable the boot security function if you want to do that. The following steps indicate how to disable the T2 chip’s Boot Security feature:

Step 1: Begin by restarting your MacBook. When the reboot starts, tap and hold the “Command + R” keys to boot to the recovery partition.

Step 2: When your Mac starts, log in using the administrator account. Now, go to “Tools” and select the “Boot Security Tool” option.

Step 3: After that, choose the options that read "No security" and "Allow booting from external media." Next, close the window and reboot your device.

Step 4: During the reboot, press and hold the "Option" key. When the available drives are visible on the screen, tap "EFI Boot."

The M2 chip is Apple’s 2nd generation custom-made silicon chip, which is an upgrade to the M1 chip. With an 18% faster CPU, a 35% more powerful GPU, a much faster neural engine, and increased memory bandwidth, the M2 chip is much more efficient than its predecessor.

Is it worth buying an M1 chip?

The M1 chip offers better performance, security, and efficiency than the Intel-based Macs. Despite being an upgraded processor version, the M1 Macs cost almost the same as the Intel ones. Thus, you can get enhanced functional capabilities in M1 Macs at nearly the same price.

What are the differences between Apple T2 and Apple T1?

The T-series chips were Apple’s first custom-built processors for MacBooks. The T1 chip was first introduced in 2016 and was the first-generation self-designed chip. On the other hand, the T2 chip was the 2nd generation chip released with the 2017 iMac Pro.
The T1 chip is based on an ARMv7 SoC that provides encrypted Touch ID fingerprint to Macs. T2 also helps in safekeeping the mic and camera of the Mac. The T2 features a 64-bit ARMv8 chip that serves additional security features. It includes Secure Boot and hardware shutdown of microphone and camera when covered.

Is Apple silicon the same as M1?

Previously, Apple used third-party processors and Intel CPUs in its MacBooks. Recently, the company decided to switch to its system on a chip or SoC processors. The M1 chip is Apple’s first silicon SoC used in Macs.

The T2 chip by Apple is used in old Macs and focuses more on security features. So, the M1 chip is a new processor that provides versatility and resourcefulness all in one. Knowing the basic features and the key differences between the two chips. You can now decide which better suits your needs after a comparative T2 chip vs M1.