BIK Format: What Is A BIK File and How to Play/Convert/Recover BIK Files?

The .bik file extension is a video format introduced by RAD Game Tools. This file type is mainly used for playing video games on different PCs and gaming consoles. Even though famous game developers widely use the BIK format, people often face difficulty opening and converting it.

If you are a newbie and have a hard time handling a Bink video, don't worry. We will take you through what is a BIK file, the programs that open a BIK file, and how to convert BIK to MP4. Let's get into it, then!

01 What Is A BIK File: Characteristics and Users
02 How to Open A BIK File
03 How to Recover Lost or Deleted BIK Files
04 How to Convert BIK to MP4

What Is A BIK File: Characteristics and Users

BIK file is a proprietary file format (extension .bik and .bk2) for video developed by Epic Game Tools (formerly RAD Game Tools). BIK files have video and audio compression algorithms and can easily support high resolutions. One of its best features is that it enables standard video compression without degrading its quality.

The BIK file extension has also been awarded several times for being an efficient and user-friendly file format. In addition, you could access it on all devices along with seventh-generation consoles.

How to Open BIK Files 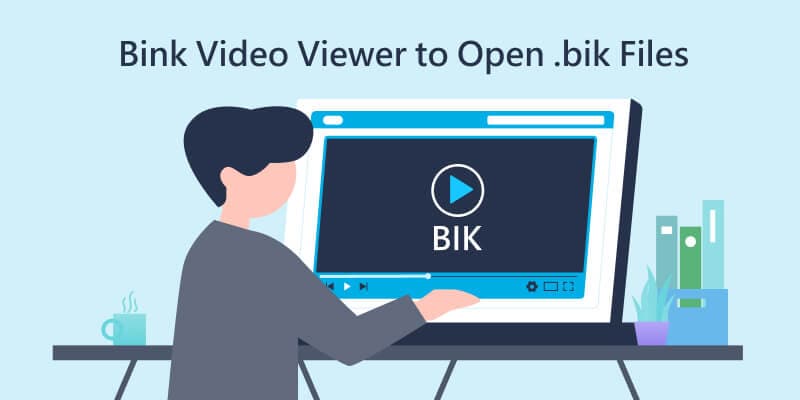 As we already mentioned, BinK video can be accessed on all devices, including Windows, Mac, Linux, Android, Mac, and iOS; however, your Windows needs to have the 7 Codec pack installed. If you don't have this installed, you can still open it, but it would flash a warning message.

Whether you are trying to open a .bik file on Windows, Mac, or Linux, all you need to do is have one of these free Bink video viewers.

How to Recover Lost or Deleted BIK Files

"I accidentally pressed no to back up my files when I did a full system restore to factory settings. So, no, I have lost all my files. How can I get them back?"

Recovering lost or deleted BIK files can be a confusing process for many. Still, thanks to video recovery software such as Wondershare Recoverit, you can get your lost or deleted video files back in a few minutes. Here is the tutorial:

Step1Choose the file location where you lost the BIK files.

Launch the Wondershare Recoverit on your PC. Once that's done, open the software and locate the folder you want to search for your lost file in, e.g., Recycle Bin.

Step2Scan and searching for your Bink videos

After that, Recoverit will automatically start scanning the whole folder for it. Keep the program open and wait for the scanning to complete.

Wondershare Recoverit will display the Bink video it has found. Go through them carefully, and when you are satisfied with the output. Click on the Recover button present at the bottom to save it on your PC.

How to Convert BIK to MP4

Why is converting BIK to MP4 important? Bik is a new addition to the world of file formats, so not many people are too comfortable using it. Besides, many outdated systems cannot open it, whereas the MP4 file format has been there for a long time and is playable on almost any device.

If this sounds familiar to you, you might have been looking for a way to convert your Bink video files to MP4.

If you have just one or two small-sized Bink videos, there is no need to download and install a BIK to MP4 video converter software. Here are some of the best online tools that can help you convert your BIK file to MP4 within a few minutes for free.

The aconvert.com is probably the best online free tool to convert BIK file to MP4. It has a simple, user-friendly interface filled with all the features you need to tweak your video and offers impressive outputs in multiple formats like MP4, AVI, WMV, MKV, MOV, etc.

All you need to do is: Upload your BIK files > Select the output format (in this case, choose MP4) > click on Convert button. 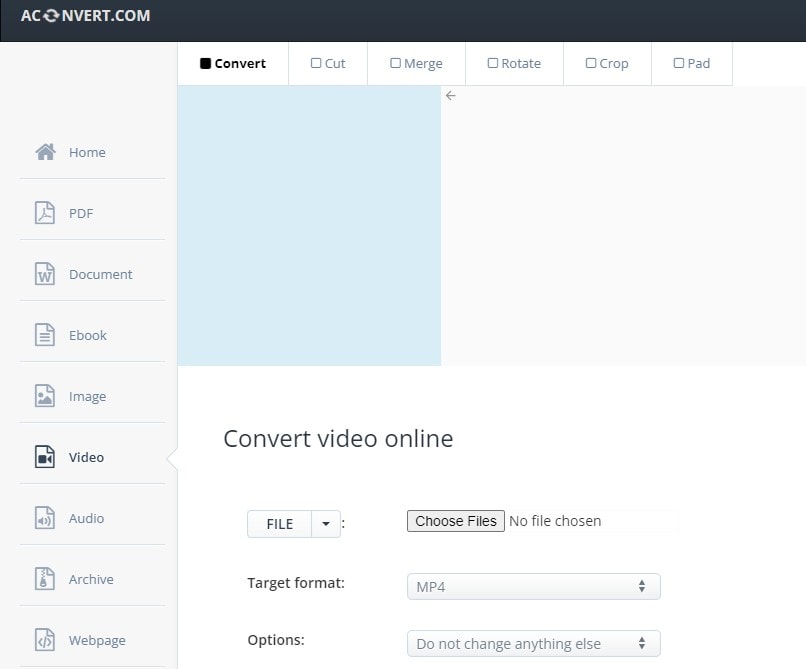 It is another free tool to convert BIK video to MP4 in web browser. It provides the advantages of changing the quality and other features of the video, such as the sound quality, resolution, bit rate, file size, and further details. You can add the Bink video files from the computer, Dropbox, Google Drive, or paste the URL.

If you have a long list of Bink videos waiting to be converted to MP4, it is recommended to use a video converter software. Compared to online converter, a desktop video converter can work without internet connection and has no limitations of file size and quantity.

Movavi video converter is a fantastic tool for uplifting the overall quality of your video, and that includes conversion, editing, and optimization. Apart from supporting the most popular video formats like MP4, MOV, AVI, MKV, etc., Movavi Video Converter can also help you convert your BIK files to the rarest formats, such as BIK to MKA, BIK to RA. 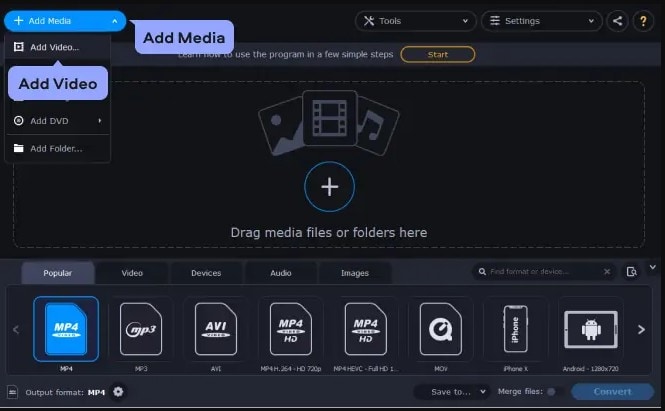 AnyMP4 is another excellent desktop software for converting BIK video files to MP4. It lets you convert your file to 500 different formats and works 70 times faster than other video converters in the market. Besides, you can compress your HD files and edit your video as well with AnyMP4 Video Converter. 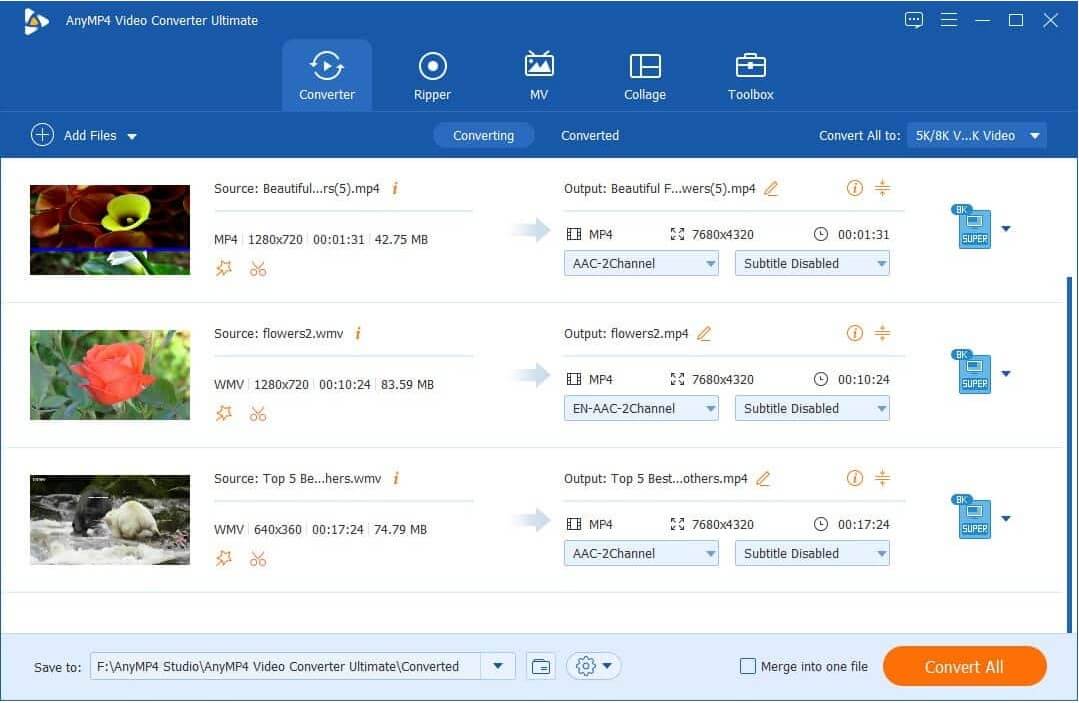 We hope this guide has helped you understand what is a BIK file and how to play Bink videos. File extensions such as .bik can sometimes be tough to handle; however, with the help of programs such as VLC media player, Movavi video converter, and Wondershare Recoverit, you can make the process easier.