NTFS vs exFAT: What's the Difference?

Are you confused about different hard drive formats? Here are some crucial differences between exFAT and NTFS File System: 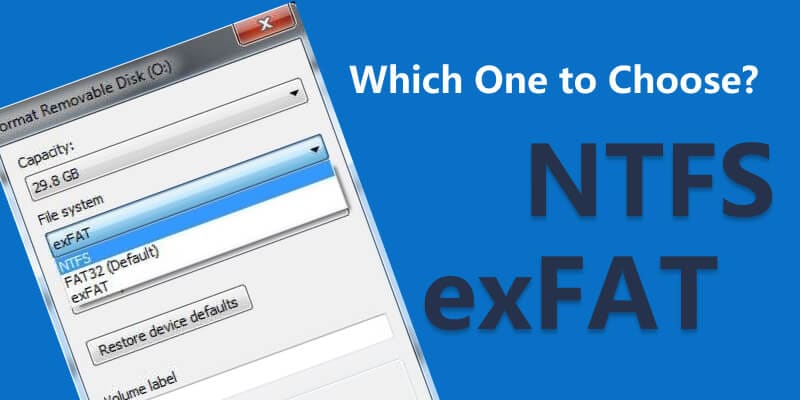 FAT32, exFAT, and NTFS are the three Windows file systems that may be used to format USB flash devices in a Windows-based environment. A more advanced variant of the original FAT file system used in the MS-DOS operating system is a mature file system called FAT32. Later, Microsoft released the NTFS file system, enhancing the speed and dependability of file operations. Microsoft finally launched the exFAT file system in 2006, primarily intended to be used in flash devices and machine setups with limited resources. Keep reading to find out the difference between exFAT and NTFS.

When setting up a new hard drive, one of these acronyms can be the first you encounter. Your computer will provide you with a format drive question. This often leads to a decision between an enhanced file allocation table and a new technology filing system. Due to their extensive compatibility and generous file and partition size limitations, these two filing systems are the most widely used in computing.

The term "New Technology File System" is an acronym for NTFS. Microsoft produced it and made it available for Windows NT and 2000 in 1993. NTFS was created to benefit from modern computer technology, which enabled features like journaling and built-in encryption techniques. Since then, it has evolved into a standard option for internal disks installed in a Windows system.

Microsoft also released the Extended File Allocation Table or exFAT. It was introduced in 2006 to take the place of FAT32. It works with earlier Windows versions. ExFAT is also designed with flash memory in mind. The purpose of this function was to increase the speed of USB devices and flash memory SD cards. 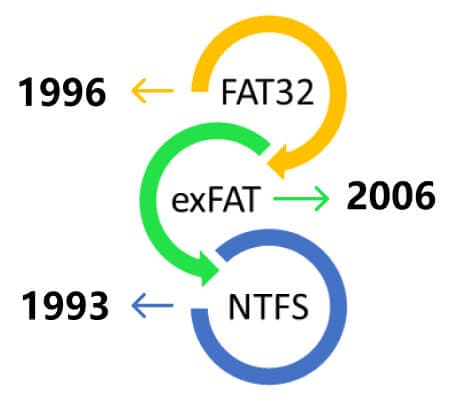 The SD Association accepted it as the standard file system for SDXC cards larger than 32 GB. ExFAT works with Linux and Mac OS X, and other operating systems. ExFAT is the format of choice for external hard drives, including external SSDs, to obtain the best read/write speeds.

Also read: how to convert exFAT to NTFS

The operating system's compatibility is crucial when choosing between exFAT, FAT32, and NTFS. Operating systems like Windows, Linus, and BSD may all use NTFS. Microsoft Windows, Apple Mac OS X, and Linux all support exFAT and FAT32.

ExFAT is often used as the format for external hard drives since various operating systems easily recognize it. NTFS is often selected when installing a new internal hard drive like SSD or HDD, particularly on a Windows machine.

Both file systems were created by Microsoft, although they served different functions. The goal of NTFS was to employ new technology to provide features that made file system administration and security more user-friendly. FAT32 continued to fill the requirement for simpler file system administration, nonetheless. A substantially bigger file and partition size than FAT32 are supported by exFAT, which was intended to be a lightweight file system.

Since its inception, exFAT has not developed enough to displace NTFS. Instead, it evolved into a supplementary file system that facilitates improved interoperability. In addition to hard drives or storage utilized by numerous machines running various operating systems, this is helpful for dual-boot computers.

ExFAT was created to be a lightweight file system similar to FAT32. However, without the added functionality and overhead of NTFS and the restrictions of FAT32. It is suited for flash devices.

ExFAT, like NTFS, provides generous file and partition size restrictions that let you store data considerably bigger than the 4 GB permitted by FAT32.

Also read: How to convert NTFS to exFAT

Compared to exFAT, NTFS has regularly been shown to be more effective and use fewer system resources. As a result, file management operations like copy, paste, create, and move are finished more quickly, and more resources are available for other operating systems or program duties.

ExFAT may perform better than NTFS regarding read/write rates for external disks accessible through USB. For this reason, exFAT formatting of external drives is often advised, particularly for gaming. 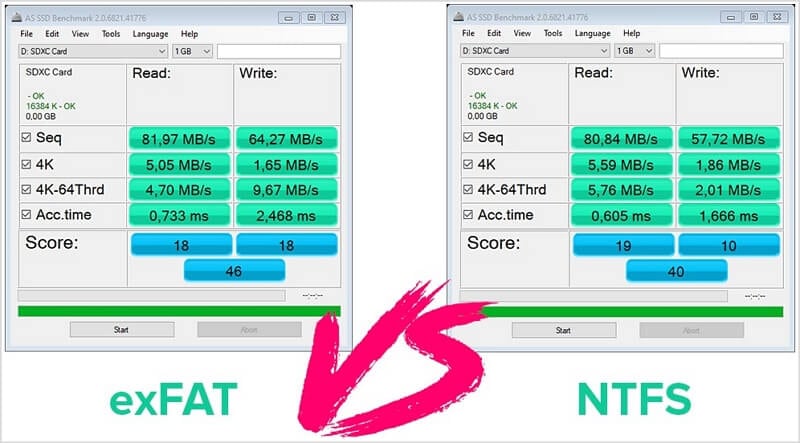 As a file system for internal drives, NTFS is quicker. ExFAT efficiency is regularly outperformed, and it requires fewer system resources. ExFAT performs more quickly, but when used as the file system for external devices since read/write rates behave differently when connected through USB and depending on the operating system.

ExFAT is required to get the read performance required for respectable gaming when using an external hard disk with installed games. NTFS processes smaller files more quickly than exFAT and FAT32. However, NTFS and exFAT are almost as quick when the files are of medium size. Large file reading/writing on USB devices, ideal for games and movies, is where exFAT really shines.

5.     Important Facts About exFAT and NTFS

Here are some of the benefits and drawbacks of exFAT and NTFS File System:

Advantages and Disadvantages of exFAT

When files are accidentally erased from the exFAT file system, exFAT may recover them

Restore the exFAT file system on Windows after formatting

No reasonable constraints on the size of files or partitions

Unlike FAT32, not as compatible

You may create a boot sector backup

Large files can be supported, and there is almost no reasonable restriction on partition size

When you run out of disk space, it helps to compress files, folders, or the whole drive

Allows users to establish disk quotas, which limits how much space may be used

No reasonable constraints on the size of files or partitions

The NTFS file system is inapplicable for computers running MS-DOS, Windows 95, and Windows 98

With a modest disk space, the NTFS file system is sluggish

Part 4: NTFS vs exFAT- Which One Should I Use?

The overall guideline is as follows:

This could not always be the case since certain software demands a particular format for external devices. But before formatting a disk, customers who need specific formats are typically aware of this. Format the disk according to the most common file size to be transmitted if you want to achieve the most excellent file transfer performance. ExFAT is substantially better at handling huge files than NTFS at handling large batches of small files. Watch the video below to learn how to format a hard drive to exFAT or NTFS.

Watch the following video to learn more about the difference between NTFS and exFAT:

Since external hard drives are portable, they are often utilized with different operating systems. ExFAT is a better choice since NTFS is less widely compatible outside of Windows. When writing big and medium-sized data to USB drives, exFAT performs better than NTFS. Read this article if you want to make exFAT data recovery.

The problem is that although Mac OSes can read from and write to NTFS, writing to NTFS from Mac requires external software. This implies that when you insert an NTFS-formatted thumb drive into a Mac, you may copy its contents but not change them or write to them, making it unsuitable for cross-platform sharing.

For storage devices running Windows, NTFS is the optimum format. ExFAT offers the most effective power and memory management for portable storage devices. You may also use a storage device on both Windows and macOS.

Choose NTFS on the detachable disk if you wish to transfer your data to a different machine with all the same decryption certificates installed. Your data are then transparently available on all authorized machines while yet being encrypted in transit.

However, there is no way to instruct Windows to instantly decrypt a file when it is transferred to external storage if you often share data between computers without the decryption certificates. On the other computer, you won't be able to access it if you neglect to decrypt it manually. ExFAT is a good option if you do this often on the detachable disk. Any files you copy there will, after that, be automatically decrypted.

The preferred file system for internal hard disks in Windows PCs is NTFS. Although exFAT is a more sophisticated version of FAT32, it is less compatible with older hardware and software. The preferred format for external hard drives is exFAT. It offers quick reads and writes across many operating systems.

Compatibility of the operating system is important when deciding between exFAT and NTFS. Here are some of the frequently asked questions.

Why should I not use exFAT?

If you wish to store many extremely few files on exFAT, that's a horrible idea. For instance, a 500KB file would require up to 12% more space on the disc due to the 64KB block size, primarily images and videos.

Is exFAT slower than NTFS?

NTFS is more resource-efficient than exFAT. This speeds up a copy, paste, new, and move, freeing up OS or application resources. ExFAT may outperform NTFS on USB devices, and external exFAT disks are recommended for gaming.

Is there a downside to exFAT?