I bought a Pi 3 already set up for playing retro games. It's running a micro SD card. I wondered if I could clone the card the same way I cloned my hard drive a while ago. I'm about 3/4 thru a game I don't want to lose.
If I could clone it, the game should be the exact level I'm if it's the same as cloning a drive. I'm not a tech person at all and would hate to lose my game, and worst have to contact the company for a new card.
I wish it could be as easy as drag and drop.

Creating clones for the internal or external storage media containing data is as essential as performing any other system task. Making clones will ensure the safety of data against data loss consequences. Moreover, creating clones will also help you restore the storage space by saving clones on other storage media and evacuating the storage media to save new data sets. The same goes for cloning raspberry pi SD card. Using the raspberry pi as the working system, you can generally attach the external storage media, i.e., the SD card, and create a clone for that SD card to make space for new data. This article will help you to get answers on how to clone SD card for raspberry pi.

Revealing insights about Raspberry pi, it is a series based single board computer, a product by Raspberry pi foundation. Throwback to 2012, when raspberry pi was initially launched as a single-core 700MHz CPU with 256MB RAM. To date, raspberry pi is revolutionized up to quad-core 1.4GHz CPU with 1GB RAM. It works like a regular computer; hence, one can easily attach external storage media to store data. This article deals with a work case scenarios of cloning raspberry pi SD card or clone raspberry pi SD card windows 10. It would further explain the insights linked to raspberry pi as a computing system and regarding a third party software for how to clone an SD card for raspberry pi. Here are the topics that would be discussed in detail.

Raspberry Pi is a small credit card-sized computer system; it works as a functional CPU, which, when connected to a monitor and other input/output devices, performs all the tasks as a conventional PC. This small computing device helps to learn various computing skills, including programming languages, building hardware projects, and undergoing home automation and industrial applications. One can quickly learn computing languages like Scratch and Python via Raspberry pi. Like your standard PC, the raspberry pi is capable of browsing internet play ultra-high-definition 4k videos, creating, work documents, spreadsheets, and playing games.

Moreover, the Raspberry pi is employed for making digital maker projects, used as a music machine, acts as a parent detector, deployed to weather stations, and help to tweet birdhouses with infra-red cameras. In general, Raspberry pi can be regarded as a computing machine that acts as a guide to learn various computing skills over it.

Talking about the operating system, Raspberry pi runs Linux and carries a set of GPIO (general purpose input/output) pins for the connection of electronic components and to use various internet of things. Another plus point that makes it worth using is the price. As compared to other conventional PC, Raspberry pi just cost $35. Due to its pocket-friendly cost, it can act as a low-cost server. It is capable of handling light internal or web traffic.

All these advantages make Raspberry pi to be employed in the industry for working as a conventional computing system.

As mentioned above, the Raspberry pi can be used as a gaming station or media enter. In these situations, most of the time, SD cards can easily be corrupted or crashed. The result would be data loss. To avoid such circumstances, the SD cards are cloned. Moreover, if you intend to upgrade the raspberry pi SD card, the process is the same, you have to clone raspberry pi SD card windows 10.

Cloning raspberry pi SD card can be done via various processes; out of all, the most straightforward way is to utilize third-party application software. In this regard, AOMEI backupper is the best choice. It is one of the best cloning software that helps to clone raspberry pi SD card windows 10. For initiating the cloning technique, here are the steps to follow:

Step 1: Unmount the SD card from Raspberry pi and download the AOMEI software on the device.

Step 2: Run a successful installation of software and launch it on the device. In the main interface of the software, select the option of clone followed by selecting disk clone.

Step 3: In the disk clone window, select the targeted SD card as a source destination. Click next to continue.

Step 4: In the next window, select the destination drive i.e., the location where you intend to store the clone of the SD card. You either choose a new SD card or any other external hard drive, flash drive, CD/DVD, etc. cluck next to continue.

Step 5: Further windows will appear for the configuration of the procedure. You can edit the partitions of the destination drive/disk to proceed with the process of cloning without impedance. The software also provides the option of Align partition to optimize SSD. Once the setup is complete, click start clone to initiate the process. 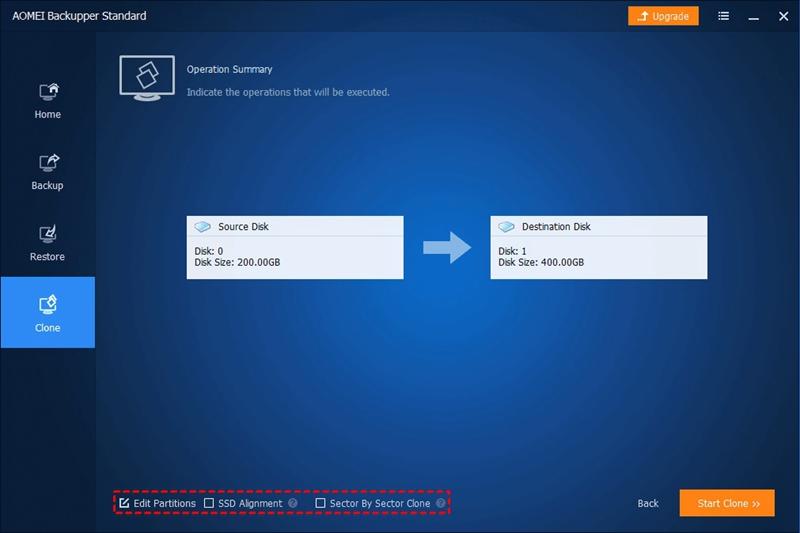 As soon as the process is complete, the clone created for the raspberry SD card would be automatically saved to the destination disk/drive. AOMEI backupper also allows for creating various backups and restoring the lost data due to system crashes.

Hence, Raspberry Pi is a reliable small-sized computing system that has the potential for running all computing programs efficiently. It is capable of carrying out all standard procedures which are controlled via conventional PCs. The Raspberry Pi can be used by the beginners to learn various computing languages, creating projects that can be employed for industrial setups. Just like regular computers, external storage media can be attached to the Raspberry Pi. The same goes for the SD card. For avoiding the consequences of data loss, it is advised to undergo the cloning raspberry pi SD card. It could be done to create space for new data sets, avoid data loss due to system crashes, etc. this article gave deeper insights regarding the computing potential and advantages of using Raspberry Pi as a system. Moreover, third-party application software is also recommended about the methods for cloning raspberry pi SD card. AOMEI backupper is the third party cloning software that can be employed to clone the SD card efficiently.